David Sedaris is very funny. submitted by Jen Chapin-Smith on August 28, 2012, 11:24am Like everything by David Sedaris, "Holidays on Ice" is absolutely hilarious. I particularly liked his story about sending people to the Santa not of their choosing.
My one criticism is the author's use of the word "retarded" and his negative portrayal of people with cognitive disabilities.
David's sister Amy Sedaris has starred in numerous funny movies and shows including "Strangers with Candy," which is also available at the Ann Arbor District Library.


Pretty funny submitted by kelleyc on June 22, 2016, 12:30pm I particularly enjoyed the first two stories - Amy Sedaris is a real laugh. She reads with so much character. And of course, David Sedaris is as funny as ever.

They make a great team! submitted by mickplu on July 21, 2016, 9:25pm David Sedaris and Amy Sedaris narrate this series of hilarious holiday stories.

A holiday must read submitted by wysea on June 28, 2019, 9:13am I have a yearly tradition in December to reread this book. David Sedaris has a magical eye for finding the absurd in everyday life and describing it in a magical way. Pure genius.

funny submitted by rincess on August 9, 2022, 11:50am A pick me up for the holidays or if you need something to make you laugh 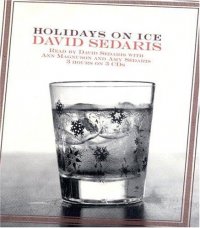