DVD - 2010 DVD Comedy Cyrus None on shelf No requests on this item Community Rating: 2.8 out of 5 Bonus features: deleted scenes, theatrical trailer.
John C. Reilly, Jonah Hill, Marisa Tomei, Matt Walsh, Catherine Keener.
A quirky, hilarious story about love, family and cutting the cord. Not-so-recently divorced John thinks he's finally found the perfect woman when he meets the sweet and sexy Molly. There's just one problem, Molly's son Cyrus clings to his mom like lint on a T-shirt, and he's not about to let another man come between them. It's one hysterically awkward moment after another as John and Cyrus fight for the right to be Molly's #1 man.
DVD, region 1, widescreen (1.85:1) presentation ; 5.1 Dolby Digital (English), Dolby surround (French and Spanish).

cyrus... submitted by lekendrick on October 24, 2011, 4:26am this movie was disappointing more for scripting & themes insensitivity dealing serious, subject matter it makes light relationship single mother an son painting as, semi-sexual! With sons of single mother prone stealing from the romantic interest an even assaulting such a good guy willing take risk after all! Its very quite little by way of even handed treatment such subject matter & largely made my mind up hill, jonah for all his antics little by way heart as well!

Cyrus submitted by emjane on July 14, 2012, 8:51pm Like most indie films, this sort-of comedy, sort-of drama starring John C. Reilly, Marisa Tomei, and Jonah Hill, presents interesting, funny characters, but also seems to end about 15 minutes before the storyline does (which can be frustrating).

The premise: John (Reilly) is not doing so hot with his life until he meets Molly (Tomei) and really falls for her. She’s crazy about him too, but it’s complicated by Cyrus (Hill), her grown son who she is incredibly (kind of creepily) close to. Cyrus, upset that there’s another man in his mother’s life, pretends to accept John while secretly attempting to undermine him.

Generally, the movie was pretty funny, and Reilly, Tomei, and Hill were all fine actors, but something didn’t make it there for me. Perhaps it was the lack of closure, but, in addition to that, the movie was kind of predictable. I don’t mind a predictable comedy, but since Cyrus was obviously trying to be something more, I wanted a surprise or two.

Don’t get me wrong; Cyrus is still worth watching if the concept intrigues you. It employed a neat technique of putting a sort-of montage of scenes over a single scene’s dialogue, to indicate time passing and relationships changing. And it did a super job of making the relationship between Cyrus and Molly weird, but not too creepy. And, it did make me laugh out loud, more than once. 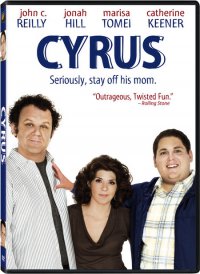