Deconstructing Yourself submitted by jaegerla on April 16, 2011, 10:55am This is really something. It's a great touch how she incorporates so many author's works into her life story. Like using literary analysis on your own memoir.

Intertextuality submitted by prlhw on June 18, 2012, 5:36pm There are a ton of great references in this book to other awesome works of liteature, and Alison does a wonderful job weaving them all together to tell her and her father's story. Truly an amazing book!

Great submitted by nicole on June 18, 2013, 4:00pm So many great book references. The first page has a copy of Anna Karenina drawn partially into a frame, and the entire story reflects a lot of themes from that book as well. That sort of reference is constant and I got nerdily excited every time I picked up on one.

Growing Up Gay submitted by Jen Chapin-Smith on July 23, 2013, 9:53am Alison Bechdel, most famous for her comic strip "Dykes to Watch Out For" tells her coming-of-age and coming-out story in this first of two graphic novels. "Fun Home" (which is short for "funeral home," as her parents ran the town's funeral home) tells the story of her parents' unhappy marriage and all the homophobia and other problems Alison and her siblings dealt with as children.
Most of the book takes place in a small town in the 1950s and 1960s, with the occasional trip to New York City. This includes a visit to Greenwich Village shortly after the Stonewall uprising. Bechdel re-creates the famous image of the window on which the Mattachine Society wrote a plea for peace.
As she comes out, Alison learns far more about herself and her family than she ever wanted to know. The plot includes quite a few unexpected twists.
While it's called a "tragicomedy" the book is mostly sad, with the occasional joke. So, be prepared for a few tears.

Family is complicated submitted by Judeyblu on July 29, 2016, 9:18pm The memoir is the basis for the award-winning Broadway show.

Big Reputation submitted by Meginator on August 24, 2017, 9:21am I came into Fun Home expecting something a bit different than it was, probably because of its reputation. It's a fine graphic memoir and I'm glad that it has touched many people so deeply, but I couldn't really relate to Bechdel's struggles, even the ones that I shared. I can appreciate the artistry and the deep personal introspection that went into creating this work and admire Bechdel's creativity and craft; this is a beautifully drawn book and the illustrations are fundamental to understanding the story. Overall, this book was not for me but I recognize its potential and importance.

Interesting submitted by satz on July 3, 2018, 12:33pm This was a really complex and interesting book. It was cool how the author depicted her own life experience through other literary works. This book is one that deserves a second read.

heartbreaking but also great submitted by Stinglikeawalrus on July 26, 2019, 10:37pm I read this after listening to the musical, and I have to say I think I liked this book more. It's a great story of someone growing up and realizing their queerness. Heartbreaking, as well. I perfectly shows the toughness and complexity of the authors relationship with her father.
I really like this and it was a pretty quick read as it's a graphic novel.

Over My Head submitted by chowcy on August 12, 2019, 4:16pm Although I know many will appreciate this book, I personally felt that you had to be highly educated to read/understand this book, not just because Bechdel's vocabulary is pretty expansive, but also because there are A LOT of references to literature: Proust, Ulysses, etc. My eyes glazed over for some portions because I just didn't know enough about a literary work to understand the parallel Bechdel was making. The parts I did understand were okay.

A must read!!! submitted by rmhawkins on July 30, 2020, 9:46am There is alot of hype about this graphic novel and it is worth every word of praise. A must read!

If you wanted to learn more about Alison Bechdel's life, this is your book! submitted by valeriemates on June 27, 2021, 11:41am This autobiographical graphic novel follows Alison Bechdel's life from her early childhood, growing up in her family's small town funeral home business, through college. She discusses mental illness, homosexuality, suicide, and the relationships between the members of her family. She and her father are both very literary. Bechdel is gay, while her father had a history of gay relationships in a time when it was much harder to be gay, and the parallels between them are striking. Her father died young, possibly by suicide, so Bechdel does a lot of looking back at his letters and her memories of him to try to piece together the truths about who her father was and what happened to him.

Overall, sometimes the book felt like I was peering into Bechdel's family's dirty laundry, which I didn't feel right about looking at, but other times it felt like an unusual coming-of-age story that had real insights into life.

I'm glad I read it, but I think it would be most interesting to someone who has read a lot of Bechdel's work and wanted to learn more about her past.


worth a read, and re-read submitted by nemiller on July 31, 2021, 12:31am This is an amazing memoir. Wonderful interplay of words and pictures. There are so many details and references crammed into the drawings, you will notice something new every time you read it. 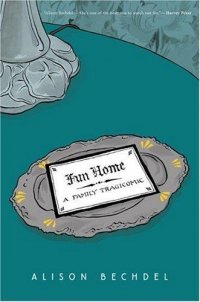