"After the tragic death of their father, Emily and Navin move with their mother to the home of her deceased great-grandfather, but the strange house proves to be dangerous. Before long, a sinister creature lures the kids' mom through a door in the basement. Em and Navin, desperate not to lose her, follow her into an underground world inhabited by demons, robots, and talking animals. Eventually, they enlist the help of a small mechanical rabbit named Miskit. Together with Miskit, they face the most terrifying monster of all, and Em finally has the chance to save someone she loves" -- from publisher's web site.

Amulet submitted by Brad B. on December 6, 2010, 1:46pm You need to check out the Amulet series by Kazu Kibuishi, the legendary creator of the Flight Anthologies, if you haven't yet. It's amazing how Kibuishi can convey so much action with just a few scenes. And, the storytelling is top notch. I get the same chills of excitement reading this as when I, say, first started reading Bone. It's that good, and I can't wait for the next one. Take a peek at this all-ages fantasy romp about a girl with a magical amulet and a very unique destiny and you won't be disappointed.

Pretty Good submitted by Ying Zh on June 30, 2011, 8:13pm I think this book is filled with imagination and creativity. The story is somewhat sad but at the same time most alluring. I would recommend it to people would liked Star Wars.

lovely, but intense! submitted by camelsamba on August 23, 2011, 10:22pm The artwork in this graphic novel is lush, evocative, and beautiful. The storyline, however, is pretty intense (father dies in car accident, mother ripped away from children by a scary creature - more than once!, etc). More sensitive youngsters (such as my 11yo son) might get overwhelmed.

intense submitted by morganf on July 10, 2012, 12:20pm Amulet is a sad yet awe inspiring book. The art is amazing and the storyline is very interesting, though everything happens to quickly.

Popular, but a bit cliche submitted by wampishing on June 24, 2013, 2:51pm Emily, Navin and their mother move into a dank, abandoned family home after the death of their father and husband. When poking aroun in her great-grandfather's puzzle lab, Emily happen upon a strange alter, which, upon taking her blood, bestows a beautiful amulet on her. After receiving a vague warning from the amulet, Emily watches in horror as an otherworldly monster steals her mother away. Unwilling to lose another parent, Emily and Navin follow their mother to a parallel world, a world that, by taking the amulet, Emily now owes a particular responsibility. But while the Amulet and the magical powers and advice it bestows help the pair chase after their mother, how can they really know that the talking stone - and their great grandfather, who owned it before - had good intentions? Kibuishi's art style takes clear reference from the manga tradition, with his characters' big eyes an simple faces. However, his use of thin line weights and soft, muted colors stands in opposition the manga style's heavy reliance on thick lines and deep blacks. The simple art lacks a certain dynamic quality, relying on soft color gradations to lend mood and feeling to panels. Certain story beats feel incredibly familiar - the traumatic death of Emily's father, for instance, seems somewhat cliche, and several elements of the parallel world, though imaginative, clearly reference other works. This story, while perhaps not the most original, still delivers with an entertaining plot using visuals that hearken back to the beginning of the story to give later occurrences more emotional weight.

Amazing art but not good story submitted by xiwang on June 29, 2013, 8:00pm The art in this book is breathtaking and gorgeous. It just shows the power of picture. The images are forlorn and a bit creepy which I love. However, the storyline is not that good. It is kind of typical and predictable. If Kibushi had just thought of a better story, this book would be amazing.

Okay submitted by emeloche on August 9, 2013, 9:54am Emily finds a magical amulet in the old house that she, her brother Navin, and her mother move into after her father dies. When her mother gets taken by a mysterious monster, Emily follows the instructions the amulet gives her in an attempt to get her mother back-- but should she trust the messages from the necklace, or be wary like Navin?

The highlight of this graphic novel are the creative creatures created by Kibuishi-- in a world somewhat reminiscent of Carrol's Wonderland, squid-like monsters, sentient stuffed rabbits, and grumpy robots all coexist. Imaginative readers will love the possibilities that the parallel earth of Amulet provides, though readers should beware that the story can get quite scary and that the dangers of death are present.

The art of Amulet is basic, and while it gives suggestions for how readers can picture the characters and action, it doesn't add much to the story on its own. However, the readers who are drawn into Amulet's story will likely have the imagination to fill in the blanks that the art leaves.


Great submitted by Fishing Rainbow on June 16, 2014, 6:33pm Great start to a awesome series. I loved it from the very beginning . It was very magical and interesting.

My kids love it submitted by juanc01 on July 12, 2014, 8:54pm They can't wait for the last volume to come out. Story has too many reused tropes for adults

Awesome! submitted by cbernhar on June 23, 2015, 5:04pm I think this is a great series for kids because it is adventurous and the art is great. It's a great book for kids but I don't think adults would like it very much. If you like adventure and graphic novels you will like this. I have read it and I am a kid and I think it is great for kids.

A fun adventure submitted by audreyh on June 26, 2015, 7:11pm I really enjoyed this comic, but I'd say it's not a particularly challenging or groundbreaking work. The art is the strongest aspect of the series. Alledia is a well developed visually, and the illustrations are amazing. However, I thought the story was on the weak side, leaning heavily on cliches and familiar hero's journey-type tropes. I don't think experienced readers will find the series has many surprises for them, but it's still an enjoyable read overall.

Amust read submitted by raymondkangasjr on July 1, 2015, 9:11am Really enjoyed i. I have read all of them now.

awsome submitted by Lilymarie on August 21, 2015, 11:33am in fifth grade i was so hooked in this sereies

amulet submitted by colettiennerenepollard on July 7, 2016, 11:34am I think this book is amazing! it has a lot of adventures and stuff. I would recommend this book to people who like adventures.

INTENSE submitted by juliabryant on August 31, 2016, 7:29pm I think this book was very intense and thrilling. I just started to read this series because it was a new selection of books at the library it was a very nice book, and I will continue on to the next books in the series at The Downtown Library, I thought the death of the dad was very sad and the mom getting eaten by a Monster was pretty graphic with the blood coming out of the mother's nose, but overall it was pretty addicting to read. It was a bit scary like one of those books where you don't want to be like "Dinner's ready!!!" and your at a bad part, or you will have the thought about it while your reading so I reccomend reading it in one time untill you get to a part which is not that bad.Therefore, this was a nice book! :) lol xD

I Love It submitted by nadyadmatish on July 3, 2017, 1:40pm It was really awesome, and a great adventure.

Amulet submitted by Lila F. on June 18, 2018, 6:55pm Thse books are so adventurous and interesting! Would definetley reccomend this series!

Amazing, I never thought I would like this submitted by 2030karthikeyanmayak on August 18, 2021, 2:57pm Amulet was so good that once i started reading I could not stop. I had to go to the library 5 times a week to get the next book. I love Graphic Novels and i loved this book!

Amazing, I never thought I would like this submitted by 2030karthikeyanmayak on August 18, 2021, 2:57pm Amulet was so good that once i started reading I could not stop. I had to go to the library 5 times a week to get the next book. I love Graphic Novels and i loved this book! 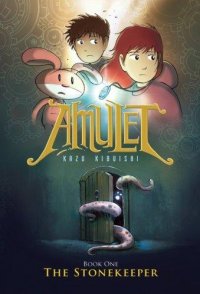