Story by J. Michael Straczynski and Mark Protosevich.
DVD release of the 2011 motion picture.
Bonus features include: commentary by director Kenneth Branagh ; 4 deleted scenes with optional commentary ; Road to the Avengers featurette.
Chris Hemsworth, Natalie Portman, Anthony Hopkins, Tom Hiddleston, Stellan Skarsgard, Colm Feore, Ray Stevenson, Idris Elba, Kat Dennings, Rene Russo.
When the arrogant warrior Thor is banished to Earth from his homeworld of Asgard, he must fight to reclaim his lost powers. Pursued by an invasion force sent to destroy him, the fallen God of Thunder must rise to the battle and learn what it takes to become a true hero.
DVD ; widescreen (16:9, enhanced) presentation ; Dolby digital 5.1 surround.

THOR submitted by honordenver on June 20, 2012, 2:16pm This movie was a great movie action and adventure filled it included the frost giants and Loki the all time super bad guy.

okay submitted by jmock on June 27, 2012, 5:22pm This movie was sort of uninteresting and the plot was flat. But then again, I watched this after seeing The Avengers

good submitted by ftan on July 16, 2012, 4:04pm this movie was good. i liked that they casted natalie portman. however, i was disappointed when she didn't play a role in the avengers. i saw thor on an airplane screen, so i'm sure it is much better on a larger screen. i recommend this movie to all ages.

amazing submitted by vadnala on June 14, 2013, 1:35pm the movie does a good job combining mythology with modern drama

Decent submitted by crazypockets on July 13, 2013, 1:23pm This isn't the best of the new Marvel movies, but I liked it. It was fun to see all the Norse mythology come to life, and I liked that they had Stellan Skarsgard in it. It's a good summertime, action, comic book movie.

Great if you're a comic book hero fan, OR love hunky, blond, nordic dudes submitted by hathaway1066 on August 3, 2013, 10:05pm Basically a vehicle to launch the Thor franchise in order to boost the Avenger franchise, but not as bad as the Capt. America movie, so, you know, if you can't find anything better to do with your time, go for it!

Thor submitted by chioma on July 8, 2014, 1:53pm This i s a really amazing good movie, of thor loosing his power to pick up his hammer and falling in love with Jane Foster

Not the best submitted by KJRULEZ on July 25, 2016, 9:47pm Definitely the most disappointing of the recent MCU movies. Not awful, just kind of meh. Doesn't leave a lasting mark in the memory. The action is good, the special effects are excellent, and Loki is wonderful, but Thor and the humans are all whatever.

Thor submitted by SBNB on June 15, 2018, 3:35pm When I watched it the first time, not realizing it was part of a larger universe (Marvel Cinematic Universe), it seemed cheesy and not fleshed out. Watching it the second time was much better, especially when I could watch The Avengers and the second Thor in quick succession.

It's ok submitted by tcrbondy on June 16, 2018, 7:02pm The best thing this movie did was introduce Thor to the Marvel Cinematic universe. If you haven't seen his newer iterations, start here. But Thor Ragnarok is the best

Thor submitted by lstorc on August 6, 2018, 2:55am Of the Thor movies, I would rate this second to Thor Ragnarok.

Good submitted by anacoluthon on August 18, 2018, 12:42pm Probably the weakest of the MCU movies, but enjoyable.

Early MCU submitted by terpsichore17 on August 31, 2018, 12:02am Introduces Thor, Loki, and Asgard. Natalie Portman was, unfortunately, lacking all chemistry. Kat Dennings and her tazer, though: that's pretty much Chekhov's gun that gets fired in Ragnarok. 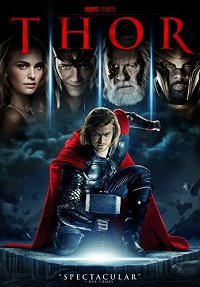