Not great, but good submitted by AMP35 on August 28, 2011, 12:10pm This X-Men film may come as a disappointment to many hardcore X-Men fans dude the fact that it's not the original five first X-Men from the comics featured in the film. It doesn't make much sense as a prequel (seeing how Emma Frost is a teenager in Wolverine Origins and she is adult in this one). This film does a better job than the other X-Men films of showing the alienation that the mutants feel from homo sapiens, but it's really Michael Fassbender as Magneto who steals the show. Could have been a lot better but it's got it's moments.

outside of? submitted by lekendrick on February 9, 2012, 12:45am the cartoon like nature some of character admittedly not yet shown, but be covered aside as for background plotting or story it's probably best of x-men movies & it's just sparse sometimes the younger versions these characters familiar most! Centering tried an true not quite, enough be seen specifically, w/ sonic boom or the tornado guy it's really now, but fine submarine footage is wonderful specific time period placement does whole lot film...

Decent submitted by crazypockets on June 16, 2012, 2:57pm I'm sure a lot of the X-Men purists would disagree with me, but I thought this wasn't bad. Some of the CGI and costuming (particularly on the Beast) was a little cheesy, but other than that, it had some good action and character development. Michael Fassbender and James McAvoy gave solid performances. All-around, it was a fun movie if you don't get too muddled into the details.

Comic Book Movie submitted by ima_rom on July 15, 2012, 4:51am A thoughtful but not very exciting comic book movie.

Discrepancies submitted by Jen Chapin-Smith on August 12, 2013, 11:32am X Men fans may like, but not love "First Class," which tells the story of how Charles Xavier and Magneto met and brought together the first group of mutants. Most of the movie is set in the 1960s and portrays the sexism of the era. However, the film makers incorporate much of this sexism into how the movie actually depicts its characters. One would hope for something better in a movie released in 2011. The film also has very few actors of color.
Hard core fans might wonder about the discrepancies between this film and the original X Men trilogy. For example, "First Class" has a different story like for how Charles Xavier's spinal cord became injured and when he and Magneto parted ways. One also wonders how Xavier managed to keep his school a secret if the FBI already knew that he led the mutants and housed them in his mansion (whose address the FBI already had).
In all, "First Class" is OK as mindless entertainment, but still leaves a lot to be desired.

Best X-men movie in my opinion submitted by williamc on July 16, 2014, 12:57am First Class > DOFP > X-men 1 and 2
First Class had a better soundtrack and better character development

AWESOME! submitted by tom m. on August 4, 2014, 4:25pm It was a great addition to the X-Men movies. Interesting twist in having the "X-Men" being a younger crowd. Highly recommended.

Eh submitted by cowmooflage on July 23, 2015, 8:49am I was very disappointed watching this movie. The overall production value of the movie was so low it was distracting me from their small reaches towards a plot. The costumes were cheap and embarrassing and often didn't fit the time period at all. The plot was boring and there was no character development. Potentially interesting characters were underutilized and annoying side plots were over embellished. This movie doesn't feel at all like the other X-men movies and is leagues away from being in the same category as other Marvel movies.

Okay movie submitted by toschag on August 3, 2016, 12:48pm I felt like too many new things we introduced during the story, which was hard to follow. Also falls into the camp of a punch-a-thon near the end.

A great prequel submitted by tcrbondy on June 16, 2018, 7:05pm Somehow they took many of the character, made them younger, and added more, and made the characters far more enjoyable than the original trilogy!

X-Men First Class submitted by lstorc on August 6, 2018, 2:59am It was entertaining, but lacked a Marvel feel

Alright submitted by c_zhang on June 29, 2019, 1:12am It didn't really feel like a Marvel movie, but it was decent. I thought there was a lot of action in the last part of the movie, which felt weird. 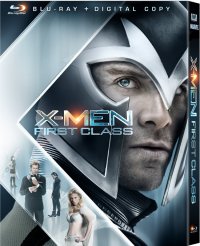