DVD - 2011 DVD Horror Scream None on shelf No requests on this item Community Rating: 4.1 out of 5 Originally released as a motion picture in 1996.
Special features include commentary by Wes Craven, trailers, tv spots, production featurette, behind the scenes, Q and A with cast and crew, special effects gallery, cast and crew profiles, did you know?
Courteney Cox, David Arquette, Matthew Lillard, Neve Campbell, Skeet Ulrich, Drew Barrymore, Rose McGowan.
A masked killer is on the loose and only the knowledge of low budget horror films can save the teenagers of the town.
DVD; NTSC, region 1; Dolby Digital 5.1 Surround sound; widescreen (2.35:1)

I Like Scary Movies (Apparently) submitted by Meginator on June 23, 2019, 11:03pm Do you like scary movies? This one's great, and a good film for viewers who aren't usually horror fans. The filmmakers somehow manage to achieve a balance between sending up the slasher genre and crafting an independently satisfying slasher, and an all-star cast plays their roles to perfection. The characters are fully aware of the genre's tropes, yet they still find themselves in constant peril; nor can first-time viewers anticipate all of the story's twists and turns. For all of its gore (and it is gory, but probably not overly so for a slasher), the film is fundamentally funny without undermining its scary, serious undertones. It's an ambitious film, but its respect for its predecessors makes everything come together in the end. 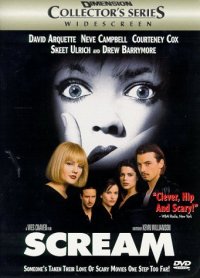