DVD - 2005 Youth-DVD Disney Tarzan 8 On Shelf No requests on this item Community Rating: 4 out of 5 This movie made me cry! submitted by ehm on June 28, 2014, 12:30pm This movie is amazing, but I cried when Tarzan's human parents died! I love that he grew up with the monkeys and it was really funny when he had to learn to be a human again.

Great submitted by steveiew on August 19, 2015, 2:50pm Great interpretation of this classic tale.

Disney's Tarzan submitted by Fevvers - STAR473 on July 6, 2016, 5:06pm The animation is up to the Disney standards of the time, and has some beautiful sequences. The cast is also pretty great. The story is rather thin, and could've done with a little more nuance to flesh out the characters and feel more engaging. I enjoyed the animals and Jane, but the other characters, including Tarzan himself, just weren't distinctive for me.

Great music! submitted by Xris on June 26, 2018, 12:30am Phil Collins did a great soundtrack with awesome songs to sing to! They also put an interesting twist on Tarzan! Loved the comedy from Rosie O'Donnell, too!! 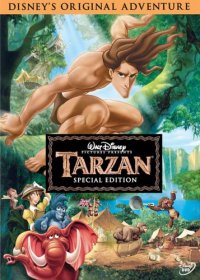