Originally released as a motion picture in 2010.
Frey Ranaldo, Ronald Bronstein, Sage Ranaldo, Eleonore Hendricks.
Formerly known as 'Go Get Some Rosemary'. Divorced and alone, Lenny is the father of two young boys he gets to see a couple of weeks a year. He cherishes these days with the kids, being both stern parent and lovable buddy, inventing myths and somehow living them, all while working overtime in the big city. When the going gets tough, Lenny uses some unusual, perhaps even hazardous, techniques to keep the kids safe from the world.
DVD, widescreen.

Wow submitted by jibkidder on July 26, 2022, 6:46pm This is a heartstopping movie for a parent to watch. Really some highly triggering child abuse here. That said, I think this is a very interesting film. The Safdie's based this around experiences they had with their dad, here depicted by "Frownland" director Ronny Brownstein, and in it they really fine tune their use of stress and an emotional engine, which they go on to use to amazing effect in "Good Time' and "Uncut Gems". The kids are Lee Renaldo's children! 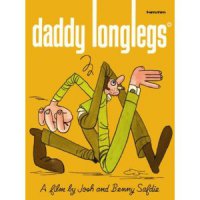