Originally released as motion picture in 1990.
Based on the novel by Margaret Atwood.
Natasha Richardson, Faye Dunaway, Aidan Quinn, Elizabeth McGovern, Victoria Tennant, Robert Duvall.
Set in the near future, the handmaids of the title are women who can still bear children after the ravages of war caused wide-spread sterility. One of the handmaids, Kate, is caught trying to escape the Republic of Gilead and sent to the prison-like training center. She is sent from there to the home of the commander to bear his child, but revolutionary forces have other plans for her!
DVD; widescreen.
Contents: Handmaid's tale.

pass submitted by KOH on August 27, 2018, 3:13pm Considering the rich source material and excellent current TV series, this is laughably dated in comparison.

Worthless garbage. submitted by Tassos on April 19, 2019, 1:18pm a famous book has been slaughtered again when they try to make a movie out of it. RIDICULOUS.

I still saw it with lots of fast forwards and moving to the next STUPID scene.

BTW, what is it with all the LUDICROUS blackened Lincoln Town cars from the 70s and 80s, the cheapskates that made the movie had tens of millions to pay Duvall and Dunaway and Richardson but could not commission a few CONCEPT CARS for this worthless movie? PATHETIC. 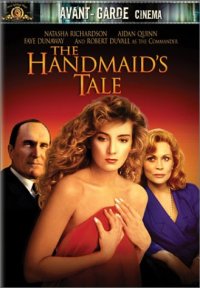