Special features: 10 deleted scenes; 3 never-before-seen alternate endings; Director commentary by Brett Ratner; Producer commentary.
Hugh Jackman, Halle Berry, Ian McKellen, Famke Janssen, Anna Paquin, Kelsey Grammer, Rebecca Romijn, James Marsden, Shawn Ashmore, Aaron Stanford, Vinnie Jones, Patrick Stewart, Ben Foster, Dania Ramirez, Elliot Page.
With the help of their new recruits, The Beast and Angel, the X-Men must face evolution itself in the form of their former teammate, Jean Grey. Possessed with the cosmic power of the Dark Phoenix, the resurrected Jean Grey has become a danger to herself, her mutant comrades, and the entire planet. A potential cure is discovered and processed to treat and ultimately eliminate the genetic mutations, once and for all. As the battle lines are drawn, the X-Men must contend with both Jean Grey's world-consuming powers, as well as the malevolent Brotherhood.
DVD, region 1, widescreen presentation; Dolby Digital.

Not as good submitted by Sonia on June 28, 2011, 4:59pm The third X-men movie isnt nearly as good as the first two. Im pretty sure they just made it so there would be another trilogy which seems to be popular in hollywood. 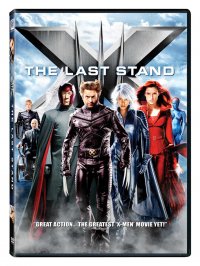