Videocassette release of the 1985 motion picture.
John Cusack, David Ogden Stiers, Diane Franklin, Kim Darby.
After his girlfriend ditches him for a boorish ski jock, Lane decides that suicide is the only answer. However, his increasingly inept attempts only bring him more agony and embarrassment. Filled with the wildest teen nightmares, a family you can't help but identify with, and a host of wonderful comic characters, Savage Steve Holland's writing/directorial debut is a masterful look at those painfully funny teen years.
DVD, Dolby digital English stereo; widescreen.

John Cusack is the king submitted by doctorfang on August 2, 2015, 6:36pm This is one of my favorite high-school comedies, thanks to clever writing and John Cusack. He delivers, in a big way. "Sorry I blew up your mom, Ricky."

Review? More like a testimony... submitted by Kikumatsu97 on August 5, 2015, 10:15am I've been watching this movie for the last 25 years. It's completely original in it's concept, and just totally divinely 80's.
The soundtrack is infallible. This movie blends awesome caricature drawing animation throughout, unique visuals, and hilarious irony.
I cannot wait to pass this down to my kids when they are old enough.
Not even a second of this movie is boring. It's a story about so many things blended together I just can't even say what this movie is about. I guess it's about Lane, finally understanding what it means to take the win, even if everyone around you thinks you're the most undeserving loser around. It's about finding your rank in life. I took a lot of lessons from this movie from watching it over the years, but most of all, I learned that I should just "go that way really fast, if something gets in your way, turn." 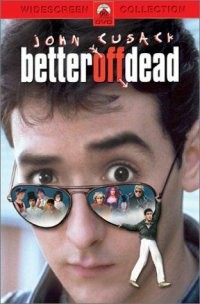