Originally published in single magazine form as I Kill Giants #1-7 by Image Comics.

A short, fantastic read. submitted by eknapp on December 17, 2012, 8:35am Barbara is a sharp, quick-witted ten year old girl (reminds me of a younger version of Emma Stone's character in Easy A) who plays Dungeons & Dragons and kills giants with a magic hammer named Coveleski. Or so she claims. In the meantime she deals with a vicious bully, a nosy school counselor, and the useless older sister who's raising her.

Wonderful from page one. The first scene is smart and funny. From there things become less amusing and more serious, more intense, but they never get less engaging. Barbara learns a few things about friendship and discovers that there is a lot more to a person beneath the surface. The revelation of her Big Secret is handled beautifully.

At first I thought the ending was a little too happy, a little too bright, but the whole point of I Kill Giants--that we're stronger than we think we are--required the ending it was given.


Stunning Graphic Novel submitted by Meginator on July 3, 2018, 7:26pm It took me a while to immerse myself in J.M. Ken Niimura’s artistic style, and thus the story, but it slowly drew me in and before I knew it I was closing the final pages, sobbing all the while (but in a good way). This is a powerful tale of grief and resilience, and a sharp illustration of the power of graphic narrative to subtly convey storytelling cues that words alone cannot. The resolution, in those final pages, is elegant and beautiful and heartbreaking and perfect, and the whole book is a stunning experience. 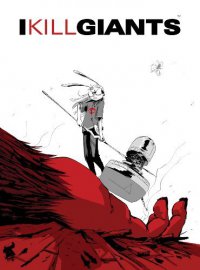