Very Funny submitted by Daniel Saltzman on January 10, 2010, 8:43am Stuffed to the brim with cliche and corresponding anti-cliche, Men in Tights is a hilarious parody of a classic European tale.

Hilarious submitted by andreahubert on June 27, 2012, 9:13pm This is a very fun movie to watch. Mel Brooks delivers more hilarity in this movie.

Meh submitted by crazypockets on July 24, 2013, 1:00pm Like most Mel Brooks movies, I thought it was funny when I was a kid, but now the humor just seems stupid. Oh well.

Funny & entertaining! submitted by Xris on August 28, 2018, 9:46pm I loved Cary Elwes in Princess Bride, so it was great to see him again in this! And Tracey Ullman is awesome in this! She looks great too!! This movie is so funny, and great at the end, when you find out who King Richard is!!!

Tight Tights submitted by caburr47 on August 4, 2019, 10:51pm My first encounter with Mel Brooks. This film is even funnier if you have seen other Robin Hood films. Good for adults and children.

This is the comedy for family night submitted by ccrose on August 31, 2019, 9:51pm Mel Brooks is at it again. The subtitle: Men in Tights.
Dave Chapelle at 18 gets a speaking part.
Yep, lots of fun. And a team song which you will not forget. 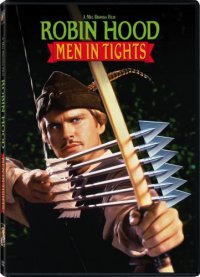