"Contains material originally published in magazine form as Thor : godstorm #1-3 and Thor #408-409."
Includes: Tales of asgard / writer, Tom DeFalco ; penciler, Mike Mignola ; inker, Bob Wiacek.
"It's a story for the ages when a sentient storm builds up a grudge against the god of thunder, attacking in both the age of Vikings and the age of heroes! A new enemy is empowered to battle Thor, but which old enemy is behind it all? Plus: the ominous Uroc, terror of trolls! Guest-starring the Avengers and the Warriors Three!"--P. [4] of jacket. 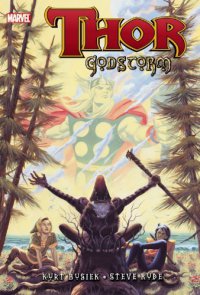