Finally, I Saw It submitted by DBJC on July 11, 2017, 8:14pm After hearing about the musical, I dived into the film after hearing all of the accolades. The 1988 film starring Winona Ryder, Christian Slater, and Shannen Doherty , is a dark comedy centered around an Ohio high school clique, headed by three girls with the same first name: Heather. Veronica is the newest and fourth member, who quickly becomes associated with sociopath, J.D. (Christian Slater). Heathers is the film that I didn't expect. It was dark with a pinch of absurdity, and series of events that made me gape at the fact that I didn't expect what I was seeing. Of the high school films that I saw, Heather is the forefront of the genre. This may be common knowledge but hey, at least I finally saw the film.

Good submitted by ckfinzel on August 8, 2018, 10:12pm There are definitely aspects of this film that don't hold up very well, but if you love a good dark comedy, you can't go wrong here.

Dark submitted by lstorc on August 28, 2018, 9:52am This is good for a dark comedic high school story. it's a little concerning given the application in modern times.

Dark, Dark Comedy submitted by Meginator on August 17, 2020, 10:17pm Content warning: This film contains references to and portrays bulimia (played for laughs), stalking, an abusive relationship, a suicide attempt, and a mass-casualty event at a school. It’s a dark comedy, but it is definitively *dark* and has aged unevenly in light of real-world events since its release.
I revisited this film with a mix of mixture of wry amusement and utter horror, and despite the incredibly dark content I think it holds up fairly well. Just when you expect the film to say something meaningful or take a particular turn, it tends to take the darkest twist possible, refusing to provide the type of feel-good resolution it so aptly derides. Winona Ryder and Christian Slater are perfectly cast, with Ryder relying on a straight-faced sarcastic approach to humorous and horrifying events and Slater effortlessly oozing creepiness with every word and gesture. Despite its bleak outlook on high school and the American teenage experience, the film is very funny and buries some deep truths in its over-the-top approach; it is in no way a standard teen film, but that isn’t necessarily a bad thing here. Some of its jokes and subject matter hasn’t aged particularly well, but Heathers remains compelling. 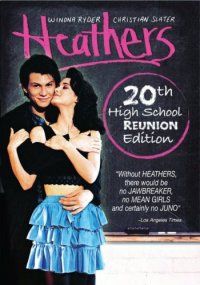