Excellent version submitted by cherylo on July 26, 2011, 9:52pm I liked this version far more than the nearly-contemporary Mel Gibson version. The cast is stellar.

saw it forever ago submitted by Kikumatsu97 on July 13, 2015, 10:46am i recently got this again and love it! Kenneth B's cast is enduring for good reason. It's an interesting wardrobe too, not realistic, which is cool artistically.

Well done! submitted by jessNU on August 11, 2019, 1:34pm A wonderful version of this classic play - my favorite Hamlet film

What an interesting cast assembled submitted by ccrose on August 29, 2019, 9:50pm I wonder what Branagh was looking for? He pulled together some odd choices that worked beautifully.

Good Writing submitted by SaraP on July 28, 2022, 7:33am Very well written. I think this Shakespeare guy has potential. 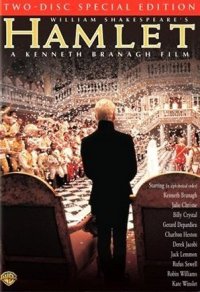