read together with Boxers submitted by camelsamba on July 6, 2014, 4:13pm Saints should be read in conjunction with Boxers. Together this pair of graphic novels dip into the history of the Boxer Rebellion, and are told from different perspectives. They both rely on magical realism. This one is written from the perspective of the Chinese Christians (who are called ‘secondary devils’ because of their affiliation with the ‘foreign devils’). Boxers gives the point of view of the native Chinese who fight to overcome the ruling dynasty and rid the country of foreigners (the Boxers). They are parallel in time and overlap in a few places in terms of plot points and characters. One of the most interesting aspects is how certain characters gain more depth once you read both books.

Universal insights from a conflict little known in the west submitted by FordAlpha on July 19, 2018, 11:09pm The companion to "Boxers", "Saints" relates the other side of the Boxer Rebellion, the perspective of Chinese Christian converts who were targeted by guerrilla fighters trying to expel foreigners from China. Together, the two books expose their readers to the subtleties of a conflict that most westerners know little about, and explore universal themes with some deep insights into what can motivate people to join different movements, fight, kill, and die for a cause. The parallel stories overlap, and should be read together to more fully understand the characters in both. I read "Boxers" first (which I think is what the author intended), and having already read "Boxers", I was really surprised by the ending of "Saints". 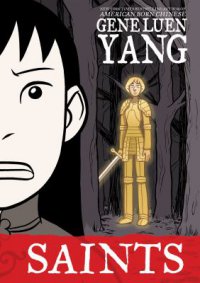