Based on the novel by Jane Austen.
Originally broadcast as a made-for-TV movie in 2007.
Sally Hawkins, Rupert Penry-Jones, Alice Krige, Julia Davis, Amanda Hale, Tobias Menzies, Peter Wight, Sam Hazeldine, Marion Bailey, Jennifer Higham, Anthony Stewart Head.
Anne Elliot fell deeply in love with handsome young naval officer Frederick Wentworth at the age of nineteen. But with neither fortune nor rank to recommend him, Anne was persuaded to break off her engagement. Eight years later, Anne has lived to regret her decision. She never stopped loving Wentworth, and when he returns from sea with rank and fortune, she can only watch as every eligible young woman in the district falls at his feet. Can Frederick forgive Anne for listening to her family instead of her heart?
DVD, region 1, widescreen (16:9 enhanced) presentation; Dolby Digital stereo., DVD9, NTSC.
Contents: Persuasion.

Disappointed submitted by fernzo on May 19, 2009, 3:30pm I have enjoyed both the leads in other performances, so I was excited to learn of this new production of the Austen gem, Persuasion. Sadly, there is no chemistry between the leads; I didn't find myself caring whether they came together. If you're an Austen fan and want a dose of Persuasion, choose the Root/Hinds production. The leads in that film were amazing and I give big points to Sophie Thompson as the hypochondriacal Elliot sister. THAT version is worth watching. Reserve it now.

Worth a try? submitted by Kikumatsu97 on August 21, 2015, 9:59am I think so. IThis m ovie feels like a short story version of Persuasion. But a decent one nonetheless. I like Sally Hawkins, I think she acts with good feeling.

Maybe a bit dry submitted by majean on August 8, 2018, 8:22pm I love this story, so I enjoy seeing it brought to the screen.

Average submitted by pamelawright on August 25, 2018, 11:05am It was nice to see the movie after reading the book. It wasn't as good as I hoped though.

Meh submitted by lstorc on August 30, 2018, 9:05pm This is probably not the best Jane Austen film adaptation. The pacing was unnecessarily drawn out and the character seemed flat.

Very disappointing adaptation submitted by valentina on November 21, 2021, 10:53pm Especially the actress playing the main character Anne - unattractive, needy, always poorly dressed and with open mouth. The last scene when she runs around the town trying to catch her future husband looks ridiculous - she literally runs around the town back and forth like a sportsman. I suspect athletic shoes on her in this scene. 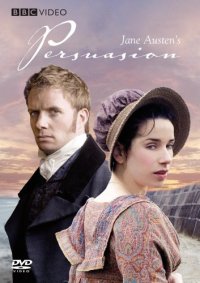