No Country for old men Based on the novel by Cormac McCarthy.
Originally produced as a motion picture in 2007.
Special features: "The making of No country for old men" featurette; Working with the Coens: reflections of cast & crew" featurette; "Diary of a country sheriff" featurette.
Tommy Lee Jones, Javier Bardem, Josh Brolin, Woody Harrelson, Kelly Macdonald.
Llewelyn Moss is a Vietnam vet who could use a break. One morning while hunting antelope, he spies several trucks surrounded by dead bodies. He decides to examine the site. He finds a case filled with $2 million and a truck loaded with heroin. Moss takes it with him, tells his wife he's going away for awhile, and hits the road until he can determine his next move. On his the way from El Paso to the Mexican border, he discovers he's being followed by ex-special ops agent Chigurh. Chigurh's weapon of choice is a cattle gun, and he uses it on everyone who gets in his way. Just as Sheriff Bell, a World War II vet, is on Moss's trail, Chigurh's former colleague, Wells, is on his.
DVD, NTSC; region 1, widescreen (2.35:1, enhanced) presentation; Dolby Digital 5.1 surround, digitally mastered.
Contents: No country for old men.

Best movie ever! submitted by sumsaylor on July 17, 2022, 12:35pm Do yourself a favor, Friend-o, and rent this movie. No better movie than this in the past 20 years, if you ask me. Javier Bardem is chilling as the main antagonist and sports one of the more disconcerting haircuts to be encountered in a feature film, a thick lustrous pageboy trimmed by the devil's hairstylist no doubt. Every scene is good in this movie. Every one. How is that possible? I don't know, but it is. A thrill ride from the beginning, a dark and at times darkly comic look at the encroaching dangers of our time, set in the 1980s, so as bad as it was then, it has gotten somehow worse now. Great performances by all involved, but Tommy Lee Jones is at his wise old country-fried best. The final scene is a stunner. Hats off to the Coen brothers. 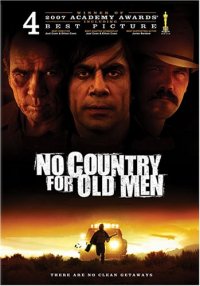