Austen done well submitted by katkrazygrrl on August 8, 2011, 11:54am Another enjoyable iteration of a beloved Austen novel. The insights into production, choice of actors and script creation in the Interview featurette added greatly to my appreciation of this "edtion" of Sense and sensibility.

Excellent BBC Series submitted by ks1287 on July 6, 2013, 9:22pm I'm a big fan of BBC series, especially the original Pride & Prejudice. This was another excellent adaptation of Austen by the BBC. I also enjoyed the biopic of Miss Austen Regrets that was included with Sense & Sensibility.

Great adaptation submitted by crazypockets on July 10, 2013, 6:28pm I think I liked this version more than the one with Emma Thompson. The sets were very well done, and the scenery was heavily featured which I really liked. A lot of Austen adaptations take place mostly indoors, but this one had a lot of outside shots and almost made the countryside its own character. I liked the casting a lot, too. Though now after watching "Downton Abbey," it's hard to accept Dan Stevens as anything but Matthew Crawley....

Pretty good... submitted by Kikumatsu97 on June 12, 2015, 9:10am I think the video quality is the best aspect of this newer version. The film locations are in remarkable clarity and show the beautiful landscape of the countryside. It's cast a bit more realistically than the Ang Lee version, especially considering Eleanor's age. (compared to Emma Thompson) The acting is fine and it's not a total waste of time. But if you're new to this Jane Austen story and want the best your library can afford go for the 1995 version. 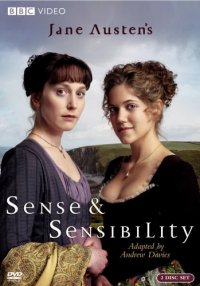