"Nimona is an impulsive young shapeshifter with a knack for villainy. Lord Ballister Blackheart is a villain with a vendetta. As sidekick and supervillain, Nimona and Lord Blackheart are about to wreak some serious havoc. Their mission: prove to the kingdom that Sir Ambrosius Goldenloin and his buddies at the Institution of Law Enforcement and Heroics aren't the heroes everyone thinks they are. But as small acts of mischief escalate into a vicious battle, Lord Blackheart realizes that Nimona's powers are as murky and mysterious as her past. And her unpredictable wild side might be more dangerous than he is willing to admit" -- provided by publisher.

Fantasy Fun submitted by sdunav on July 9, 2015, 11:02am Although the artwork wasn't totally to my taste, it grew on me. And the plot, the characters, and the tongue-in-cheek jokes were awesome. I think Ballister Blackheart is my favorite anti-hero since Dr. Horrible. His nemesis, Ambrosius Goldenloin, is also pretty cool.

Something Different submitted by sushai on August 9, 2017, 8:54pm I'm really enjoying going through NPR's list of most recommended graphic novels. This one stands out, probably not for what most people would think. I think the character of the "nemesis," Ballaster Blackheart, steals the show from Nimona. There is something admirable and endearing about his character, especially as he is trying to shape his young sidekick into a less-impulsive person.

Fun and Interesting submitted by dntanzer on August 12, 2018, 2:49pm This was an enjoyable book. The writing, storyline, and art were all fun and interesting. I thought characters were well-written and enjoyed learning more about them. The actual ~reveal~ at the end of the book was not something I saw coming, which I really appreciated!

A nearly perfect graphic novel submitted by Vega on August 29, 2019, 10:48pm A friend recommended this book to me, and I admit, I was a little sceptical at first because it was a web comic. None of the web comics I'd read years ago had been of good quality in terms of either art or story, so I was naturally pretty surprised upon even seeing the cover of Nimona. And then I sat down and read it in one go, and it was really, really good. The characters were so well-written that I could hear their voices, and the use of colour is both appealing and meaningful. There is some ambiguity left at various points throughout the story, but rather than making it feel incomplete, it allows the reader to make their own conclusions. The pacing was slightly slow at the beginning but otherwise very good and appropriate to the storyline.

Delightful submitted by Princess Cimorene on July 22, 2020, 12:48am I fell in love with this story on the first page. The illustrations and use of humor are so perfect. The plot is engaging, but the relationships between the characters are the real highlight of this graphic novel.

My personal review of NIMONA submitted by Margaret on July 31, 2020, 9:24pm Let’s talk about Noelle Stevenson who’s probably one of the most creative female authors to come into popular media in the last five years. Many of you are familiar with her very popular Netflix adaptation remake of “She-Ra and the princesses of power”. She Ra is a series I would like to go into another time but first let’s talk about one of her first projects being of “NIMONA”. “Nimona” was a web comic that made its premiere in 2012 and eventually was adapted into a graphic novel in 2015. Today I will be listing the reasons on why this book is worth a read.

1. The genres/elements: Nimona is a mix of every different genres that you probably do not see in a lot of comic books. There is comedy, lighthearted moments and a little bit of thriller mixed in between with some sci-fi and fantasy. The author didn’t just randomly threw a lot of stuff in she gave it all reason and was very creative with it.

2. The Story: to some of you who are not familiar with the story of Nimona, it follows the adventures of supervillain mad scientist Ballister Blackheart, An ex-Knight who just wants to make a name for himself after he was tragically injured by a former comrade back when he was young. He takes on a sidekick, a young shapeshifter named Nimona. The rest of the series follows His relationship with Nimona and his arch-Nemesis, Sir Ambrosius Goldenloin, a knight who works for the Institution of Law Enforcement and Heroics, an agency that wants to shut down Blackheart’s operations. We also learn more about Blackheart’s past and Nimona’s origin of her shape shifting abilities. I don’t want to spoil it for you but you need to figure out what happens in the story.

3. The characters: The characters are very well written and uniquely drawn. Blackheart is a very sympathetic villain, there are times he doesn’t want to resort to killing anyone when he commits his crimes,   where as Nimona doesn’t have a problem with it which alarms him greatly and makes him question taking her on as a sidekick  . Nimona is a very broken character, she may be happy go lucky and a tough as nails young woman but her origin story is very tragic and it explains why she has a hard time trusting people including her “boss” at times. Sir Goldenloin first comes off as kind of an annoying arch nemesis but as the story goes on he understands what’s going on and he wants nothing more than to save his former friend, Blackheart (PS there’s a very complicated history between these two.) I can’t go into any more about the three main characters without spoiling anything. But the characters are likable and they’re very well done.

4. The artwork: The backgrounds are very colorful and easy on the eyes. The way the people are drawn is very fascinating, it’s not like anything I’ve seen, except in the Lumberjanes series (yes in case you’re wondering it’s  same author) and to those who do not care for Nimona’s partially shaved head, they explain later why, I believe it’s part of the story.

5. The ending: Again I won’t spoil it for you but they left it open for a sequel if necessary. It was a good way to conclude the story. There is an epilogue that explains a few things.

6. Other Media: there is an audiobook adaptation with some very interesting voice actors to play the characters it is unabridged over two hours long and he’s probably available online. There are talks of a Nimona movie coming out January of 2022 and will be produced by none other than blue sky Studios. My only hope that the film will stay faithful to the original source material.

Conclusion: in the end, is Nimona worth a read? The short answer is yes. I do recommend this for kids probably 13 and up it is not a little kid story but will work for Young adults due to some violent nature and a few other elements that may be unsuitable for younger children. With a film coming out in 2020, it would be best to read this first if you want to get a good idea of what it’s all about. It’s also a good way to get to know the work of Noelle Stevenson before you watch the Netflix series She Ra and the Princesses of Power. She’s a wonderful author and has quite a lovely imagination. Check out Nimona, you’ll be in for quite a treat. 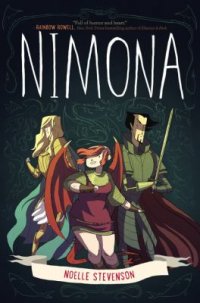