beautiful and offbeat submitted by amy on July 5, 2014, 5:43am Another beautiful and slightly offbeat film by the great duo, Michael Powell and Emeric Pressburger, that takes its time to unfold, with lush black and white cinematography, a pastoral landscape, a sometimes haunting soundtrack, and a script that is first one type of film, then another - a whodonut, a war film, a rustic adventure. Slowly the plot twists and turns into a singularly lyrical journey of four 1944-era pilgrims who, like Chaucer's pilgrims hundreds of years earlier, are ultimately wending their way toward the blessings or atonement that await them in Canterbury. 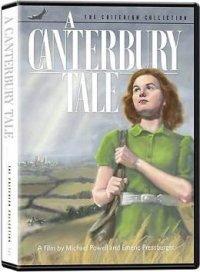 LANGUAGE OPTIONS
In English with optional English subtitles for the deaf and hard of hearing.