Based on LEGO Construction toys.
Originally released as a motion picture in 2014.
Container lists subtitles as English, French & Spanish, with English SDH.
Voices: Chris Pratt, Will Ferrell, Will Arnett, Elizabeth Banks, Nick Offerman, Alison Brie, Charlie Day, Liam Neeson, Morgan Freeman.
Emmet, an ordinary, rules-following, perfectly average LEGO minifigure is mistakenly identified as the most extraordinary person and the key to saving the world. He is drafted into a fellowship of strangers on an epic quest to stop an evil tyrant, a journey for which Emmet is hopelessly and hilariously underprepared.
DVD, region 1, dual-layer format, widescreen presentation; Dolby Digital 5.1 surround.

Funny hero and heroine submitted by KSB2013 on June 17, 2014, 8:59pm Funny movie for all lego lovers. Great content and movement of the plot. it is a must have movie for home.

Great for everyone submitted by mbleed on June 19, 2014, 8:43am Kids and adults alike will find this movie hilarious, fun, and meaningful.

Surprisingly awesome! submitted by monipate on June 25, 2014, 8:46pm The animation is AMAZING. Found the story a little awkward, especially at the end, but the comedy is so worth it!

Great submitted by meghef on June 29, 2014, 12:27pm A hilarious and fun adventure that is entertaining for all ages.

The Lego Movie submitted by mk31 on July 5, 2014, 10:16am The Lego Movie is one of the best animated movies I've ever seen! The animation is awesome, all of the voices are great, and the script is hilarious. Recommend for all ages.

Expectations exceeded submitted by Drake Emmitt on July 11, 2014, 10:11pm I didn't think this movie would be that funny seeing as it's about Legos but I find myself repeating everything from the couch to the songs!

creative submitted by yojasor on July 14, 2014, 9:01am I was amazed by all the lego creations in this movie. It was very interesting. The story isn't the most interesting, but parts are still funny.

Everything is Awesome! submitted by mtrax on July 28, 2014, 9:06pm My nephew (a second grader) brought this movie over. We all enjoyed it. I particularly enjoyed all the pop culture references. The song will get stuck in your head though.

Great for Parents and Kids alike submitted by pk on August 3, 2014, 4:22pm My expectations for this movie were mixed - seemed like a grab by LEGO corp to cash in, but the reviews were good. After seeing it - I was glad we all watched. There are a lot of pop/culture references for the adults, humor, action for the kids, cool ideas about when it's OK to be an individual and when a team effort is best, and some sentiment that appeals to both. While it isn't the best movie ever, it's worth a look and a great evening for the whole family. Teens, kids, adults - we all liked it!

Good submitted by cinderellariley on August 12, 2014, 9:07am Everything is Awesome.

Highly recommended submitted by kikipeacelove on August 18, 2014, 3:37pm I've watched it about twice now and I love it!!!

Fun submitted by beeniepie on August 27, 2014, 7:22pm This is a fun film. I've never ventured into the lego universe outside of playing with legos, so I'm not sure how this stacks up against the video games and animated movies. It was a little too action-packed for my 3 year old, but I think he'll enjoy it in a few more years. I thought it had a great lesson about conformity, and the beauty in fun/creativity vs perfection.

Who doesn't love this?!?! submitted by Todayspresent on August 8, 2015, 2:57pm This movie was amazing. Seriously, I can't think of anyone nor anyway it wouldn't be loved! This is a must see!!!

Legos Unite-temporarily submitted by tbbrown76 on August 21, 2015, 1:16pm Nice fun movie for adults and kids alike. I checked this one out during the Summer Game Lego Extravaganza. My favorite character was Emmett.

It is awesome! submitted by crankycrack on June 23, 2016, 9:01pm When you hear that there is a movie called The Lego Movie coming out your reaction was probably piqued but uncertain. Well let's alleviate that; just like the toy itself this movie is entertaining, enjoyable and exciting. The movie is like the toys come to life. If you liked legos in any way then you will probably like this movie. We like it. I hope that you like it too when you watch it.

Good submitted by mvandermark on June 30, 2016, 4:42pm It was a cool movie and the animamation was good. Recomended to kids 12 or less years old. But overall, the plot was interesting and was a typical lego story. Highly recomended! It gets kindof boring after a while though.

Hilarious submitted by hudsonslife on July 8, 2016, 3:17pm I couldn't stop laughing with all the puns and jokes. I love LEGO and seeing the animation in the movie was so cool. Everything was definitely awesome!

Great movie submitted by caidala on July 10, 2016, 2:04pm This movie is a parody of prophecy and action movies and has many good jokes and puns.

Refreshing submitted by toschag on August 3, 2016, 11:00pm A great break from current animated movies. The LEGO visuals are creative and wonderful to watch, and the film has a great message.

Everything is awesome!!!! submitted by Claireywang on August 14, 2016, 8:12pm Love the song every thing is awesome !!!! It's an awesome and inspiring movie.

So cute! submitted by bookworms on August 31, 2016, 8:53pm Great little movie! Helps kids to learn to be your own creative and unique self and helps them to learn teamwork. Even a little fun for adults!

I liked it submitted by Annarborkaren on June 30, 2017, 5:16pm I liked the part where Emmett builds the double decker couch. It was funny and wierd. And it was wierd when the Millenium Falcon came. It was crazy.

A Fun Tie-In submitted by Meginator on July 21, 2017, 7:42pm Despite being a movie ostensibly about imagination that instead encourages you to purchase pre-made playsets, The Lego Movue is fairly fun. The voice acting is over-the-top in a way that doesn't detract from the story, and the whole thing is reasonably tongue in cheek. The standout musical number is deceptively catchy and the metafictional elements, though occasionally a bit blunt, actually add to the story. The message can be a bit overwrought at times, but for a film that amounts to an extended advertisement The Lego Movie has a ton of charm and is a lot of fun.

My eyyyyyessss submitted by KOH on August 3, 2017, 4:54pm I felt like I was being optically assaulted the whole time, but if you can set that aside, this is a pretty entertaining, enjoyable film!

I like uni kitys home submitted by kpkozloff on July 29, 2018, 3:27pm Its so cute ! I like Uni kitty! I like how she turns relly happy to relly mad

And the theme song.

The Lego Movie submitted by lstorc on July 5, 2019, 10:01pm The Lego Movie is an entertaining movie for all ages! The characters have depth. There is a plot and a mega plot. It's creative and enterprising.

Everything is Awesome submitted by katiekipp on July 2, 2020, 7:45pm The animation is really great!

Everything is awesome submitted by maureenannarbor on July 18, 2020, 2:05pm I loved this movie. I felt like I was in the movie.

The Lego Movie submitted by maywang on June 11, 2021, 8:41pm EVERYTHING IS AWESOME, including this movie!

Awesome submitted by ianmcpherson on August 9, 2021, 7:16pm Yes, everything is awesome! 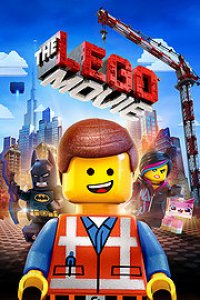