"Jude was seven years old when her parents were murdered and she and her two sisters were stolen away to live in the treacherous High Court of Faerie. Ten years later, Jude wants to belong there, despite her mortality. But many of the fey despise humans. Especially Prince Cardan, the youngest and wickedest son of the High King. To win a place at the Court, she must defy him--and face the consequences. In doing so, she becomes embroiled in palace intrigues and deceptions, discovering her own capacity for bloodshed. As civil war threatens, Jude will need to risk her life in a dangerous alliance to save her sisters, and Faerie itself."-- Amazon.com.

Decent teen read submitted by rbranstrom on June 20, 2018, 6:54am I like Holly Black's other books, and this one is pretty good too- the basic premise is that the world of Fairy (changlings, under the hill revels, etc) is real, and the main character and her sisters have been raised there. The story seems a bit jerky, trying to fit in a lot of plot points in a short amount of time, but the world Holly Black has created out of myths is great.

NEW FAVORITE HOLLY BLACK BOOK submitted by lcbuday on August 19, 2018, 1:36pm <i>Am I like this because he killed my parents? Or because he was my parent?</i>

Jude's whole life is an identity crisis. As the illegitimate daughter of a Faerie lord's runaway human wife, she is an outcast in the wicked, glittering world of Elfhame's gentry. But nor does she feel at home in the mortal world, however much her older half-sister Vivienne wants her to remember her human heritage. But then again, it's hardly surprising that Jude should be confused about her family and allegiances-- she's been raised since the age of seven by General Madoc, her mother's first husband, who brutally murdered both of her parents in cold blood, but who loves her and her sisters fiercely in his own odd way. When Jude's desperate desire to really belong in the Faerie world leads her to accept a mortally dangerous job spying for Crown Prince Dain, her immersion in Faerie politics complicates her already-complicated existence. At the end of the day, how far is Jude willing to go to protect both her own interests and her beloved, brutal home?

Holly Black achieved deity status in the world of faerie literature many years ago, so it's hardly surprising that <i>The Cruel Prince</i> is a dazzling addition to the genre. What's surprising is that I <i>could be surprised </i> by the quality of a Holly Black novel-- I didn't think it could get any better than the faerie books of hers I'd read before. But this book is in a league of its own, outstripping even my adoration for Sarah J. Maas's <i>Court of Thorns and Roses</i> series. Jude is a dynamic protagonist who manages to mire herself in gray morality without quite crossing over into antiheroine territory, and I found myself deeply invested in her relationship with her adoptive father, Madoc. The natural feelings of disgust that rise in the reader upon discovering Jude's love for her parents' murderer are mirrored in Jude herself: she knows that on some level, it's beyond wrong for her to care for Madoc as she does. But on the other hand, this is the man who raised her, so the situation simply cannot be black and white. Another interesting thread that runs throughout the novel is the question of who, exactly, is the titular "cruel prince." At first it seems fairly straightforward: it's Cardan, the youngest prince, who torments Jude and her twin sister Taryn on a daily basis. But then there are Cardan's brothers: Dain, Jude's boss, who is revealed to be more power-hungry than she predicted, and Balekin, who abuses Cardan. In the end, it seems as though "the cruel prince" is more of an idea than a character, is indicative of the vicious games one must play to gain and keep power in the faerie courts. "We'll be as fair as any Prince of Faerie," Jude says towards the end of the book, when she and her allies are preparing for a mission. And, although the pages that follow are blood-soaked and full of treachery... she is.


A Darker Fairy Fantasy submitted by dntanzer on August 28, 2018, 9:17am I really enjoyed this book. It creates a fairy world adjacent to ours that's a bit dark and twisted. The fae in this book cannot lie and are ruthless, especially towards humans like our protagonist Jude. I thought the characters were all interesting and it was easy to understand and root for Jude.

AMAZING submitted by caherne on July 5, 2020, 11:39am This book has been in my TBR for so long and it did not disappoint. I definitely recommend.

So good submitted by laursanc6 on June 24, 2021, 8:22pm Read the whole series in a day. I love Jude so much. The political intrigue is on point. That's all 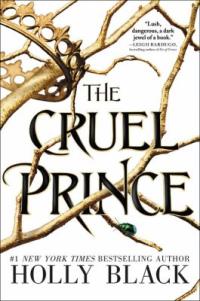