What the Eyes Don't see : : a Story of Crisis, Resistance, and Hope in an American City How I got my name -- What the eyes don't see -- The barbecue -- The valedictorian -- Haji -- Red flags -- First encounter -- Miasma -- No response -- Sit down -- Jenny + the data -- Public health enemy #1 -- What field are you on? -- The man in the panda tie -- Environmental injustice -- Poisoned by policy -- Shortwave radio crackling -- Meeting the Mayor -- Aeb -- The press conference -- Splice and dice -- Numbers war -- Demonstration of proof -- All the things we found out later -- Fire ant -- Truth and reconciliation -- Prescription for hope -- Haji and the birds.
"The dramatic story of the signature environmental disaster of our time and an inspiring tale of scientific resistance by a relentless physician who stood up to power. Flint was already a troubled city in 2014 when the state of Michigan--in the name of austerity--shifted the source of its water supply from Lake Huron to the Flint River. Soon after, citizens began complaining about the water that flowed from their taps--but officials rebuffed them, insisting that the water was fine. Dr. Mona Hanna-Attisha, a pediatrician at the city's public hospital, took state officials at their word and encouraged the parents and children in her care to continue drinking the water--after all, it was American tap water, blessed with the state's seal of approval. But a conversation at a cookout with an old friend, leaked documents from a rogue environmental inspector, and the activism of a concerned mother raised red flags about lead--a neurotoxin whose irreversible effects fall most heavily on children. Even as circumstantial evidence mounted and protests grew, Dr. Mona knew that the only thing that could stop the lead poisoning was undeniable proof--and that to get it, she'd have to enter the fight of her life. What the Eyes Don't See is the inspiring story of how Dr. Mona--accompanied by an idiosyncratic team of researchers, parents, friends, and community leaders--proved that Flint's kids were exposed to lead and then fought her own government and a brutal backlash to expose that truth to the world. Paced like a scientific thriller, this book shows how misguided austerity policies, the withdrawal of democratic government, and callous bureaucratic indifference placed an entire city at risk. And at the center of the story is Dr. Mona herself--an immigrant, doctor, scientist, and mother whose family's activist roots inspired her pursuit of justice. What the Eyes Don't See is a riveting, beautifully rendered account of a shameful disaster that became a tale of hope, the story of a city on the ropes that came together to fight for justice, self-determination, and the right to build a better world for their--and all of our--children."--Dust jacket.

A Must-Read submitted by sushai on June 30, 2019, 7:28am I devoured this book. It's well-written and accessible enough that it's easy to do that, but it also contains a lot that's hard to take, especially about people who will put their politics or career before doing the right thing, even when people's lives are at risk. What I most appreciate is Dr. Hanna-Attisha's own story of coming from Baghdad with her family of progressive activists, and how she shows it just takes one person (she had help, of course, but she was the driving force) to make remarkable change. She is also fair-handed when ascribing blame, so the book feels more like getting to the truth rather than getting at anyone.
Highly recommended.

compelling memoir submitted by camelsamba on August 30, 2019, 10:02pm If you live in Michigan and even halfway pay attention to the news, you know the broad outlines of this story. But what you might not know is all the details behind the scenes, or why and how certain individuals were compelled to take action.

Hanna-Attisha's story is a memoir, narrative driven and highly engaging as a result. Some reviewers don't like how she weaves in tales of her ancestors, but their history of activism strongly influenced her choice of career and her outlook on life. As such, it is an important piece of her approach to the world, including her doggedness in getting the state to acknowledge and act on the harm being done to Flint's children. It is a nice complement to <<The Poisoned City: Flint's Water and the American Urban Tragedy>> by Anna Clark. (Clark is a journalist so her book is well-researched and scholarly, but also dry at times in comparison to Hanna-Attisha's.)


Flint Water Crisis and the government's complicity submitted by tbbrown76 on June 20, 2020, 9:38pm Dr. Mona just wants to be a good doctor. But, she is caught in the middle of her patients and the State when it seems Flint water isn't safe. A well written, interesting and important book. Highly, highly recommended.
TB

Must read for Michiganders submitted by emileeione on August 29, 2020, 7:50pm The history of the Flint Water Crisis is important reading for any Michigander. Dr. Mona Hanna-Attisha gives her first hand experience woven with her personal story. Very powerful.

The Flint Water Crisis from the inside submitted by flemingj on June 26, 2021, 9:40am Just stunning! From the very beginning Dr. Mona was sounding the alarms, but was consistantly blocked by officials. I'm so grateful the children of Flint had her fight for them.

fantastic submitted by gknitter on July 16, 2021, 1:30pm Dr. Mona uses her excellent story telling abilities to intertwine the development of the Flint crisis with her family's history and other public health crises. Her first hand experience is engaging and educational.

Intriguing and inspiring submitted by annabanana11 on July 3, 2022, 4:47pm Dr. Mona is a great story-teller and brings the facts and a highly scientific and public health view to this important issue. It's a must-read for Michigan residents to understand this horrible crisis. 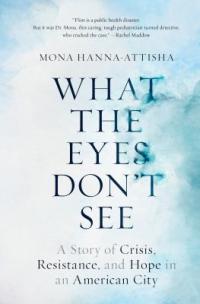