1619 : : Jamestown and the Forging of American Democracy Jamestown -- The great reforms -- First Africans -- Commonwealth -- Tumult and liberty -- Inequality and freedom.
"1619 offers a new interpretation of the significance of Jamestown in the long trajectory of American history. Jamestown, the cradle of American democracy, also saw the birth of our nation's greatest challenge: the corrosive legacy of slavery and racism that have deepened and entrenched stark inequalities in our society. After running Jamestown under martial law from 1610-1616, the Virginia Company turned toward representative government in an effort to provide settlers with more control over their own affairs and more incentive to invest further in the colony. In late July 1619, the newly-formed General Assembly gathered to introduce "just Laws for the happy guiding and governing of the people." It was the first legislature in America, and history has cast it as the foundation of American freedom and democracy. From that moment on, propertied white colonists became accustomed to freedoms that would have been unthinkable in England. But those very freedoms also permitted the wholesale and largely unchecked exploitation of poor white laborers and non-European peoples. More than nine-tenths of all those arriving in Virginia at this time were brought in some form of servitude or labor contract. This is a pattern we recognize all too well in modern American society-opportunities are not shared, inequality is rampant, racism is systemic. We would like to think these are problems that can be solved by expanding representative democracy; Jamestown teaches us, instead, that these are problems have long been created and encouraged by American democracy. Casting a skeptical eye on deeply-cherished myths, 1619 will be essential reading for anyone struggling to understand the paradox of American freedom."--Provided by publisher. 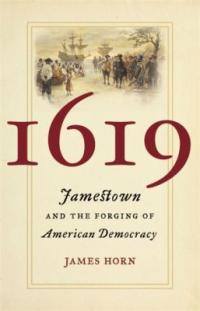