"Originally published in hardcover in the United Kingdom by Faber & Faber, London, in 2018"--Title page verso
"At school Connell and Marianne pretend not to know each other. He's popular and well-adjusted, star of the school football team, while she is lonely, proud, and intensely private. But when Connell comes to pick his mother up from her job at Marianne's house, a strange and indelible connection grows between the two teenagers--one they are determined to conceal. A year later, they're both studying at Trinity College in Dublin. Marianne has found her feet in a new social world while Connell hangs at the sidelines, shy and uncertain. Throughout their years at university, Marianne and Connell circle one another, straying toward other people and possibilities but always magnetically, irresistibly drawn back together. And as she veers into self-destruction and he begins to search for meaning elsewhere, each must confront how far they are willing to go to save the other" -- Amazon.com

Not the best submitted by lostoria on August 4, 2019, 1:37pm I came in with high expectations, considering how much I'd heard about the book. However, once I started, my longing for this book to be good slowly started to diminish. The main characters were hard to empathize with since it felt like they didn't have much of a personality. Some of the actions of the characters didn't make sense. These two factors made it hard to read the book, considering that the book is very heavily character-focused rather than plot-driven. When I finished, I was heartily disappointed with how much the characters didn't learn/grow despite going through an entire college career. Not my favorite.

Normal People submitted by srussel on June 29, 2020, 7:32pm I also came in with super high expectations. The beginning and middle were very good, but the end was not satisfactory or all that conclusive.

Dissapointed submitted by jhappach on March 11, 2021, 12:45pm I came into this book with high expectations, but was disappointed-like many other readers from other reviews (Audible, Libby ect.) The characters were difficult to empathize with and honestly dull. There wasn't much of a plot, I sat there wondering if any action would actually happen to the characters or if they would mature enough to have an actual conversation. I feel like the main conflicts (if you can even call them that) in the book could have been solved if the two main characters had a genuine conversation. I finished this book mostly out of spite hoping that it would get better, and when I finished I thought that maybe I just wasn't smart enough to "get it". But after hearing from others it just was a boring book.

Great Character Study submitted by 17661 on June 15, 2022, 11:42am I listened to this on audiobook and, honestly, I think it might have saved this book for me. The speaker had this really lovely Irish accent- if you like audiobooks, I definitely recommend checking it out. I, overall, really enjoyed this book. As others have said, it's more of a character study than a plot-driven book. But I actually really appreciated the characters, the dialogue on kind of the banality of day-to-day existence and how "normal people" can be so fickle, but when you find that someone who just gets you, you should hold on to them. Connall, especially, I really related to. His POV had some GREAT one-liners. In sum, I found this book to be very honest, which I really appreciated. However, I also felt disappointed that there wasn't much of a conclusion at the end of the book. I wish we had gotten some kind of closure- some glimpse into the future for these characters who we've invested so much time in.

Not impressed submitted by wilcomea on July 20, 2022, 12:38am Found the story slow and always lacking something

Over-hyped submitted by zixyxuan on August 8, 2022, 12:11pm This book was better than Beautiful World, Where are You, but still not great. I don't think I will be reading any more books by Sally Rooney - mainly because I don't enjoy the writing style. And given all of the hype around this book, I honestly expected a lot more from the story. I was really invested in Marianne and Connell's relationship in the beginning and was curious how Rooney was playing on the social class dynamic, but then zoned out for the last third of the book. I think the main issue was that I couldn't relate to the main characters because they had no depth and what feels like zero development over the course of the novel. Rooney writes them in a way that feels very artificial - like, we are told over and over again that Marianne and Connell are special, but as the title implies, they are normal people trying to live normal lives. Depending on your reading style, I would also recommend listening to this novel as an audiobook. When I initially tried to read it, I was really confused by the lack of quotation marks that indicate characters were talking.

At this point, I'm wondering if it would be worth my time to watch the mini-series.


Really enjoyed it submitted by ctconley on August 12, 2022, 11:47am If you read all of Sally Rooney's work, you can see certain threads that become apparent throughout her work. Curious insights into the literary world of Sally rooney.

Great submitted by courtneyhooper on August 12, 2022, 11:08pm I don’t think people know what to expect with all the hype for Rooney. She does something really unique. She writes about the minutiae that all amounts to the big stuff, the little bits that make us who we are. 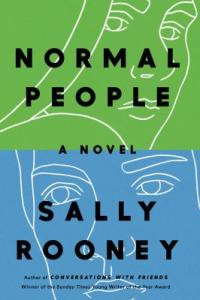