They Called us Enemy "A stunning graphic memoir recounting actor/author/activist George Takei's childhood imprisoned within American concentration camps during World War II. Experience the forces that shaped an American icon -- and America itself -- in this gripping tale of courage, country, loyalty, and love. George Takei has captured hearts and minds worldwide with his captivating stage presence and outspoken commitment to equal rights. But long before he braved new frontiers in Star Trek, he woke up as a four-year-old boy to find his own birth country at war with his father's -- and their entire family forced from their home into an uncertain future. In 1942, at the order of President Franklin D. Roosevelt, every person of Japanese descent on the west coast was rounded up and shipped to one of ten 'relocation centers', hundreds or thousands of miles from home, where they would be held for years under armed guard. They Called Us Enemy is Takei's firsthand account of those years behind barbed wire, the joys and terrors of growing up under legalized racism, his mother's hard choices, his father's faith in democracy, and the way those experiences planted the seeds for his astonishing future. What is American? Who gets to decide? When the world is against you, what can one person do?"--Provided by publisher.

Powerful submitted by rmhawkins on July 30, 2020, 9:55am George Takei's family story is beautifully told here during the Japanese internment camps. I would also recommend seeing the recorded version of the play Allegiance (also written by George), if you are interested in this time period.

A Must-Read submitted by samanthar on August 19, 2020, 11:32am Winner of the Eisner 2020 Best Reality Based Work, They Called Us Enemy is a powerful graphic novel documenting actor, author, and activist George Takei’s youth spent in US Japanese internment camps during WWII. In 1942, George and his father, mother, little brother, and baby sister were forced out of their Los Angeles home and imprisoned in US military camps. This was done to about 120,000 people, on the singular basis of being of Japanese descent. I knew about the internment camps and discrimination against Japanese Americans that took place at the time, but Takei’s telling brings out the nuances of what life was like for a child living through this devastating time. It is shocking to think that this happened in America, and less than 80 years ago. It hits home how this could happen again all too easily. I enjoyed the story being told in a graphic novel format. It helped keep it from getting pulled down by the heaviness of the subject, and I found myself more readily engaged by a graphic novel than if this was a traditional nonfiction book. I think it’s important for everyone to know about this deplorable time in United States history, and George Takei’s book is an excellent way to learn about it.

Maybe later submitted by andreayun on April 24, 2021, 1:16pm My daughter is almost 7, and I thought this would be a bit intense for her. She loves it, though. It will be a good spark for conversations about how Asians have and haven't been accepted into America.

Awesome book :) submitted by Mila Hunsinger on May 28, 2021, 8:57am I read this book over and over again, before reading it, I didn't know that there were concentration camps in America. It taught me a whole new perspective.

A graphic memoir for all ages submitted by sarah fishburn on June 20, 2021, 2:49am I was mesmerized by Mr. Takei’s heartrending story of his family’s time in a Japanese internment camp - not exactly a concentration camp, but a shameful example of what even a country with noble ideals can do when led by racism. Yet his wry sense of small moments of humor made his story some what bearable. Two or three of my grandkids, in our same household, aged 8-11, also picked it up and read it through with interest. Good topics for discussion for sure.

Great info submitted by Xris on July 7, 2021, 12:25am Now I need to find that Ted Talk that he did in Kyoto and watch it. I've read up on him and his incarceration, but still am learning new things! Great artwork, too! I'll recommend it to my students!!

They Called Us Enemy submitted by SBNB on July 8, 2021, 5:40pm Excellent book! I'm definitely going to share it with my kids later.

Deserves its Accolades submitted by caburr47 on July 17, 2021, 9:26pm What a smart storytelling device to introduce a broader audience to the terrible history of the Japanese internment. I highly recommend this.


Important story, with an ending focused on democracy submitted by Susan4Pax -prev. sueij- on June 18, 2022, 11:09pm Takei and his team have made an accessible, historical, and powerful story that teaches, honors, and enlightens. I love that his telling of the Japanese internment camps reflects his childhood recollection, which honors that his parents (his mother especially) made it as safe, home-like, and adventuresome as possible. He lived it in the safety of a family through the eyes of a child, and we see that. He also makes clear that it was unjust, and wrong. He tells the broken history of the actions of the United States government (policies and people), as well as the acknowledgment of that brokenness and reparation later. It’s an honest story, appropriate for young people, a good primer/ reminder for older readers, and with an eventual focus on the power of democracy. An excellent graphic novel, and it makes great use of the medium. 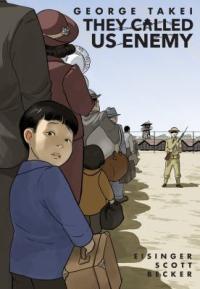