Based on the novel written by Maria Semple.
Originally released as a motion picture in 2019.
Wide screen.
Judy Greer, Cate Blanchett, Kristen Wiig, Billy Crudup, Troian Bellisario, Laurence Fishburne, Johannes Haukur Johannesson, James Urbaniak.
Bernadette Fox, a loving mom, becomes compelled to reconnect with her creative passions after years of sacrificing herself for her family. Bernadette's leap of faith takes her on an epic adventure that jump-starts her life and leads to her triumphant rediscovery.
DVD, wide screen.
Contents: Where'd you go, Bernadette.

I approve! submitted by majean on July 19, 2020, 7:37pm I adored this book, so I was both excited and nervous about it being made into a film. They did a marvelous job! Cate Blanchett was perfect in the role.

Fairly Entertaining submitted by denisemw on August 6, 2020, 11:22pm Good performances and scenery. The three main actors are great. it could have used more editing as it is a bit long. The exotic locales are great. Good story of compassion and letting people be who they are. I did not read the book, and don't plan to.

Rather predictable submitted by snabbleon on May 2, 2022, 8:22am I watched the first half hour to get the main characters straight and then hit fast forward for the rest of the movie. Nothing new here. Scenery was nice. Characters were thin and plot was meh. 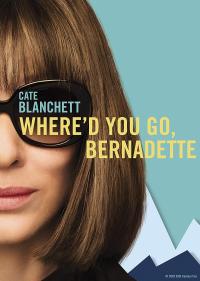