Title from container.
Widescreen (1.78:1).
Originally released as a motion picture in 2019.
Bonus features: Deleted scenes; Trailer.
Participants: Hatidze Muratova, Nazife Muratova, Hussein Sam, Ljutvie Sam.
"Hatidze lives with her ailing mother in the mountains of Macedonia, making a living cultivating honey using ancient beekeeping traditions. When an unruly family moves in next door, what at first seems like a balm for her solitude becomes a source of tension as they, too, want to practice beekeeping, while disregarding her advice"--Container.
DVD; Widescreen (1.78:1) presentation; Region 1, NTSC; Turkish Dolby digital 5.1.

Amazing! submitted by 21621032124198 on May 29, 2021, 7:20pm This was an amazing film. I was stunned to watch he main character care for her bees ... what an unusual relationship between human and insect. Sadly, other humans interfere in the lives of Hatidze and the bees and ruin things, but perhaps there is a happy ending... ? 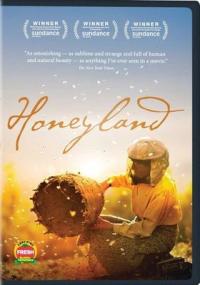