The Inventor : : out for Blood in Silicon Valley Originally released by Home Box Office, 2019.
"This disc is expected to play back in DVD video "play only" devices, and may not play back in other DVD devices, including recorders and PC drives."
Academy Award winner Alex Gibney directs a documentary investigating the rise and fall of Theranos, the one-time multibillion-dollar healthcare company founded by Elizabeth Holmes. In 2004, Elizabeth Holmes dropped out of Stanford to start a company that was going to revolutionize healthcare. In 2014, Theranos was valued at $9 billion, making Holmes, who was touted as "the next Steve Jobs," the youngest self-made female billionaire in the world. Just two years later, Theranos was cited as a "massive fraud" by the SEC, and its value was less than zero. Drawing on extraordinary access to never-before-seen footage and testimony from key insiders, director Alex Gibney will tell a Silicon Valley tale that was too good to be true. With all the drama of a real-life heist film, the documentary examines how this could have happened and who is responsible, while exploring the psychology of deception.
DVD, wide screen (16:9 ; 1.78:1) presentation; Dolby digital ; English 5.1

Informative submitted by yufamily on June 16, 2020, 3:54pm I've learned a lot about Elizabeth Holmes. It's a cautionary tale about being non-transparency!

Fame and fortune submitted by 21621032124198 on May 29, 2021, 7:23pm This was a very captivating documentary, reminding me how important it is to have an inquisitive and free press, and how careful scientists need to be with research and technology. I don't understand why Holmes pursued this track though - why didn't she stop to trouble shoot?

Bizarre story submitted by ilenekroll on July 29, 2021, 10:57pm Very good documentary. This woman is very complex. The way she scammed so many people as well as corporations is a very interesting story. 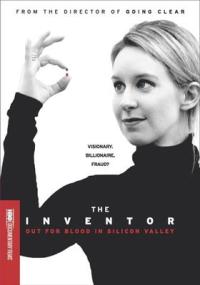