A fierce coming-of-age verse novel about identity and the power of drag.
Michael is a mixed-race gay teen growing up in London. All his life, he's navigated what it means to be Greek-Cypriot and Jamaican, but never quite feeling Greek or Black enough. As he gets older, Michael's coming out is only the start of learning who he is and where he fits in. When he discovers the Drag Society, he finally finds where he belongs and the Black Flamingo is born.

Finding Your Place submitted by KBarkerPeters on August 1, 2020, 8:01pm A beautiful novel in verse about a teenager finding his place in the world and finding people who "get" him, and respect him for who he is/wants to be.

Positive coming of age story submitted by samanthar on October 13, 2020, 11:17am The Black Flamingo is a YA book written in verse by poet and performer Dean Atta. It’s a queer coming of age story that follows Michael, a teenager living in London who’s half Greek-Cypriot, half Jamaican. Readers follow Michael from a young child who would rather receive a Barbie than a Ninja Turtle for his birthday, to a high schooler sharing his feelings to his crush, to a young adult finding his place on a college campus. Atta’s verse is rich, and expounds the themes of love, identity, and belonging.

strength of friendship, love, and kindness submitted by on June 11, 2021, 8:24pm The Black Flamingo is an empowering novel of mixed-race, gay, young man's search for identity. This debut poetry novel covers so many not-talked-about-enough grounds. For example, the sensation of not belonging because of the way you look. Or being afraid of who you are, and the guilty desire to leave a part of yourself behind. The protagonist, Michael (aka. Mike, Mikey, the Black Flamingo) endures and forgives while maturing to find his own voice and identity. The Black Flamingo is a sweeping novel about the strength of friendship, love, and kindness. 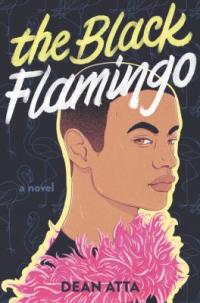