Originally released as a motion picture in 2014.
Widescreen (1.78:1).
Mackenzie Crook, Toby Jones, Rachael Stirling, Lucy Benjamin, Aimee-Ffion Edwards.
The charming comedy-drama from BBC Four tells the story of Andy and Lance, members of the Danebury Metal Detectors Club. As Andy pursues a degree in archaeology and Lance considers being a musician, they spend their days searching through fields with their metal detectors, dreaming of finding a fortune.
Blu-ray, wide screen (1.78:1); requires Blu-ray player.

This quirky show is so endearing---and its quirkiness doesn't play out like you might think it's gonna. submitted by lisa on July 27, 2021, 11:19pm Don't even know how I came across this show, but bless the library for having it. Sadly, I don't have a blu-ray player. I have to get at this one through multi-step streaming shenanigans. 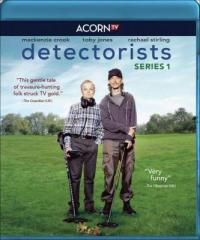