Includes discussion questions.
When a New York banker is discovered dead from an apparent morphine overdose in a Chicago hotel, the circumstances surrounding his untimely end are suspicious to say the least. The dead man had switched rooms the night before with a stranger he met and drank with in the hotel bar. And before that, he'd registered under a fake name at the hotel, told his drinking companion a fake story about his visit to the Windy City, and seemingly made no effort to contact the actress, performing in a local show, to whom he was married. All of which is more than enough to raise eyebrows among those who discovered the body. Enter theatre critic and amateur sleuth Riley Blackwood, a friend of the hotel's owner, who endeavors to untangle this puzzling tale as discreetly as possible. But when another detective working the case, whose patron is unknown, is thrown from a yacht deck during a party by an equally unknown assailant, the investigation makes a splash among Chicago society. And then several of the possible suspects skip town, leaving Blackwood struggling to determine their guilt or innocence--and their whereabouts. 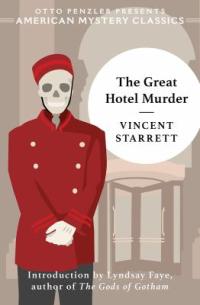