Everybody in, Nobody out : Inspiring Community at Michigan's University Musical Society Includes index.
"Ken Fischer has had a remarkable career as a producer. It isn't easy, financially or logistically, to persuade outfits like the Berlin Philharmonic or the Royal Shakespeare Company to visit an American college town regularly, but Fischer helped the University Musical Society (UMS) at the University of Michigan to punch above its weight, much to the envy of producers at larger venues who can't match his track record. Under his tenure as president, UMS expanded its offerings far beyond classical music and dance to include everything from early music to avant-garde theater and dance productions, and over 60 newly commissioned works in the past 25 years. The truly distinctive aspect of his tenure has been community outreach. Fischer has gone beyond normal work-with-the-local-high-schools tactics to engage in lasting partnerships and collaborations with many ethnic communities in southeastern Michigan that have included performance, education, co-sponsorship of tours and exchanges, and more. Everybody In, Nobody Out elaborates on his philosophy of inclusion, which he absorbed from his mentor, Patrick Hayes. The arts can generate community, not by handing down cultural enrichment from on high, but by meeting communities where they live, helping them preserve cultural heritage, incubate talent, and find ways to make community voices heard in a way that respects difference, and compensates artists fairly"-- Provided by publisher. 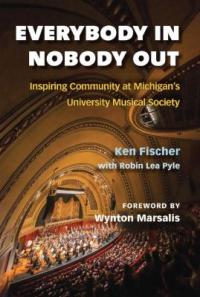