"Public radio co-hosts navigate mixed signals in Rachel Lynn Solomon's sparkling romantic comedy debut. Shay Goldstein has been a producer at her Seattle public radio station for nearly a decade, and she can't imagine working anywhere else. But lately it's been a constant clash between her and her newest colleague, Dominic Yun, who's fresh off a journalism master's program and convinced he knows everything about public radio. When the struggling station needs a new concept, Shay proposes a show that her boss green-lights with excitement. On The Ex Talk, two exes will deliver relationship advice live, on air. Their boss decides Shay and Dominic are the perfect co-hosts, given how much they already despise each other. Neither loves the idea of lying to listeners, but it's this or unemployment. Their audience gets invested fast, and it's not long before The Ex Talk becomes a must-listen in Seattle and climbs podcast charts. As the show gets bigger, so does their deception, especially when Shay and Dominic start to fall for each other. In an industry that values truth, getting caught could mean the end of more than just their careers"-- Provided by publisher.

Enjoyable but Predictable submitted by sdunav on June 11, 2021, 11:01am Two co-workers (a producer and a journalist) at a public radio station in Seattle pretend to be exes in order to host a radio show/podcast on relationships. It's fun reading about the ins and outs of public radio, but the plot is pretty predictable. I did enjoy the characters (especially the supporting characters, who weren't overly simplistic) and the romance. 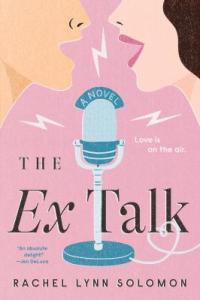