From a Whisper to a Rallying cry : : the Killing of Vincent Chin and the Trial That Galvanized the Asian American Movement "We need to talk about this" -- Timeline.
"A groundbreaking portrait of Vincent Chin and the murder case that took America's Asian American community to the streets in protest of injustice. America in 1982. Japanese car companies are on the rise and believed to be putting American autoworkers out of their jobs. Anti-Asian American sentiments simmer, especially in Detroit. A bar fight turns fatal, leaving Vincent Chin-a Chinese American man-beaten to death at the hands of two white men, autoworker Ronald Ebens and his stepson Michael Nitz. From a Whisper to a Rallying Cry is a searing examination of the killing and the trial and verdicts that followed. When Ebens and Nitz pled guilty to manslaughter and received only a ,000 fine and three years' probation, the lenient sentence sparked outrage in the Asian American community. This outrage galvanized the Asian American movement and paved the way for a new federal civil rights trial of the case. Extensively researched from court transcripts and interviews with key case witnesses-many speaking for the first time-Yoo has crafted a suspenseful, nuanced, and authoritative portrait of a pivotal moment in civil rights history, and a man who became a symbol against hatred and racism"-- Provided by publisher.

So many reasons to read this book! submitted by flemingj on June 26, 2021, 9:37am The story of Vincent Chin is so little known. What's even less known is the outcome of the trials and the coming together of the Asian American community to get justice for his family. 5 stars 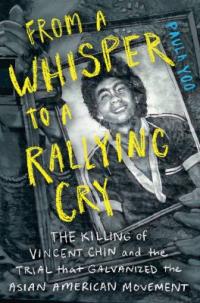