Colorization : : one Hundred Years of Black Films in a White World Movie night at Woodrow Wilson's White House -- The rare and extraordinary sighting of a Black filmmaker -- The imitation game -- A most peculiar kind of fame -- An interlude -- 1933, Babyface & Chico -- Flashback, The 1939 Academy Awards -- Dangerous love, starring Inger Stevens, Sammy Davis Jr., James Edwards, Ike Jones, and Dorothy Dandridge -- The pricey Black movie that vanished, and how it came to be -- Two cool cats with Caribbean roots disrupt Hollywood -- Flashback, 1964 Academy Awards -- The hustlers, detectives, and pimps who stunned Hollywood -- Foxy Brown arrives, vanishes, and gets resurrected -- Flashback, 1972 Academy Awards -- Berry Gordy dares to make movies -- Kunta Kinte seizes the moment -- Aiming a camera in Brooklyn -- The blackout that haunted a decade -- An interlude -- The ghost of Sidney -- The reckoning -- The front page -- Moving in the Moonlight -- The scourged back.
"The author of The Butler and Showdown examines 100 years of Black movies--using the struggles and triumphs of the artists, and the films themselves, as a prism to explore Black culture and the civil rights movement in America. Beginning in 1915 with D.W. Griffith's The Birth of a Nation--which glorified the Ku Klux Klan and became Hollywood's first blockbuster--Wil Haygood gives us an incisive, fascinating, little-known history, spanning more than a century, of Black artists in the film business, onscreen and behind the scenes. He makes clear the effects of changing social realities and events on the business of making movies and on what was represented on the screen: from Jim Crow and segregation to white flight and interracial relationships, from the assassination of Malcolm X to the O.J. Simpson trial to the Black Lives Matter movement. He considers the films themselves--including The Imitation of Life, Gone With the Wind, Porgy & Bess, the Blaxploitation films of the 70s, Do The Right Thing, 12 Years a Slave, and Black Panther. And he brings to new light the careers and significance of a wide range of historic and contemporary figures: Hattie McDaniel, Sidney Poitier, Berry Gordy, Alex Haley, Spike Lee, Billy Dee Willliams, Richard Pryor, Halle Berry, Ava Duvernay, and Jordan Peele, among many others. An important, timely book, Colorization gives us both an unprecedented history of Black cinema, and a groundbreaking perspective on racism in modern America"-- Provided by publisher. 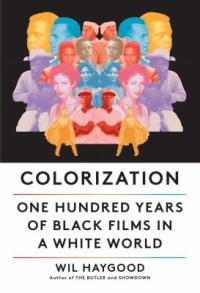