The Greatest Comeback : : how Team Canada Fought Back, Took the Summit Series, and Reinvented Hockey "In time for the 50th anniversary, the first book written with the complete cooperation of the whole team “All those years, we really had no idea what the Soviets had been up to. But we’d find out soon enough. And by the time we did, it was almost too late.”—Ken Dryden The Summit Series started on Saturday, September 2, 1972 when Cold War tensions could not have been higher. But then, that was the whole point of setting up this unprecedented hockey series. Team Canada featuring Canada’s best players – all NHL stars, half of them future Hall of Famers –would play an eight-game series, with four games played across Canada followed by four in Moscow. Team Canada was expected to crush their untried opponents eight games to zero – with back-ups playing the last four games. But five games into the series, they had mustered only one win against a tie and three stunning losses. With just three games left, Team Canada had to win all three in Moscow – all while overcoming years of animosity and mistrust among each other fostered during the Original Six era. They would also have to overcome the ridiculous Russian refereeing, which resulted in stick-swinging fights involving the players, a Canadian agent, and the Soviet soldiers; surmount every obstacle the Soviets and even the KGB could throw at the players and their wives; invent a hybrid style of play, combining the best of East and West, one that would change the sport more than any other factor before or since -- and win all three games in the last minute. And they did it all. The Greatest Comeback is a universal story about overcoming bitter feuds to forge a hard-earned team spirit, and inspire heroics against long odds and almost inhuman pressure – an experience so unforgettable that every member of Team Canada considers those eight games to be the highlight of their storied careers."-- Provided by publisher. 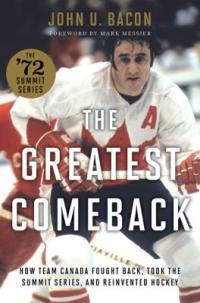