You're With Stupid : : Kranky, Chicago, and the Reinvention of Indie Music Includes index.
Hey Chicago -- Honk if you hate people, too -- That that is... is (not) : 1991-1992 -- Accelerating on a smoother road : 1992-1993 -- Analog technology makes space travel possible : 1994 -- Slow thrills : 1995 -- The taut and the tame : 1996 -- London was ridiculous : 1997 -- An audience hungry to hear what would happen next : 1998 -- Both ends fixed : 1999 -- After this they chose silence : 2000-2002 -- Epilogue. Specifically dissatisfied since 1993.
"Chicago has always been a fertile music town, but in the 1990s it was kind of the center of indie rock (the definition of which is malleable, as is the connotation, which the author discusses). Yet, even as local flagbearers like the Smashing Pumpkins and Urge Overkill were peaking on a national level, the city's underground was re-defining what indie rock could sound like. Chicago's supportive environment allowed for a wide range of music to thrive, and labels based in the city, like kranky records, were full of people who absorbed Chicago's electronic, jazz, folk, and noise music, and took advantage of a business environment that allowed them to put out bands that incorporated that aesthetic into the traditional, guitar-driven, Velvet Underground-inspired sound that many people think of when they think of "indie rock." As kranky's story illustrates, not all of these bands were in Chicago, but if they weren't, it was often a Chicago label that had the ear and the infrastructure to do something with this new music. In this way, the Chicago-shaped sounds filtered out into the rest of the world. As the author puts it, "Chicago-based and kranky musicians presaged the artistic collapse of the 'indie rock' genre and the expansion of listening options that followed the digital disruptions of the music business in the 21st century." You're with Stupid is the story of Chicago's kranky records, founded in 1993, and the larger history in which it evolved, as told by one of the label's co-founders. Bruce Adams explains the unique economic advantages Chicago labels had (a collegial spirit within the industry, but also things like international distribution opportunities through O'Hare Airport). He uses kranky bands to illustrate how their music and their career trajectories veered from other high-profile Grunge and post-Grunge acts, taking the genre in new directions, with varying degrees of success. It is laced with his in-the-scene memoir and illustrated with photos and ephemera from the time. The story ends in 2002, as technology was throwing the music business into another transitional period that pulled the focus away from Chicago and labels like kranky"-- Provided by publisher. 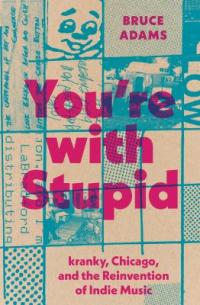