Untold Tales, Unsung Heroes is a history of Detroit's African American community told by the men and women who lived it. More than one hundred individuals who lived in Detroit at some time during the period from 1918 to 1967 share stories about ordinary life - families and neighborhoods, community and religious life, school and work. They also describe extraordinary events - the great migration from the South, the depression, World War II, the 1943 race riot, the civil rights movement, the civil disturbance of 1967, and the Vietnam War. Their anecdotal testimonies and reminiscences provide invaluable information about the institutions, lifestyles, relationships, and politics that constitute the social experience of black life in Detroit. The moving, sometimes contradictory views of housekeepers, business owners, factory workers, union organizers, teachers, and corporate executives present a panorama of experiences and perceptions. The tales convey the individual and collective search for equality in education, housing, and employment; struggles against racism; participation in unions and the civil rights movement; and pain and loss that resulted from racial discrimination. By featuring the histories of blacks living in Detroit during the first six decades of the century, this unique oral history contributes immeasurably to our understanding of the development of the city. Arranged chronologically, the book is divided into decades representing significant periods of history in Detroit and in the nation. The period of 1918 to 1927 was marked by mass migration to Detroit, while the country was in the throes of the depression from 1928 to 1937. From 1938 to 1947, World War II and the 1943 race riot profoundly affected the lives of Detroiters. In the decade from 1948 to 1957 the beginnings of civil unrest became apparent. From 1958 to 1967 America was shaken by the upheaval of war and assassination, and Detroit was scarred by the violence of civil disturbance. Previously published histories of Detroit have typically excluded any examination of life in the black community. Untold Tales, Unsung Heroes, however, offers an authentic and personal look at the reality of life among African Americans in the city, bringing to light the perceptions and contributions of true heroes and heroines whose stories have been told here for the first time. 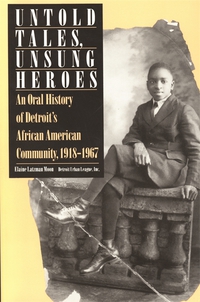