Charles was a surprisingly kindhearted man--he literally once gave the skin off of his back to an acquaintance who suffered from severe burns-- who also grew up to swindle loads of people out of their money. His trick was so infamous it became synonymous with his name. Yes, Charles Ponzi is the father of the Ponzi Scheme (he wasn’t the first to run this type of con, he just did it with excessive style). Perhaps it’s not so strange that Ponzi grew up to have a strange relationship with money. He was born in 1882 to a once wealthy Italian family who had fallen on hard times. Burdened with the memory of wealth but the reality of poverty, young Charles’ family sent him to the United States with instructions not to return until he was good and rich--it was what other families were doing, so surely it would work with Charles! Off Charles went, arriving in the United States with $2.50 in his pocket because he’d lost the rest of his money gambling on the long ship ride across the ocean. His old habits hadn’t gone away just because he was on a mission. Find the US city that Ponzi landed in and search for it in the AADL catalog to find your first code!

This badge has been awarded to 436 players

I’m stuck on the 3rd clue. I’ve looked on Wikipedia and a few other websites but I haven’t seen anything. Any hints? Thanks!

I'm glad you were able to…

I'm glad you were able to figure it out! Way to stick with it :)

I'm laughing because I used…

I'm laughing because I used to buy International Reply Coupons before email was available, when contacting companies overseas. No Ponzi scheme for me, however.

I'm stuck on the fourth one…

I'm stuck on the fourth one. I tried searching what food company he purchased, but I didn't see it.
please help!
Thx a lot! 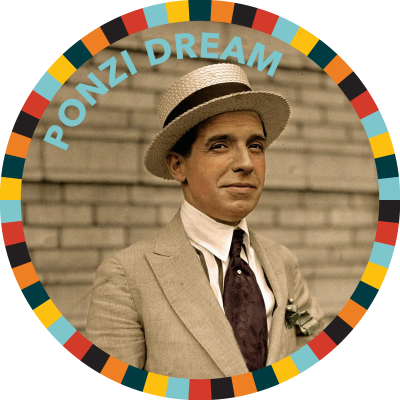