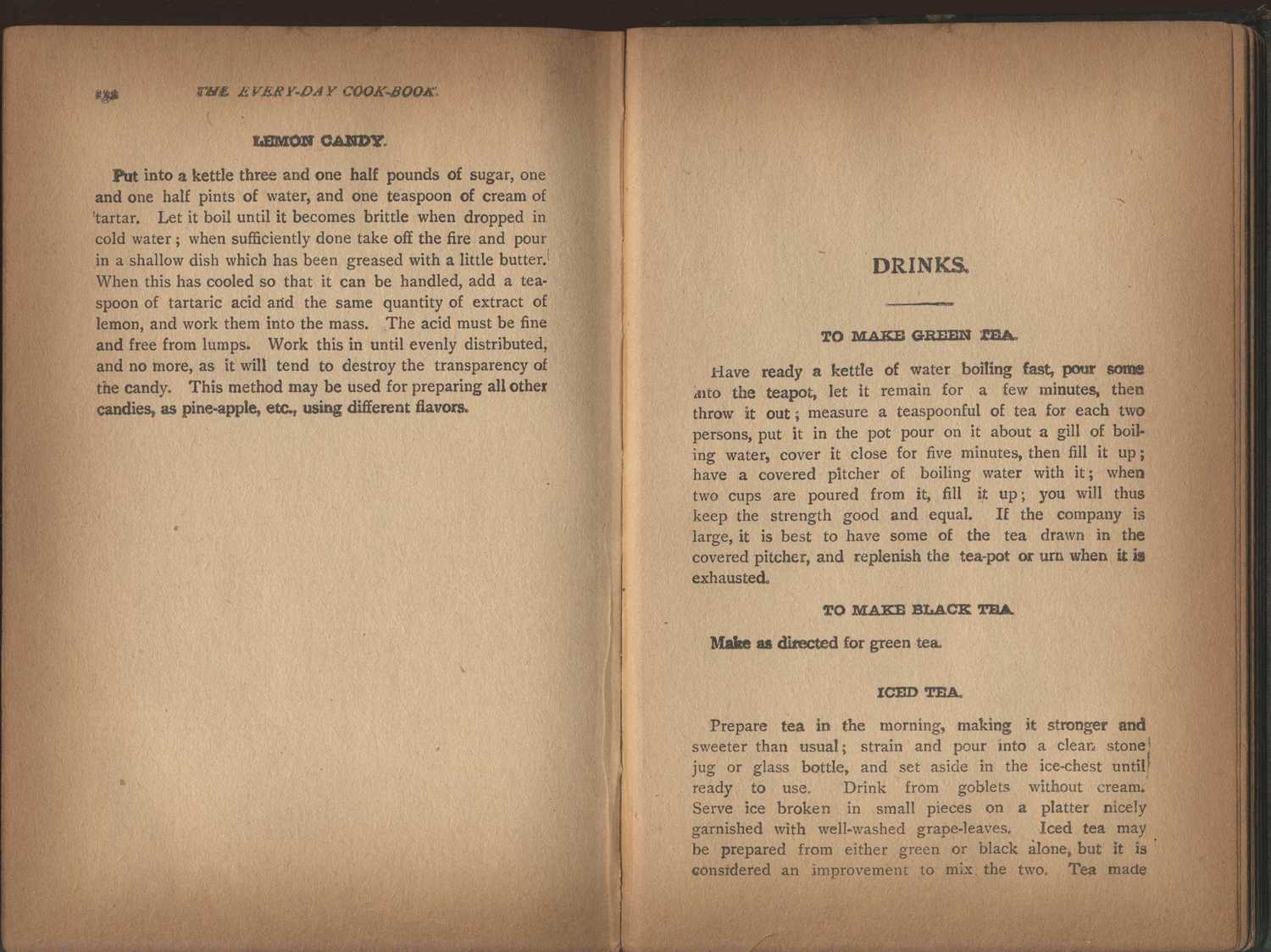 Put into a kettle three and one half pounds of sugar, one and one half pints of water, and one teaspoon of cream of tartar. Let it boil until it becomes brittle when dropped in cold water; when sufficiently done take off the fire and pour in a shallow dish which has been greased with a little butter. When this has cooled so that it can be handled, add a teaspoon of tartaric acid and the same quantity of extract of lemon, and work them into the mass. The acid must be fine and free from lumps. Work this in until evenly distributed, and no more, as it will tend to destroy the transparency of the candy. This method may be used for preparing all other candies, as pineapple, etc., using different flavors.

Two cups of brown sugar, one cup of molasses, one cup chocolate grated fine, one cup of boiled milk, one tablespoon of flour; butter the size of a large English walnut; let it boil slowly and pour on flat tins to cool; mark off while warm.

One cup of molasses, two cups of sugar, one tablespoon vinegar, a little butter and vanilla; boil ten minutes, then cool it enough to pull.

To one grated coconut add half its weight of sugar and the white of one egg, cut to a stiff froth; mix thoroughly and drop on buttered white paper or tin sheets. Bake fifteen minutes.

One pound of powdered loaf-sugar, one teacupful of water, one quarter pound of butter, six drops of essence of lemon. Put the water and sugar into a brass pan, and beat the butter to a cream. When the sugar is dissolved, add the butter, and keep stirring the mixture over the fire until it sets when a little is poured on to a buttered dish; and just before the toffee is done add the essence of lemon. Butter a dish or tin, pour on it the mixture, and when cool it will easily separate from the dish. Butter-Scotch, an excellent thing for coughs, is made with brown, instead of white sugar, omitting the water, and flavored with one half ounce of ginger. It is made in the same manner as toffee.

Three and one half pounds of sugar to one and one half pints of water; dissolve in the water before putting with the sugar one quarter of an ounce of fine white gum arabic, and when added to the sugar put in one teaspoon of cream of tartar. The candy should not be boiled quite to the brittle stage. The proper degree can be ascertained if, when a small skimmer is put in and taken out, when blowing through the holes of the skimmer, the melted sugar is forced through in feathery filaments; remove from the fire at this point and rub the syrup against the sides of the dish with an iron spoon. If it is to be a chocolate candy, add two ounces of chocolate finely sifted and such flavoring as you prefer, vanilla, rose, or orange. If you wish to make coconut candy, add this while soft and stir until cold.

One and a half cups sugar, 1/2 cup milk, 2 teaspoonfuls butter, 1/2 cup nut meats or 1-3 cup shredded coconut, 1/2 teaspoonful vanilla. Put butter in granite saucepan; when melted, add sugar and milk and stir until sugar is dissolved; heat to boiling point and boil 12 minutes. Remove from the fire, add coconut and vanilla and beat until the mixture begins to sugar slightly on the edge of the pan. Pour on buttered pan, cool. 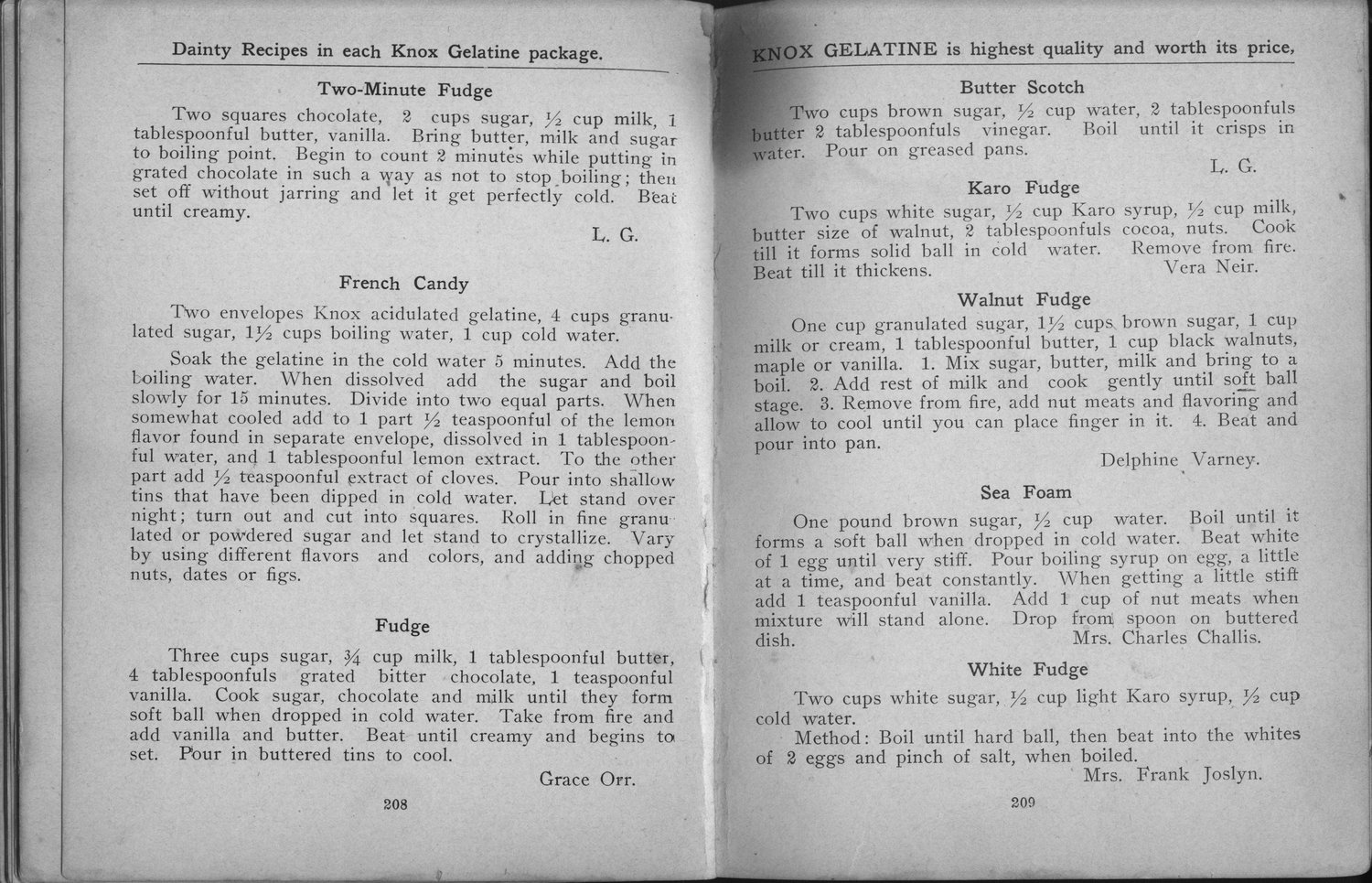 One pound brown sugar, 1/2 cup water. Boil until it forms a soft ball when dropped in cold water. Beat white of 1 egg until very stiff. Pour boiling syrup on egg, a little at a time, and beat constantly. When getting a little stiff add 1 teaspoonful vanilla. Add 1 cup of nut meats when mixture will stand alone. Drop from spoon on buttered dish.