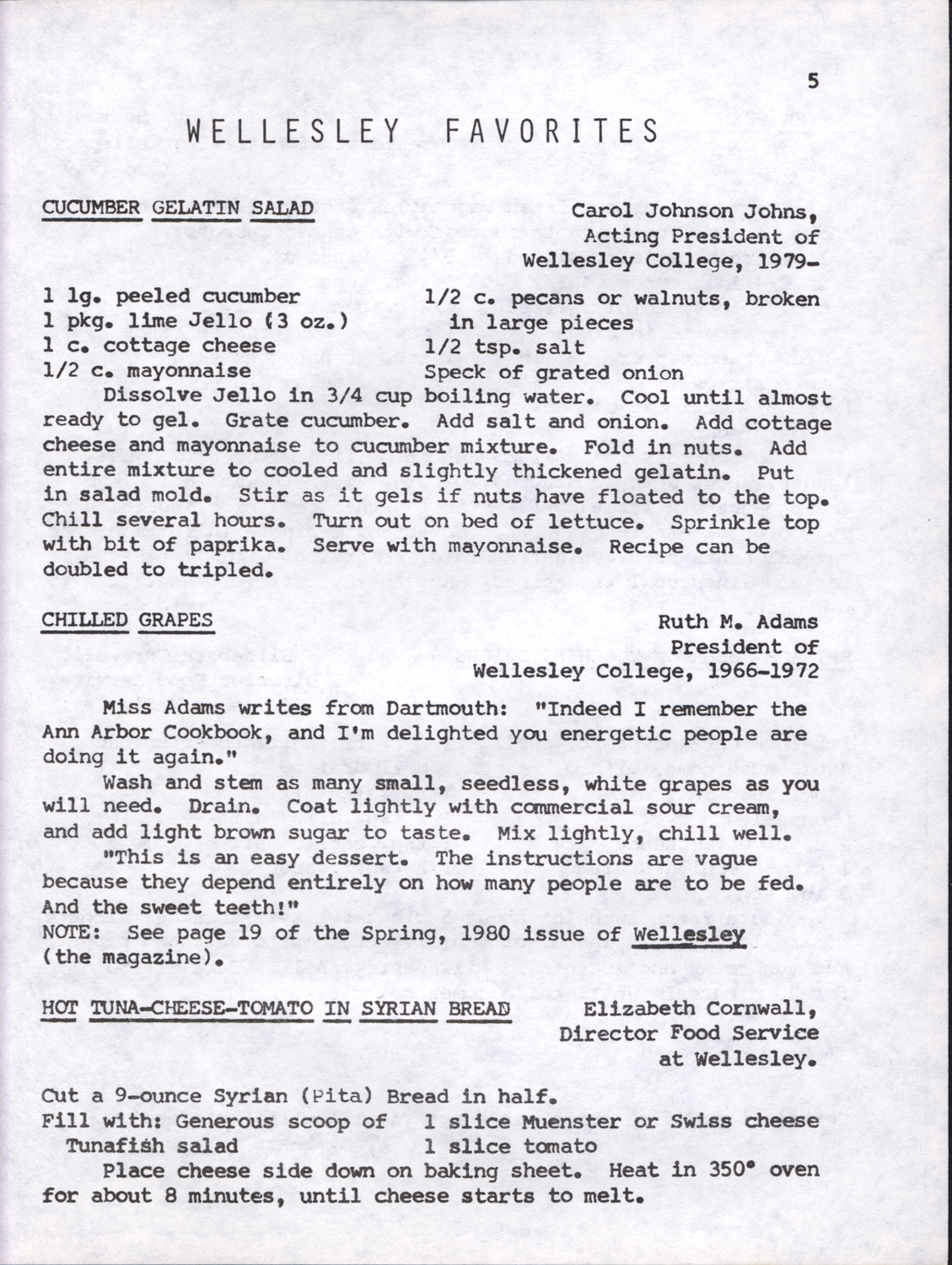 Miss Adams writes from Dartmouth: "Indeed I remember the Ann Arbor Cookbook, and I'm delighted you energetic people are doing it again."

"This is an easy dessert. The instructions are vague because they depend entirely on how many people are to be fed. And the sweet teeth!" 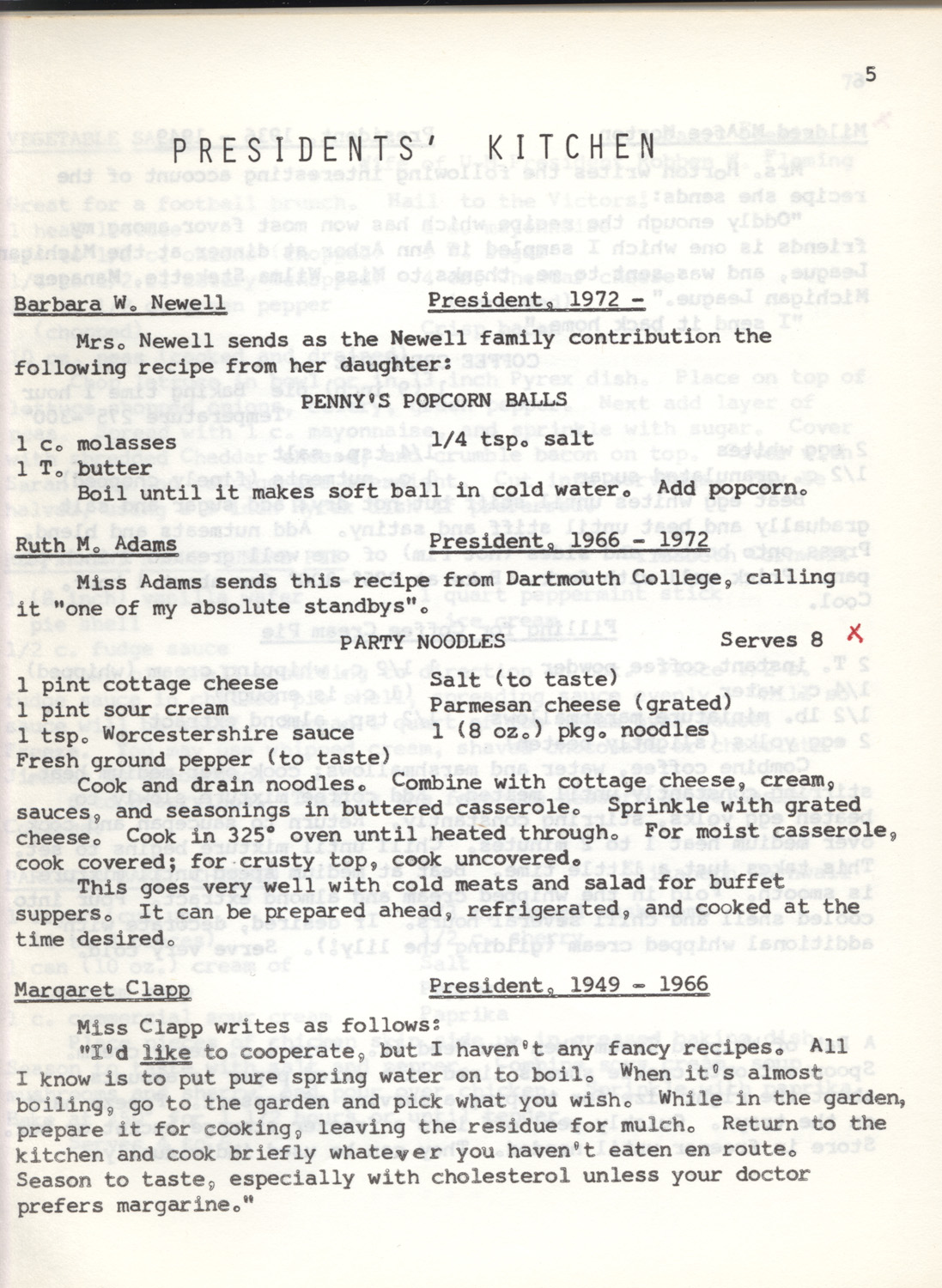 Mrs. Newell sends as the Newell family contribution the
following recipe from her daughter: 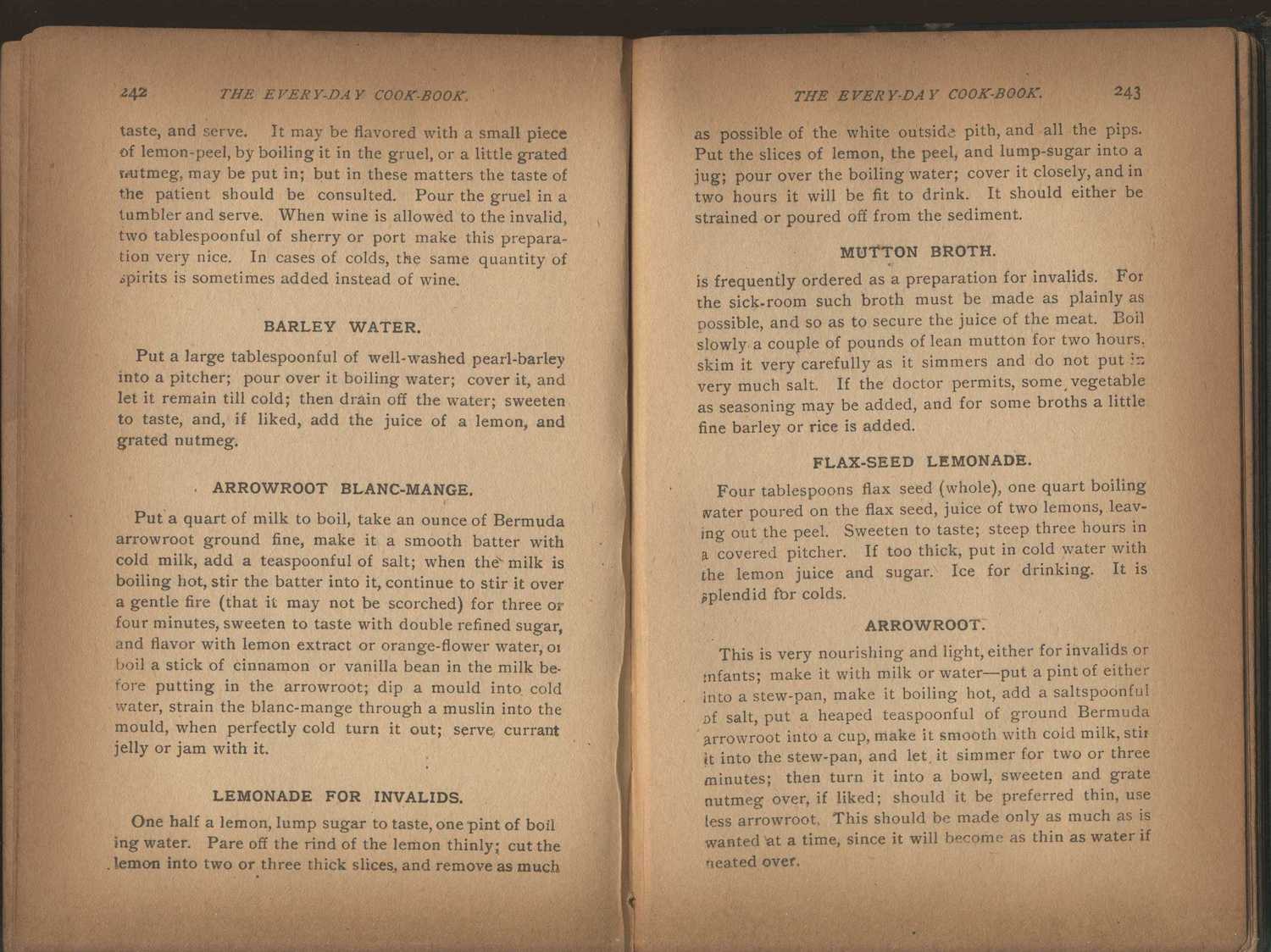 Put a quart of milk to boil, take an ounce of Bermuda arrowroot ground fine, make it a smooth batter with cold milk, add a teaspoonful of salt; when the milk is boiling hot, stir the batter into it, continue to stir it over a gentle fire (that it may not be scorched) for three or four minutes, sweeten to taste with double refined sugar, and flavor with lemon extract or orange-flower water, on boil a stick of cinnamon or vanilla bean in the milk before putting in the arrowroot; dip a mld into cold water, strain the blanc-mange through a muslin into the mold, when perfectly cold turn it out; serve currant jelly or jam with it. 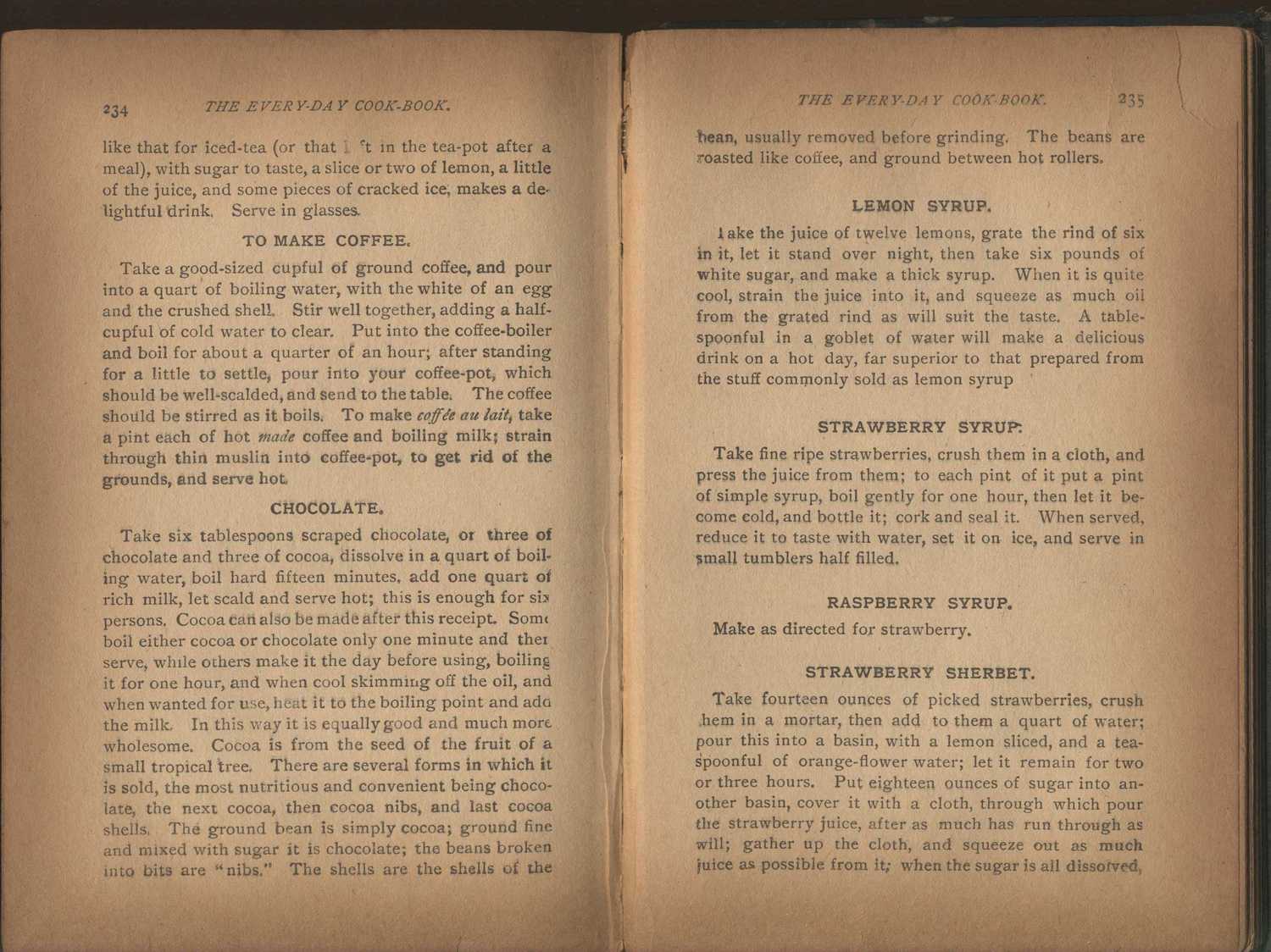 Take fourteen ounces of picked strawberries, crush them in a mortar, then add to them a quart of water; pour this into a basin, with a lemon sliced, and a teaspoonful of orange-flower water; let it remain for two or three hours. Put eighteen ounces of sugar into another basin, cover it with a cloth, through which pour the strawberry juice, after as much has run through as will; gather up the cloth, and squeeze out as much juice as possible from it; when the sugar is all dissolved, strain it again; set the vessel containing it on ice, until ready to serve.

To every pound of sugar allow one half pint of water, one half the white of an egg. Put the sugar into a well-tinned saucepan, with the water, and when the former is dissolved, set it over a moderate fire, adding the well-beaten egg before the mixture gets warm, and stir it well together. When it boils, remove the scum as it rises, and keep it boiling until no more appears, and the syrup looks perfectly clear; then strain it through a fine sieve or muslin bag, and put it back into the saucepan. Boil it again like caramel, until it is brittle when a little is dropped in a basin of cold water; it is then sufficiently boiled. Add a little lemon juice and a few drops of the essence of lemon, and let it stand for a minute or two. Have ready a marble slab or large dish rubbed over with salad oil; pour the sugar on it, and cut it into strips with a pair of scissors; these strips should then be twisted, and the barley-sugar stored a way in a very dry place. It may be formed into lozenges or drops, by dropping the sugar in a very small quantity at a time on to the oiled slab or dish

Put one ounce of soaked isinglass, six ounces of loaf-sugar, half a stick of vanilla, and one pint of milk into a saucepan; boil slowly; and stir all the time until the isinglass is dissolved; strain the mixture, and when a little cool mix it with a pint of thick cream. Beat thoroughly until it thickens. Pour into a large or individual molds, and put in ice-box until wanted.

Three pints of cream, two large ripe pineapples, two pounds powdered sugar; slice the pineapples thin, scatter the sugar between the slices, cover and let the fruit stand three hours, cut or chop it up in the syrup, and strain through a hair sieve or double bag of coarse lace; beat gradually into the cream, and freeze as rapidly as possible; reserve a few pieces of pineapple unsugared cut into square bits, and stir through cream when half frozen, first a pint of well-whipped cream, and then the fruit. Peach ice-cream may be made in the same way.

Take six ounces of chocolate, a pint of cream, half a pint of new milk, and half a pint of sugar. Rub the chocolate down into the milk and mix thoroughly, adding the cream and sugar. The milk should be heated almost to boiling. Heat until it thickens, stirring constantly. Strain and set aside to cool, afterwards freeze. This makes perhaps the most favorite of ice-creams.

Sprinkle strawberries with sugar, wash well and rub through a sieve; to a pint of the juice add half a pint of good cream; make it very sweet; freeze, and when beginning to set, stir lightly one pint of cream whipped, and lastly a handful of whole strawberries, sweetened. It may then be put in a mold and imbedded in ice, or kept in the freezer; or mash with a potato-pounder in an earthern bowl one quart of strawberries with one pound of sugar, rub it through a colander, add one quart of sweet cream and freeze. Or, if not in the strawberry season, use the French bottled strawberries (or any canned ones), mix juice with half a pint of cream, sweeten and freeze; when partially set add whipped cream and strawberries.

Take two drachms of vanilla or lemon-peel, one quart of milk, half a pound of sugar, one pint of cream, and the yolks of three eggs; beat the yolks well, and stir them with the milk, then add the other ingredients; set it over a moderate fire, and stir it constantly with a silver spoon until it is boiling hot, then take out the lemon peel or vanilla, and, when cold, freeze it.