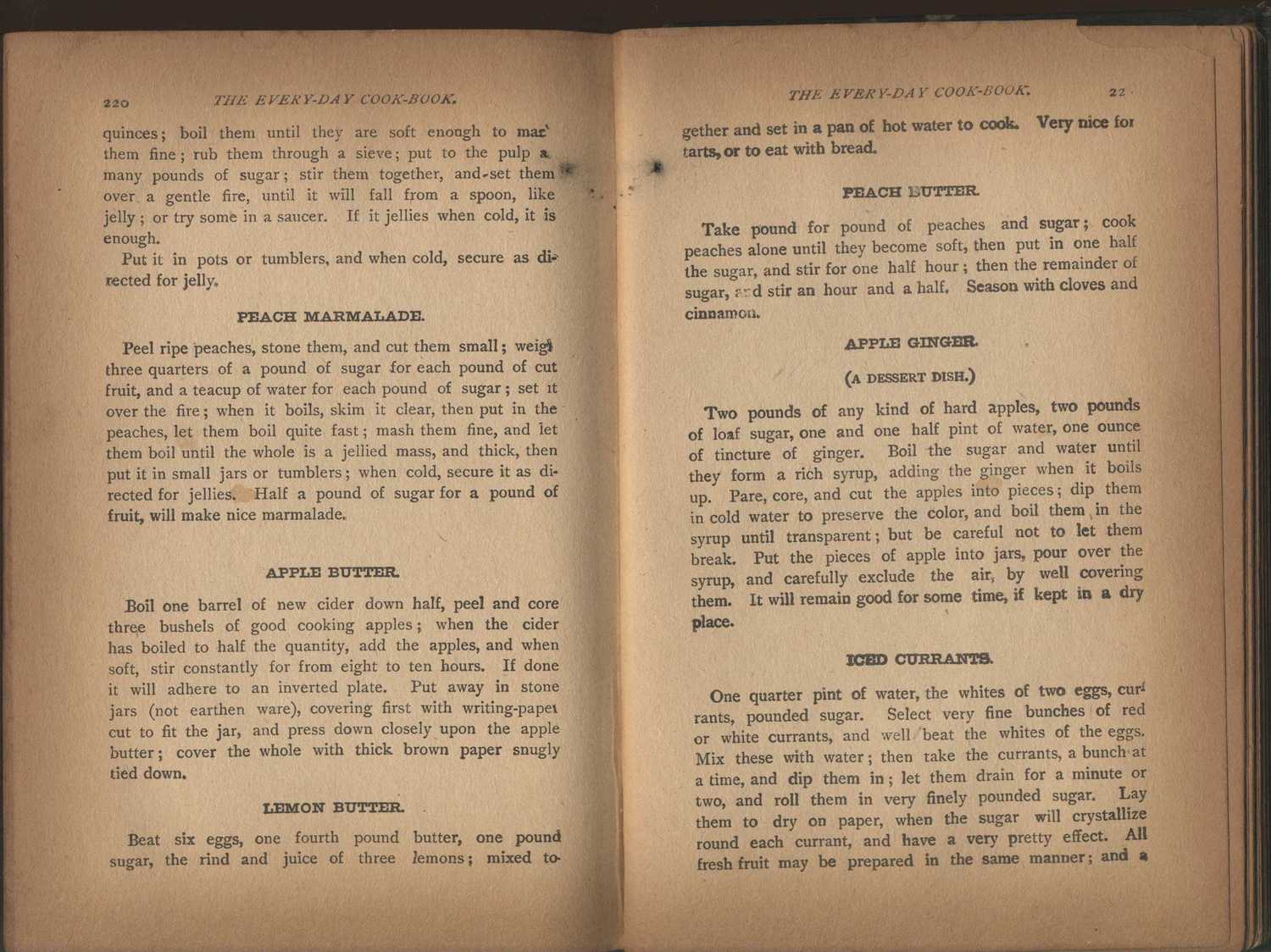 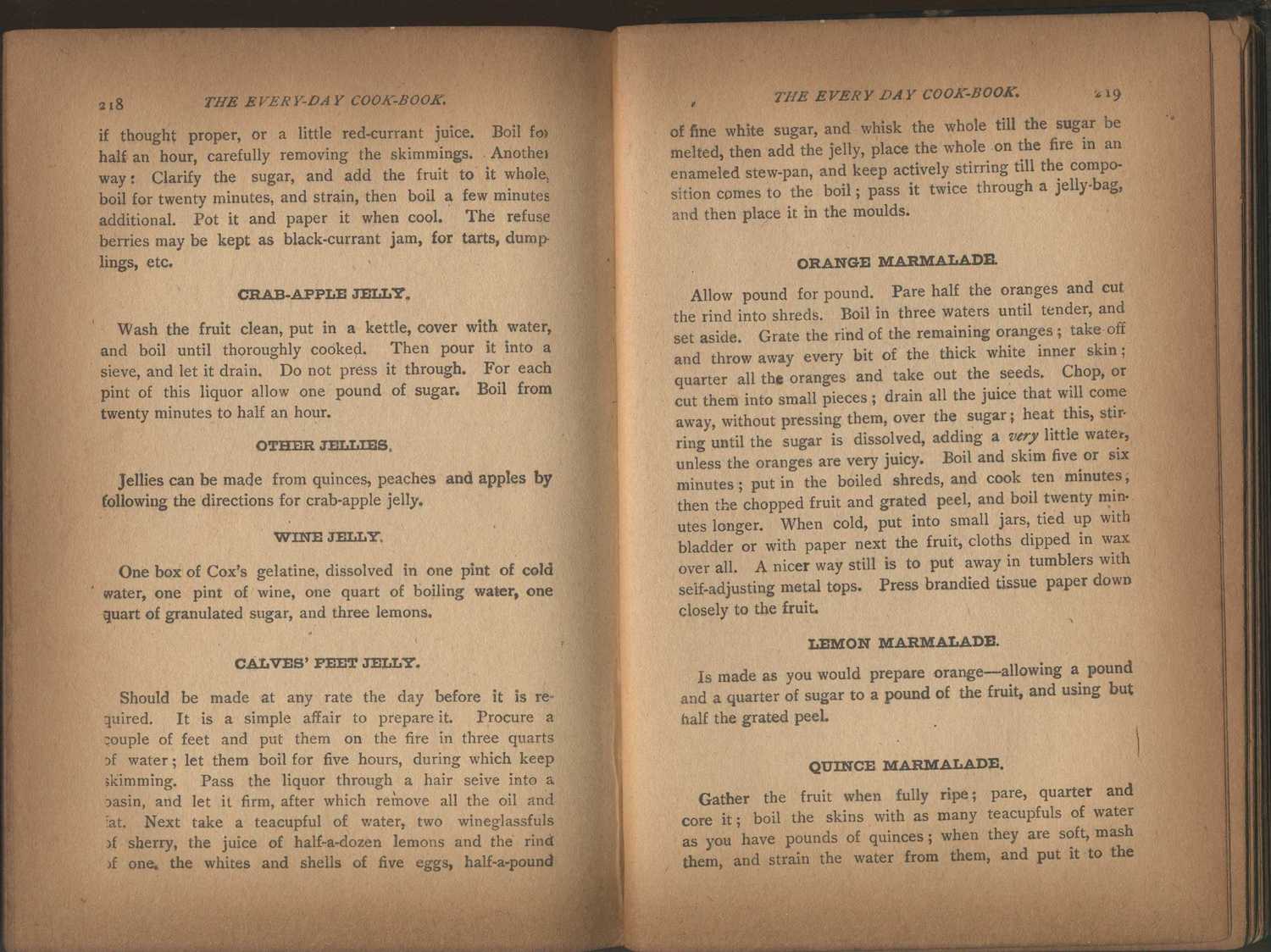 Gather the fruit when fully ripe; pare, quarter and core it; boil the skins with as many teacupfuls of water as you have pounds of quinces; when they are soft, mash them, and strain the water from them, and put it to the quinces; boil them until they are soft enough to mash them fine; rub them through a sieve; put to the pulp as many pounds of sugar; stir them together, and set them over a gentle fire, until it will fall from a spoon, like jelly; or try some in a saucer. If it jellies when cold, it is enough. Put it in pots or tumblers, and when cold, secure as directed for jelly.

Is made as you would prepare orange---allowing a pound and a quarter of sugar to a pound of the fruit, and using but half the grated peel.

Allow pound for pound. Pare half the oranges and cut the rind into shreds. Boil in three waters until tender, and set aside. Grate the rind of the remaining oranges; take off and throw away every bit of the thick white inner skin; quarter all the oranges and take out the seeds. Chop, or cut them into small pieces; drain all the juice that will come away, without pressing them, over the sugar; heat this, stirring until the sugar is dissolved, adding a very little water, unless the oranges are very juicy.

Boil and skim five or six minutes; put in the boiled shreds, and cook ten minutes, then the chopped fruit and grated peel, and boil twenty minutes longer. When cold, put into small jars, tied up with bladder or with paper next the fruit, cloths dipped in wax over all. A nicer way still is to put away in tumblers with self-adjusting metal tops. Press brandied tissue paper down closely to the fruit.

Pare, core, and quarter your fruit, then weigh it and allow an equal quantity of white sugar. Take the parings and cores and put in a preserving kettle; cover them with water and boil for half an hour; then strain through a hair sieve and put the juice back into the kettle and boil the quinces in it a little at a time until they are tender; lift out as they are done with a drainer and lay on a dish; if the liquid seems scarce add more water.

When all are done throw in the sugar and allow it to boil ten minutes before putting in the quinces; let them boil until they change color, say one hour and a quarter, on a slow fire; while they are boiling occasionally slip a silver spoon under them to see that they do not burn, but on no account stir them. Have two fresh lemons cut in thin slices, and when the fruit is being put in jars lay a slice or two in each.

Pare the fruit, and be sure you take out all the eyes and discolored parts. Cut in slices, and cut the slices in small bits, taking out the core. Weigh the fruit, and put in a pan with half as many pounds of sugar as of fruit. Let it stand over night. In the morning put it over the fire and let it boil rapidly for a minute only, as cooking long discolors it. Put it in the jars as directed.

To each pound of fruit allow half a pound of sugar, and a pint of water to three pounds of sugar. When the syrup is boiling hot, drop in the apples. They will cook very quickly. When done, fill a jar with the fruit, and fill it up with syrup.

Pare the citrons and cut them into slices about an inch and a half thick, then into strips the same thickness, leaving them the full length of the fruit; take out all the seeds with a small knife, then weigh, and to each pound of citron put a pound of white sugar, make a syrup; to ten pounds put a pint of water, and simmer gently for twenty minutes; then put in the citron and boil for one hour, or until tender; before taking off the fire put in two lemons, sliced thin, seeds taken out, and two ounces of root ginger; do not let them boil long after the lemon and ginger are put in; do not stir them while boiling. The above is very fine if carefully attended to. 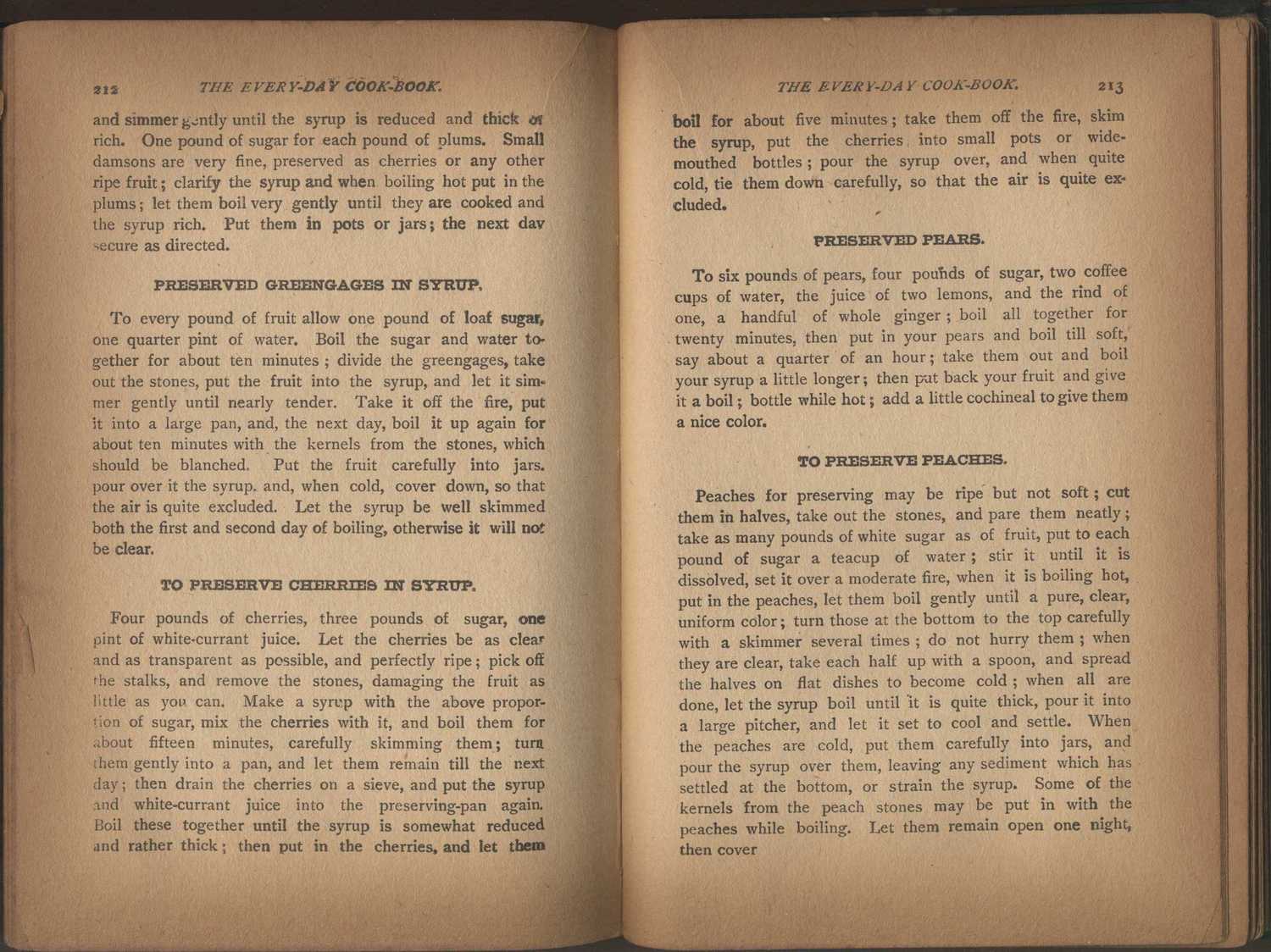 Peaches for preserving may be ripe but not soft; cut them in halves, take out the stones, and pare them neatly; take as many pounds of white sugar as of fruit, put to each pound of sugar a teacup of water; stir it until it is dissolved, set it over a moderate fire, when it is boiling hot, put in the peaches, let them boil gently until a pure, clear, uniform color; turn those at the bottom to the top carefully with a skimmer several times; do not hurry them; when they are clear, take each half up with a spoon, and spread the halves on flat dishes to become cold; when all are done, let the syrup boil until it is quite thick, pour it into a large pitcher, and let it set to cool and settle. When the peaches are cold, put them carefully into jars, and pour the syrup over them, leaving any sediment which has settled at the bottom, or strain the syrup. Some of the kernels from the peach stones may be put in with the peaches while boiling. Let them remain open one night, then cover

To six pounds of pears, four pounds of sugar, two coffee cups of water, the juice of two lemons, and the rind of one, a handful of whole ginger; boil all together for twenty minutes, then put in your pears and boil till soft, say about a quarter of an hour; take them out and boil your syrup a little longer; then put back your fruit and give it a boil; bottle while hot; add a little cochineal to give them a nice color.