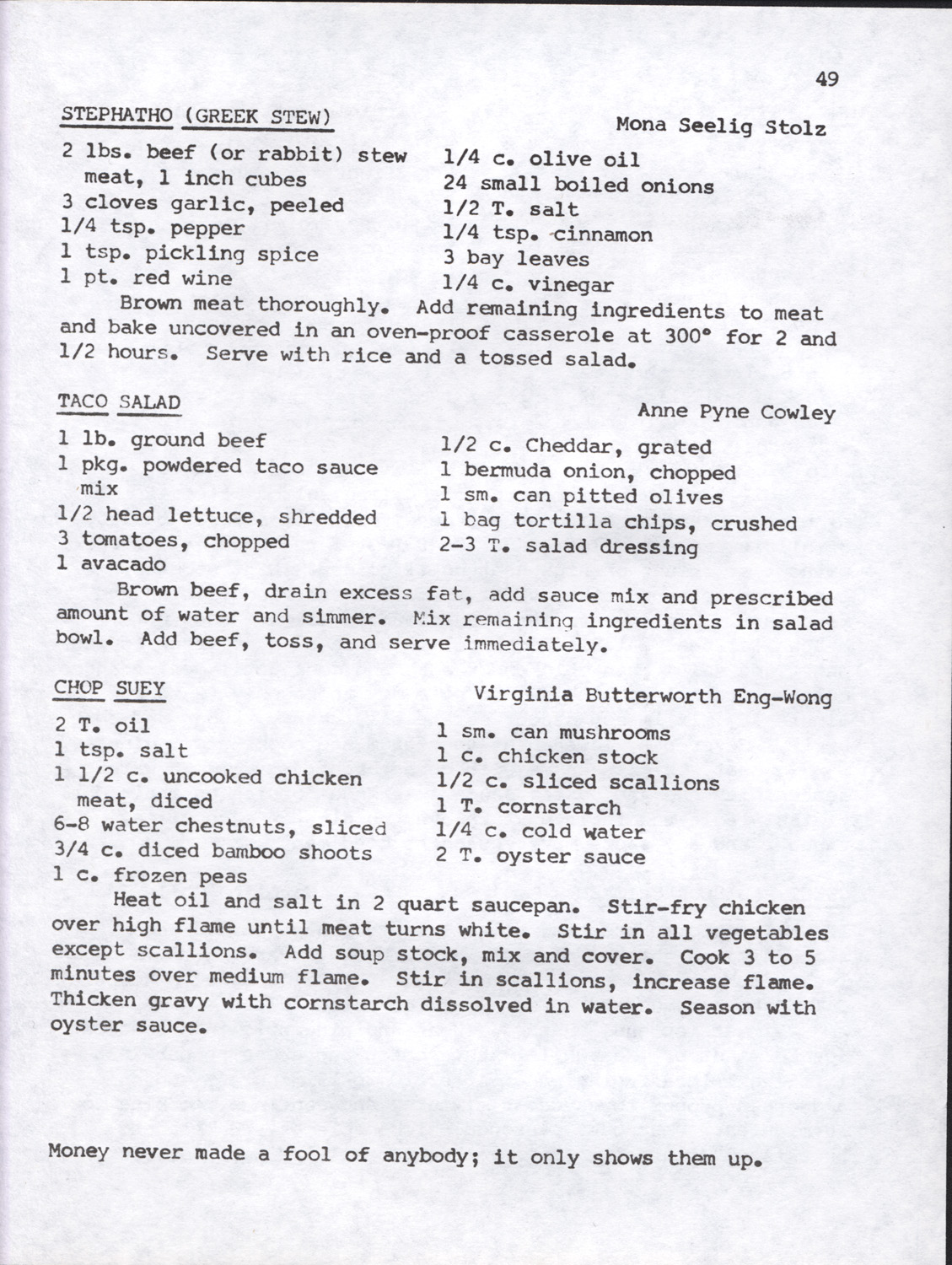 Brown meat thoroughly. Add remaining ingredients to meat and bake uncovered in an oven-proof casserole at 300° for 2 and 1/2 hours. Serve with rice and a tossed salad. 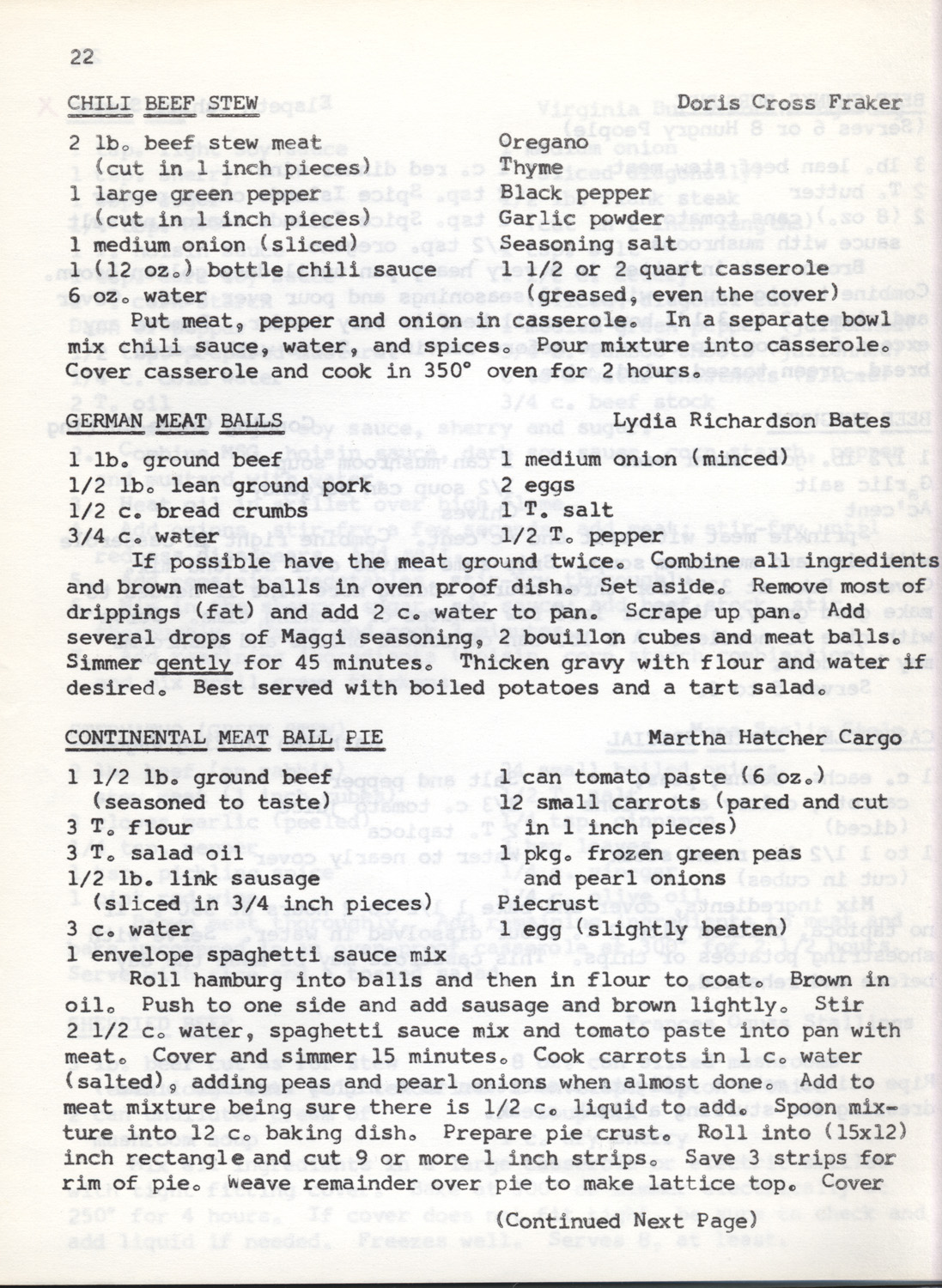 Put meat, pepper and onion in casserole. In a separate bowl mix chili sauce, water, and spices. Pour mixture into casserole. Cover casserole and cook in 350 degree oven for 2 hours. 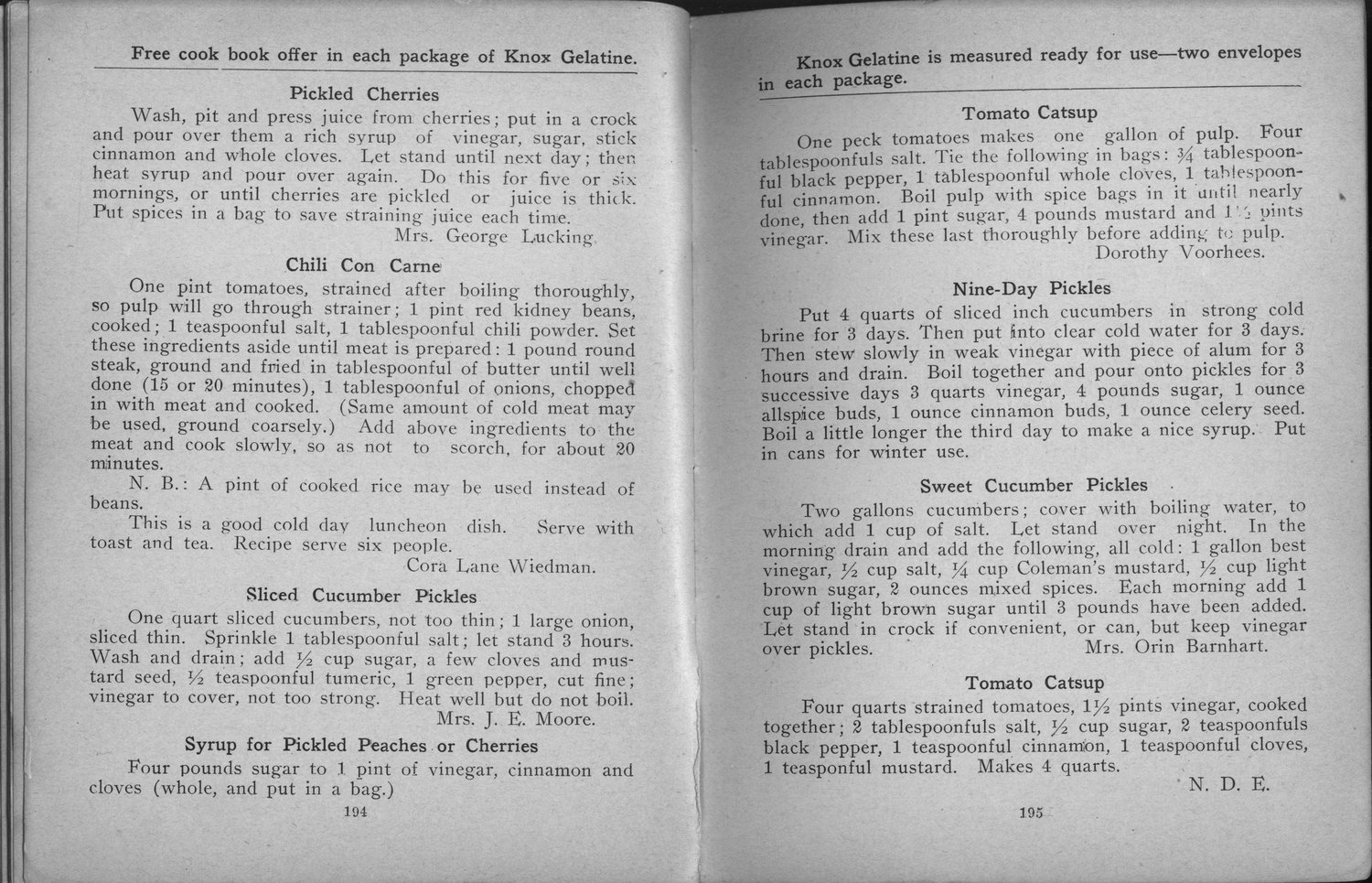 One pint tomatoes, strained after boiling thoroughly, so pulp will go through strainer; 1 pint red kidney beans, cooked; 1 teaspoonful salt, 1 tablespoonful chili powder. Set these ingredients aside until meat is prepared: 1 pound round steak, ground and fried in tablespoonful of butter until well done (15 or 20 minutes), 1 tablespoonful of onions, chopped in with meat and cooked. (Same amount of cold meat may be used, ground coarsely.) Add above ingredients to the meat and cook slowly, so as not to scorch, for about 20 minutes.

N. B.: A pint of cooked rice may be used instead of beans. This is a good cold day luncheon dish. Serve with toast and tea. Recipe serve six people. 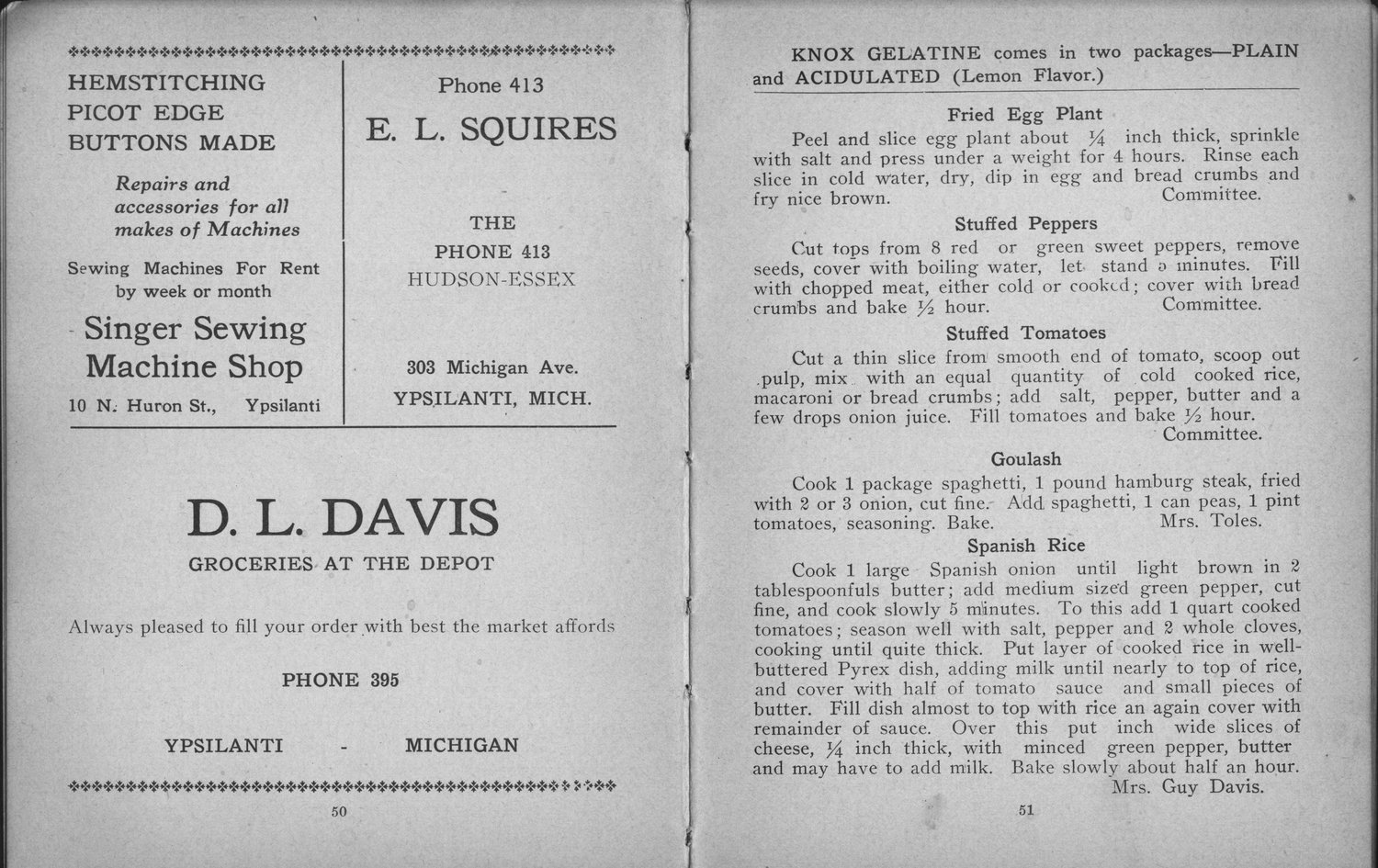 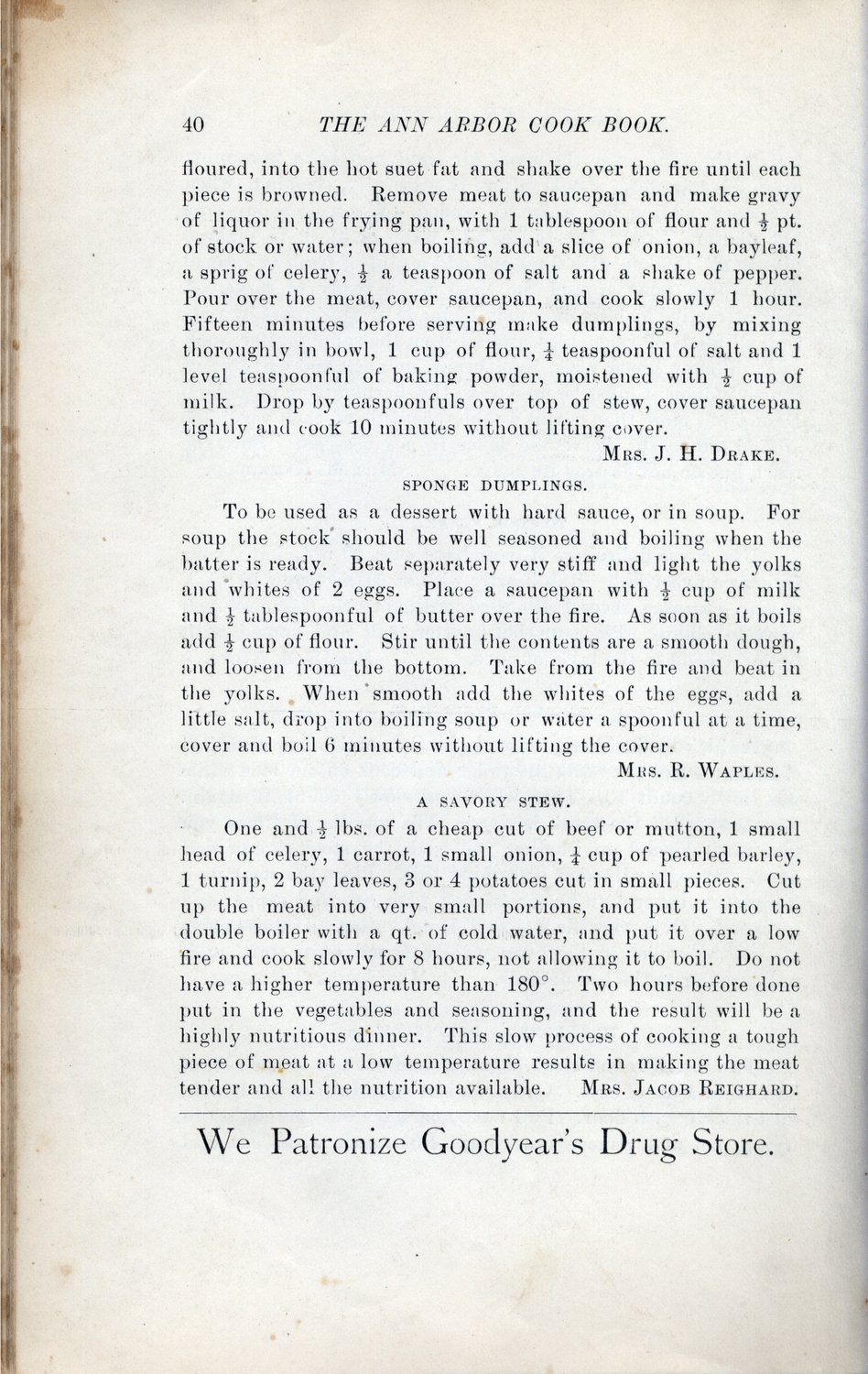 One and 1/2 lbs. of a cheap cut of beef or mutton
1 small head of celery
1 carrot
1 small onion
1/4 cup of pearled barley
1 turnip
2 bay leaves
3 or 4 potatoes cut, in small pieces

Cut up the meat into very small portions, and put it into the double boiler with a qt. of cold water, and put it over a low fire and cook slowly for 8 hours, not allowing it to boil. Do not have a higher temperature than 180 degrees. Two hours before done put in the vegetables and seasoning, and the result will be a highly nutritious dinner. This slow process of cooking a tough piece of meat at a low temperature results in making the meat tender and all the nutrition available. 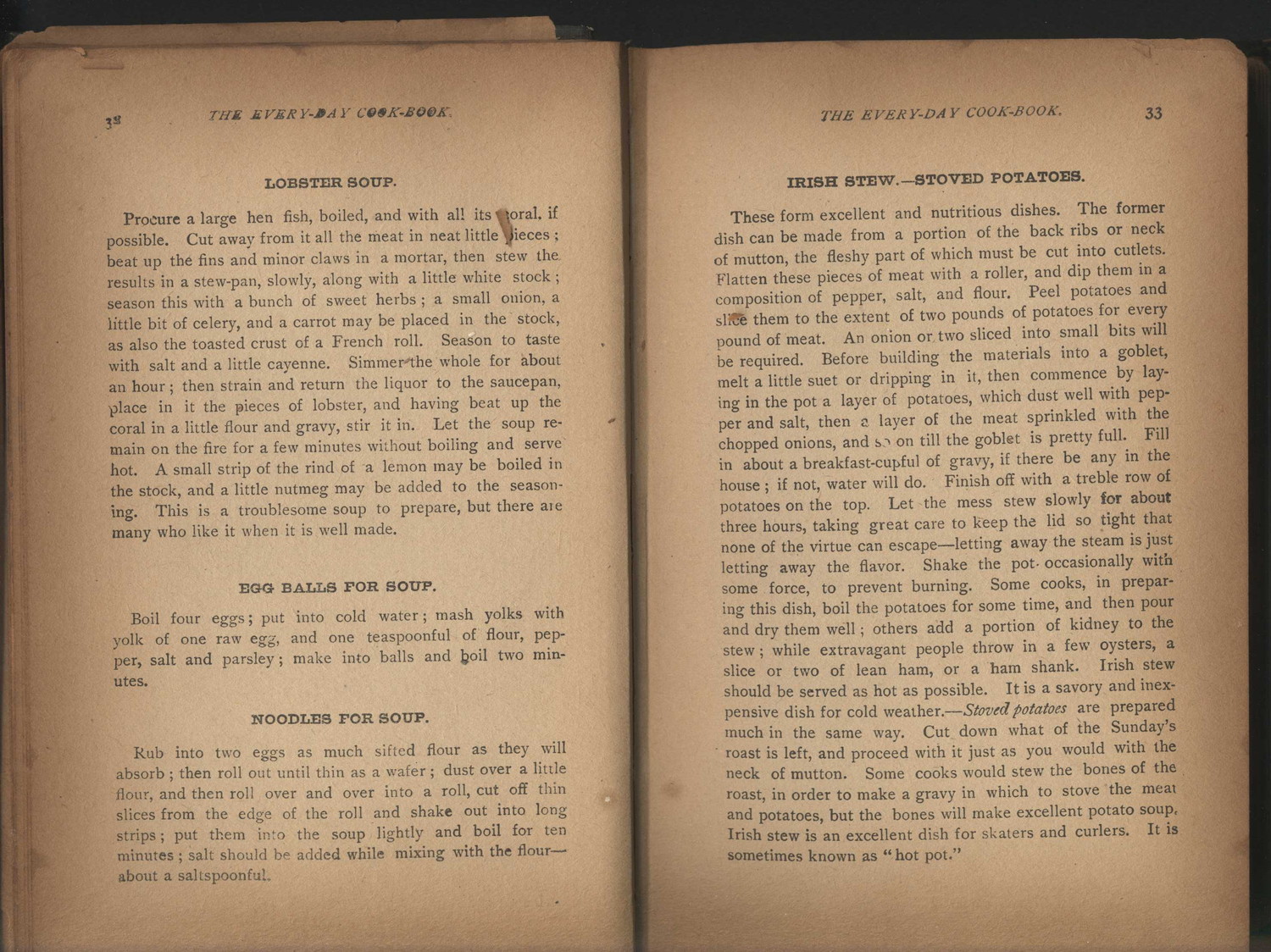 These form excellent and nutritious dishes. The former dish can be made from a portion of the back ribs or neck of mutton, the fleshy part of which must be cut into cutlets. Flatten these pieces of meat with a roller, and dip them in a composition of pepper, salt, and flour. Peel potatoes and slice them to the extent of two pounds of potatoes for every pound of meat. An onion or two sliced into small bits will be required. Before building the materials into a goblet, melt a little suet or dripping in it, then commence by laying in the pot a layer of potatoes, which dust well with pepper and salt, then a layer of the meat sprinkled with the chopped onions, and so on till the goblet is pretty full. Fill in about a breakfast-cupful of gravy, if there be any in the house; if not, water will do. Finish off with a treble row of potatoes on the top. Let the mess stew slowly for about three hours, taking great care to keep the lid so tight that none of the virtue can escape--letting away the steam is just letting away the flavor. Shake the pot occasionally with some force, to prevent burning. 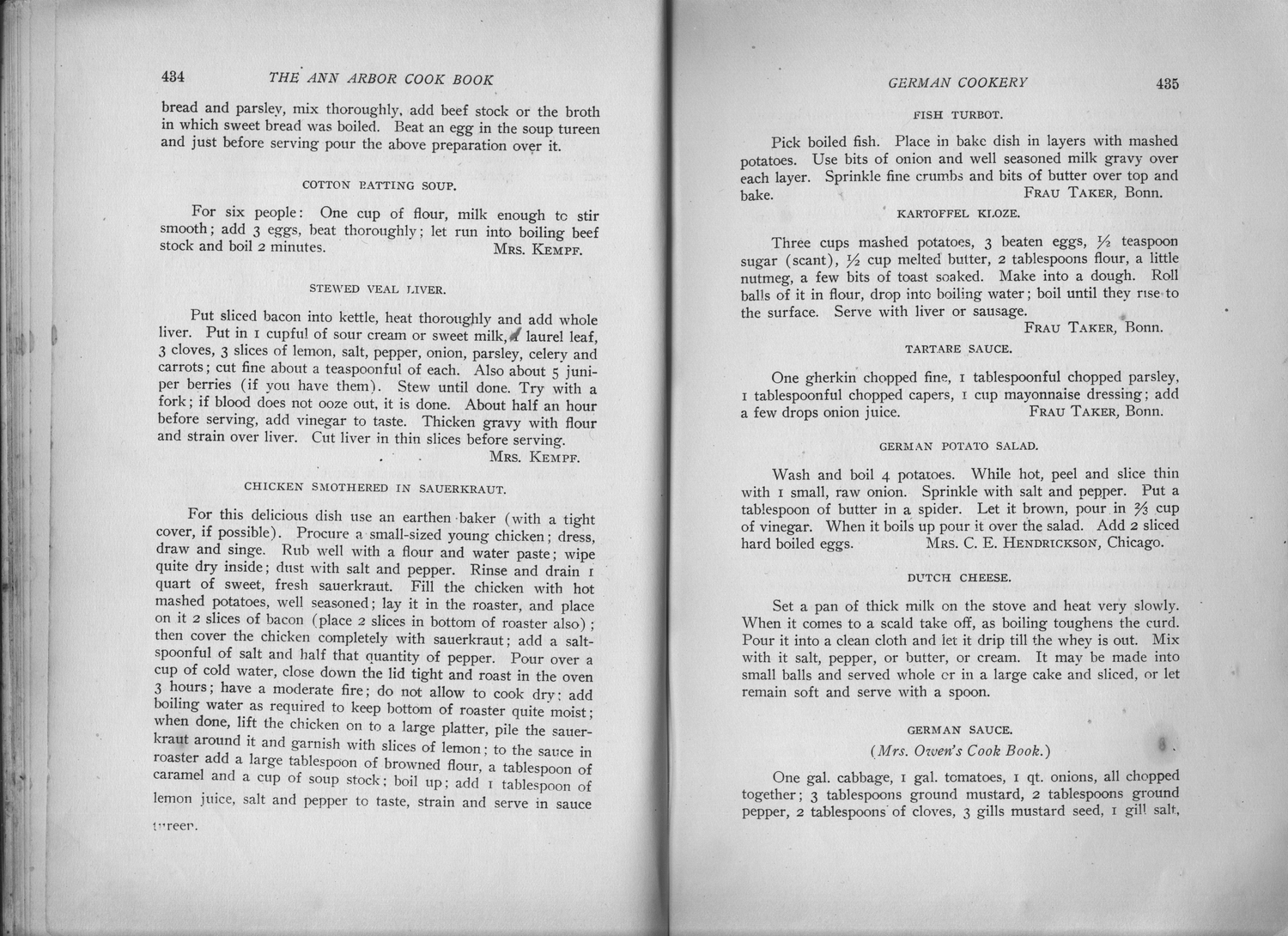 Put sliced bacon into kettle, heat thoroughly and add whole liver. Put in
1 cupful of sour cream or sweet milk, 1 laurel leaf, 3 cloves, 3 slices of lemon, salt, pepper, onion, parsley, celery and carrots; cut fine about a teaspoonful of each. Also about 5 juniper berries (if you have them). Stew until done. Try with a fork; if blood does not ooze out, it is done. About half an hour before serving, add vinegar to taste. Thicken gravy with flour
and strain over liver. Cut liver in thin slices before serving. 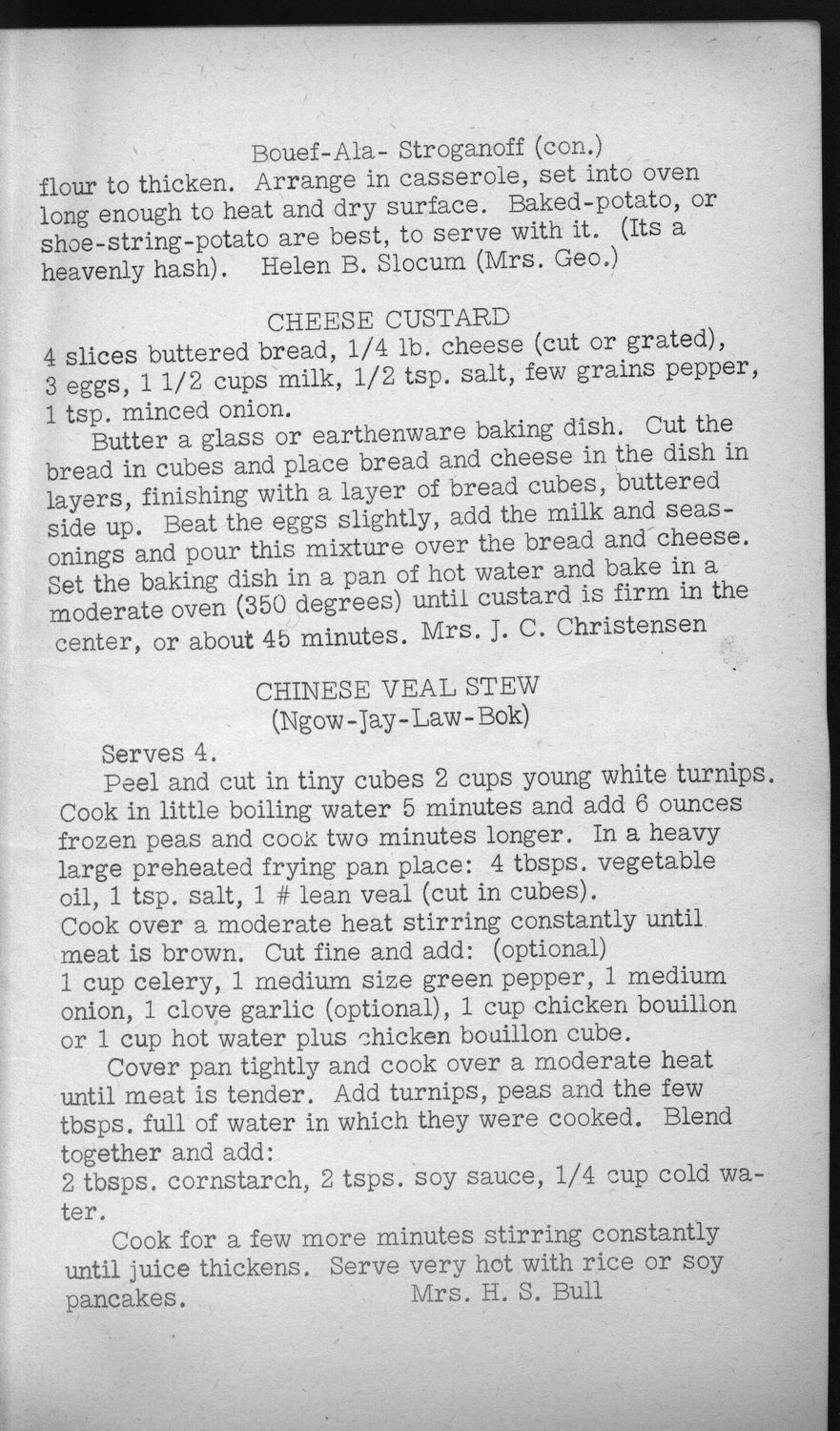 Cover pan tightly and cook over a moderate heat until meat is tender. Add turnips, peas and the few tbsps. full of water in which they were cooked. Blend together and add: 2 tbsps. cornstarch, 2 tsps. soy sauce, 1/4 cup cold water. 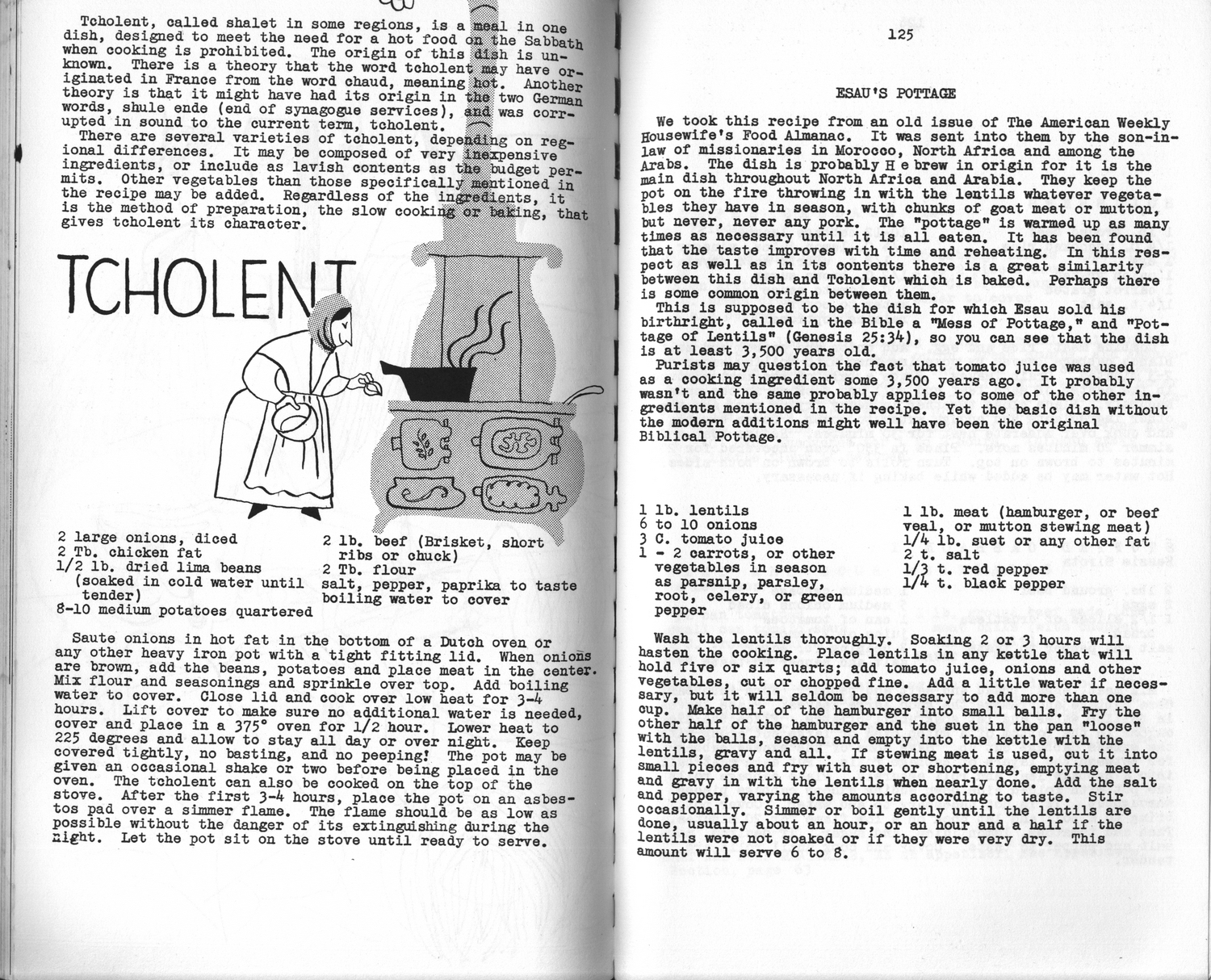 Parent ID
Like Mama Used to Make; a collection of favorite and traditional Jewish dishes

We took this recipe from an old issue of The American Weekly Housewife's Food Almanac. It was sent into them by the son-in-law of missionaries in Morocco, North Africa and among the Arabs. The dish is probably H e brew in origin for it is the main dish throughout North Africa and Arabia.

They keep the pot on the fire throwing in with the lentils whatever vegetables they have in season, with chunks of goat meat or mutton, but never, never any pork. The "pottage" is warmed up as many times as necessary until it is all eaten. It has been found that the taste improves with time and reheating. In this respect as well as in its contents there is a great similarity between this dish and Tcholent which is baked. Perhaps there is some common origin between them.

This is supposed to be the dish for which Esau sold his birthright, called in the Bible a "Mess of Pottage," and "Pottage of Lentils" (Genesis 25:34), so you can see that the dish is at least 3,500 years old. Purists may question the fact that tomato juice was used as a cooking ingredient some 3,500 years ago. It probably wasn't and the same probably applies to some of the other ingredients mentioned in the recipe. Yet the basic dish without the modern additions might well have been the original Biblical Pottage.

Wash the lentils thoroughly. Soaking 2 or 3 hours will hasten the cooking. Place lentils in any kettle that will hold five or six quarts; add tomato juice, onions and other vegetables, cut or chopped fine. Add a little water if necessary, but it will seldom be necessary to add more than one cup. Make half of the hamburger into small balls. Fry the other half of the hamburger and the suet in the pan "loose" with the balls, season and empty into the kettle with the lentils, gravy and all. If stewing meat is used, cut it into small pieces and fry with suet or shortening, emptying meat and gravy in with the lentils when nearly done. Add the salt and pepper, varying the amounts according to taste. Stir occasionally. Simmer or boil gently until the lentils are done, usually about an hour, or an hour and a half if the lentils were not soaked or if they were very dry. This amount will serve 6 to 8.

Parent ID
Like Mama Used to Make; a collection of favorite and traditional Jewish dishes

Saute onions in hot fat in the bottom of a Dutch oven or any other heavy iron pot with a tight fitting lid. When onions are brown, add the beans, potatoes and place meat in the center. Mix flour and seasonings and sprinkle over top. Add boiling water to cover. Close lid and cook over low heat for 3-4 hours. Lift cover to make sure no additional water is needed, cover and place in a 3750 oven for 1/2 hour. Lower heat to 225 degrees and allow to stay all day or over night. Keep covered tightly, no basting, and no peeping! The pot may be given an occasional shake or two before being placed in the oven. The tcholent can also be cooked on the top of the stove After the first 3-4 hours, place the pot on an asbestos pad over a simmer flame. The flame should be as low as possible without the danger of its extinguishing during the night. Let the pot sit on the stove until ready to serve.