The Dunbar Center was first organized as the Dunbar Civic Center in February 1923.  Led by Rev. Ralph M. Gilbert and named for the poet Paul Laurence Dunbar, the Center was located in space rented from the Colored Welfare League at 209-211 N Fourth Ave in downtown Ann Arbor, a building also known as the Kayser Block.

The original purpose of the Dunbar Center was to provide or assist in locating housing for Black laborers and University of Michigan students.  At this time, Ann Arbor was still a very segregated community, with the Black population located almost entirely in the Kerrytown, Fourth Ward, and Lower Town neighborhoods, which made locating housing--especially short-term housing--difficult for member of the Black community.  Some of the recipients of these services were put up in the Kayser Block itself while others were placed in rooms rented from members of the community.  The Dunbar Center worked closely with the Colored Welfare League, which also sought to provide housing as well as locating jobs Black community members.

Expansion of Role Within Community 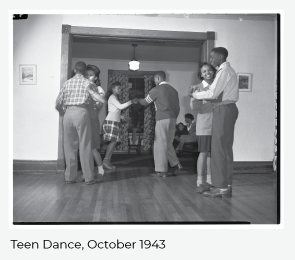 By 1930, the Center had expanded beyond the capacity of the Kayser Block building and moved to a new location at 1009 Catherine St.  It was in the Catherine St location that programming began to expand beyond simply finding housing.

The Dunbar Center extended its offerings as a social services organization.  The Center disributed clothing to the needy, offered support for the unemployed, and provided assistance in finding jobs.  One room was set apart from others to house those who came to the Center without the funds to pay for their time there.

The Dunbar also became more of a community resource at this time, partially out of necessity due to the fact that the YMCA in Ann Arbor was still segregated.  A lending library was established with a small reading room.  Rooms in the Catherine St location were used by other location organizations for weekly meetings or events.  Summer camps were also set up around this time.  As more of these programs were created, demand and use of the Center grew.

Funding for the Dunbar Center in its first 20 years was provided by rent from those who had used the Center for housing, membership subscription fees, and being a part of the Community Fund.  Williams increased funding by pursuing new members, growing membership from 57 to 371, as well as becoming more engaged with the larger community.

Leadership of the Dunbar Center up until this time had been handled by Rev. Gilbert and Savonia L. Carson, who also served as executive secretary of the Colored Welfare League.  In 1936, the decision was made to hire a new executive secretary for the Dunbar Center alone, and Douglas H. Williams was asked to take the position.  Williams had graduated from the Atlanta School of Social Work and focused his energies on making the Center an even more engaged part of the community.

Douglas Williams worked on building up programming at what was now known as the Dunbar Community Center, both social and educational.  He established a series of classes for all age groups, including art, drama, dance, and cooking.  A Boy Scout troop affiliated with the Center was started.  Several musical groups, including a popular male chorus and the Dunbar Civic Center Quintet, practiced there and performed both at the Center and around the community.  Social events such as teen dances, teas, holiday parties, and meetings were held regularly. 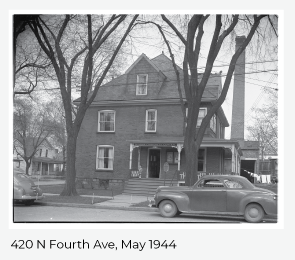 All of this increased activity made the quarters at 1009 Catherine St seem increasingly insufficient.  Within a year, Williams had located a property at 420 N Fourth Ave for the Center to purchase as its permanent home.  It is this location--a house that still stands near the Kerrytown Shops--that is most remembered as the home of the Dunbar Center and the focal point of the Black community.  Black life in Ann Arbor centered around the Dunbar Center during the middle of the twentieth century, making it one of the city's most important and lauded institutions.  Within seven years, the Center had not only paid off the mortgage on their new building but had made significant improvements.

This new space coupled with Williams's increasing efforts around the community to educate about and drum up support for the Center meant programming at the Center increased even more.  Through the 1950s, the Dunbar Center offered programs, social events, and educational opportunities for children, teens, adults, and seniors from the Black community, repeatedly changing this programming to respond to the community's needs and interests.

The Dunbar Center's success did not go unnoticed by the larger community.  By the late 1950s, a desire for a community center that would serve the city's entire population had grown up.  Rather than create a new organization, the Dunbar Community Center voted to change its name to the Ann Arbor Community Center in 1958.  At the same time, it commissioned a new home at 625 N Main St to be designed by architect Alden B. Dow.  Leadership and programming at the Center would remain the same throughout these changes but with a reach expanded to the entire populace.

In 1960, Douglas Williams passed away after leading the Center for 24 years.  His replacement was another graduate of the Atlanta School of Social Work, Walter W. Hill, Sr. Under Hill's direction in 1972, the Ann Arbor Community Center purchased property from the Girl Scouts to establish its own campground called Camp Takona.  The Ann Arbor Community Center has continued the work of the Dunbar Center with social, educational, and social service programming. 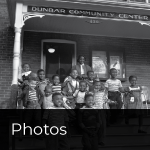 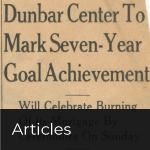 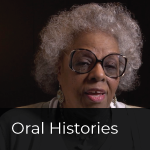