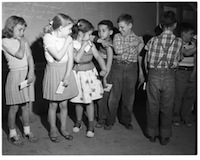 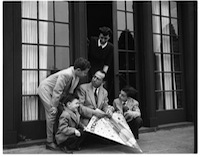 Francis was hired by the National Foundation for Infantile Paralysis (often called the March of Dimes after its major fundraiser) to conduct tests to determine if Salk’s vaccine worked and was safe. Using blind studies so that none of the almost two million children who were tested knew whether they were receiving the vaccine or a placebo, he found that it met both criteria. The children who had received the placebo were at the head of the line to get the real vaccine.

On April 11, the day before Francis presented his report, officials from the polio foundation and the scientific world began arriving by train. They were welcomed with much fanfare at the New York Central Station (now the Gandy Dancer). The most important arrival was Salk, who came with his wife and three boys. The two oldest had been born in the old maternity wing of University Hospital, which by an interesting coincidence had been turned into Francis’s evaluation office where he and his assistants did the monumental job of collating the data, which in the days before computers was very labor intensive. Pictures show rows of file cabinets, a card catalog, and piles and piles of papers.

Francis had refused to give any prior information on his findings, not even a hint if they were positive or negative, saying he wanted to make absolutely sure that everything was accounted for. He presented his report at a closed meeting by invitation only. As well as scientists, the audience included 400 reporters. When Francis finished, copies of his report were wheeled in on a cart. The reporters started grabbing them and running to telephones to phone their respective newspapers, magazines, radio and TV networks. A room had been set aside for the reporters with four teletype machines and ten tables with seating for six people sharing three phones. The Ann Arbor News let the AP use their darkroom to send pictures to their wire services. 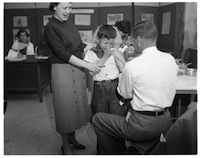 Three weeks after Francis announced his findings, local children began getting the vaccine. On April 29, 1955, one hundred volunteer doctors began vaccinating first and second graders at thirty area schools. The newspaper was filled with pictures of brave children getting their shots. The 7000 doses were provided by the polio foundation. They arrived at the county health department a few days earlier and were stored at the police department.

The county health department found the money to buy enough vaccine to inoculate the more than a thousand children receiving welfare support, again using volunteer doctors. The rest of population went through their private doctors. The physicians were so overwhelmed with calls that a post card system was set up for parents to send in and even these got so out of hand that the doctors asked that parents only request shots for children at least one year old and not yet in first grade. The decision to start with the younger children was no doubt made because that was the age group most likely to die of the disease. Parental permission forms were needed but hardly any parents refused. In the first batch, out of 804, only ten said no. 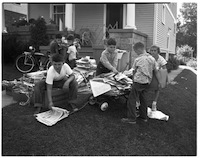 Ann Arbor, like the rest of the nation, had been grappling with polio for years before the vaccine. The first mention in the Ann Arbor News was in 1934 when a National Committee of Birthday Balls was organized across the nation on FDR’s birthday, with money earmarked for polio research. The local ball committee included Ann Arbor’s mayor Robert Campbell and the editor of the Ann Arbor News Arthur Stace. In the following years the Ann Arbor News was filled with human interest articles about victims coping with the dreaded disease- a women spending half the day in therapy and the other half learning accounting, a girl playing the piano, a boy able to ride a bike while wearing braces. The public library loaned out a device so sufferers in the hospital who couldn’t raise their head could read on the ceiling.

There was also much fundraising - kids having backyard carnivals or circuses, a bake sale at the hospital, newspaper drives, service clubs like the Eagles taking on projects. The metal workers and the electrical unions made replicas of iron lungs that could be used as canisters to put money in. The March of Dimes was a yearly event when mothers went door to door collecting money, often in dimes. (FDR’s picture is on the dime for this reason.) These articles continued after the announcement of the vaccine, but began to taper off as more people were protected.

Francis died in 1969. Salk, who died in 1995, returned to Ann Arbor twice. In 1977 he was the featured speaker at that year’s U-M Medical School graduation. In 1995, he made another visit, this one on April 12, exactly 40 years after the announcement that his vaccination was effective and safe and at the same place, Rackham Auditorium, to be honored by the March of Dimes. At that time he said his work was focused on finding a vaccine against HIV.

See all Oldnews articles and photos on the history of polio and the polio vaccine in Ann Arbor.