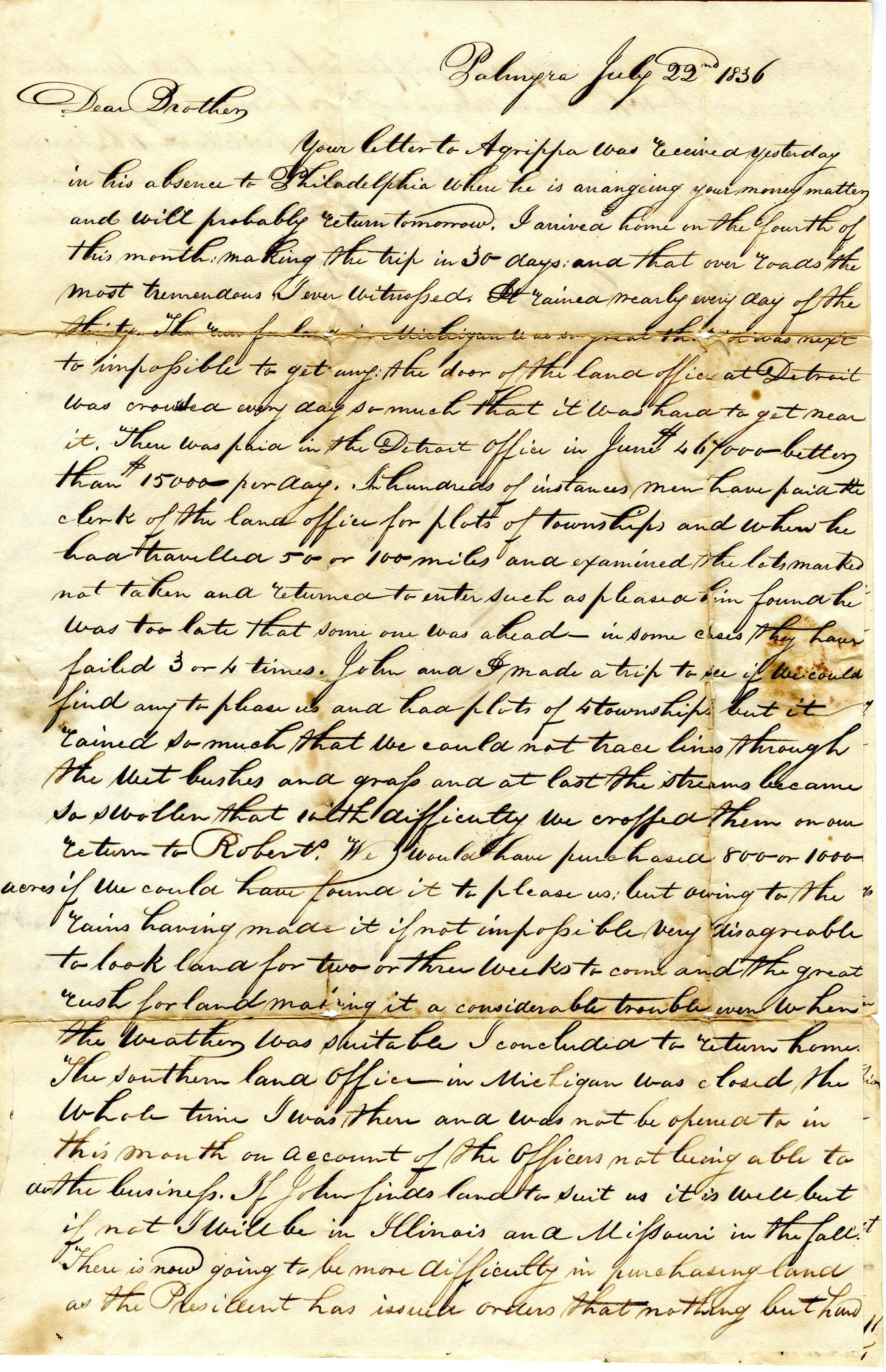 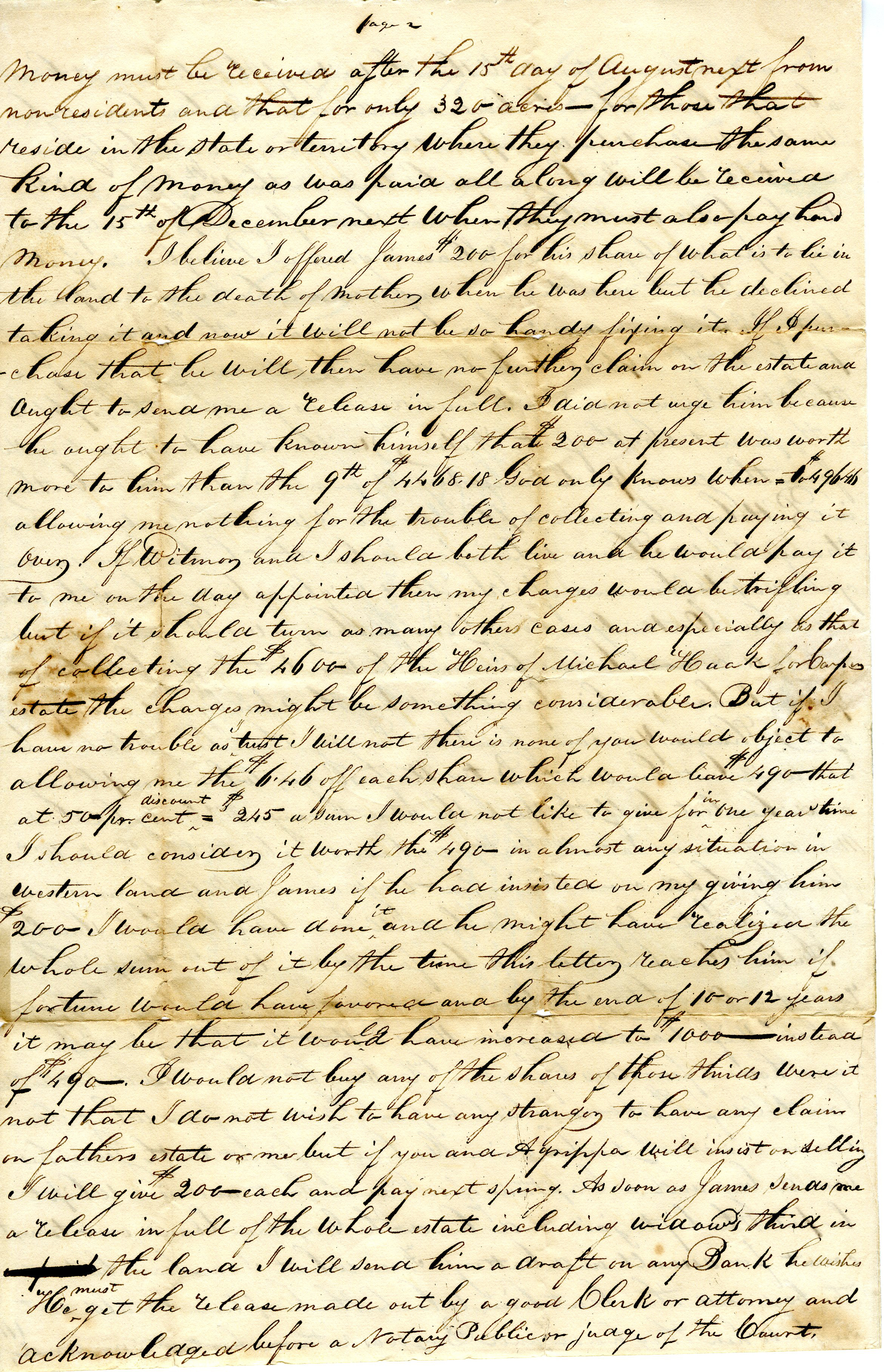 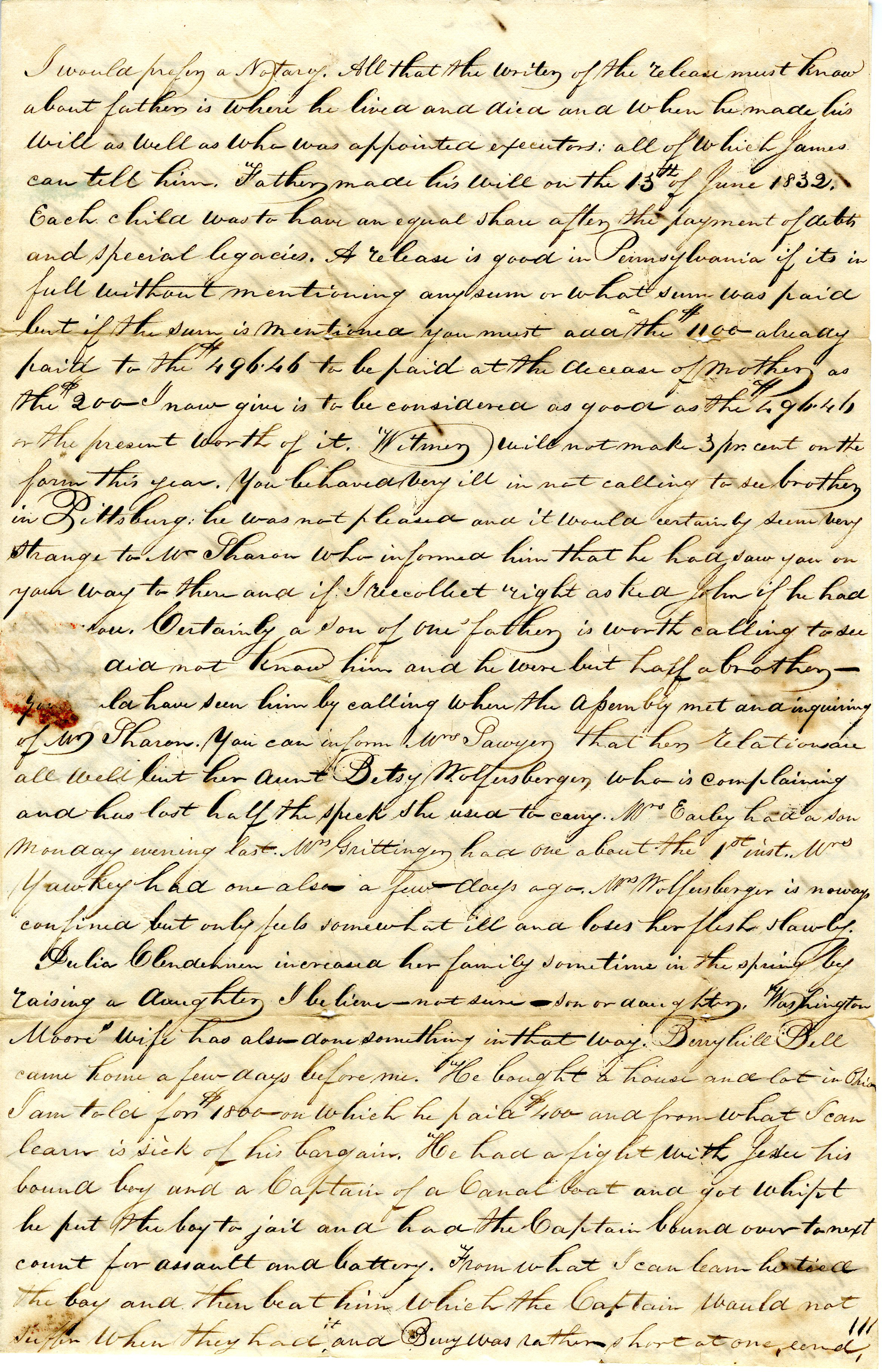 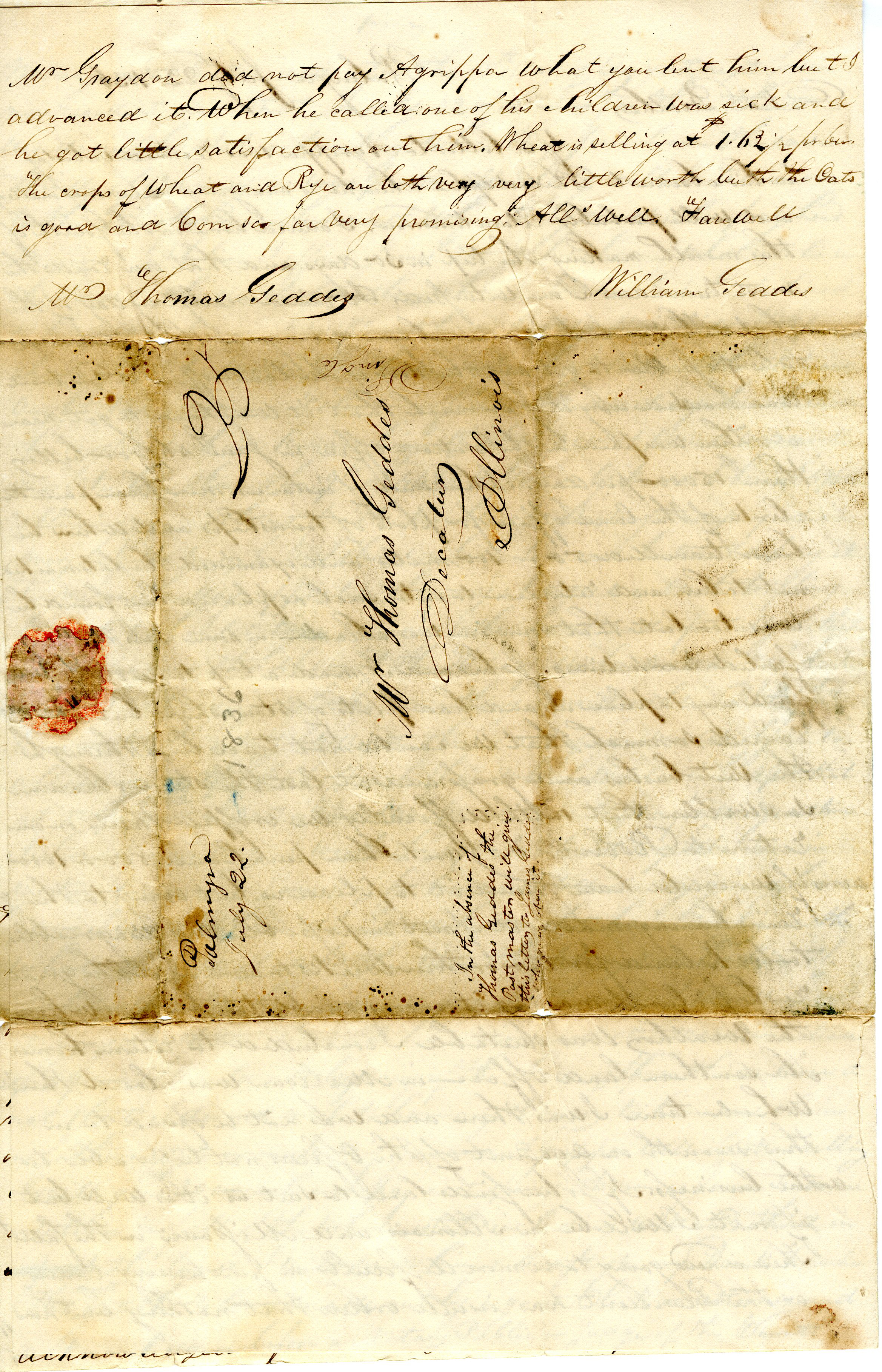 Dear Brother [Thomas Geddes] Your letter to Agrippa was received yesterday in his absence to Philadelphia where he is arrangeing your money matters and will probably return tomorrow. I arrived home on the fourth of this month: making the trip in 30 days: and that over roads the most tremendous I ever witnefsed. It rained nearly every day of the thirty. The run for land in Michigan was so great that it was next to impofsible to get any: the door of the land office at Detroit was crowded every day so much that it was hard to get near it. There was paid in the Detroit office in June $467000 better than $15000 per day. In hundreds of instances men have paid the clerk of the land office for plots of townships and when he had travelled 50 or 100 miles and examined the lots marked not taken and returned to enter such as pleased him found he was too late that some one was ahead â in some cases they have failed 3 or 4 times. John and I made a trip to see if we could find any to please us and had plots of 4 townships but it rained so much that we could not trace lines through the wet bushes and grafs and at last the steams became so swollen that with difficulty we croffed [crossed] them on our return to Roberts. We would have purchased 800 or 1000 acres if we could have found it to please us: but owing to the rains having made it if not impofsible very disagreable to look land for two or three weeks to come and the great rush for land making it a considerable trouble even when the weather was suitable I concluded to return home. The southern land office in Michigan was closed the whole time I was there and was not be opened to in this month on account of the officers not being able to do the businefs. If John finds land to suit us it is well but if not I will be in Illinois and Mifsouri in the fall. There is now going to be more difficulty in purchasing land as the President has issued orders that nothing but hard

money must be received after the 15th day of August next from nonresidents and that for only 320 acres â for those that reside in the state or territory where they purchase the same kind of money as was paid all along will be received to the 15th of December next when they must also pay hard money. I believe I offered James $200 for his share of what is to lie in the land to the death of mother when he was here but he declined taking it and now it will not be so handy fixing it. If I purchase that he will then have no further claim on the estate and ought to send me a release in full. I did not urge him because he ought to have known himself that $200 at present was worth more to him than the 9th of $4468.18 God only knows when = to $49646 [?] allowing me nothing for the trouble of collecting and paying it over. If Witmer and I should both live and he would pay it to me on the day appointed then my charges would be trifling but if it should turn as many other cases and especially as that of collecting the $4600 of the Heirs of Michael Haak for Carpers estate the charges might be something considerable. But if I have no trouble as I trust I will not there is none of you would object to allowing me the $6.46 off each share which would leave $490 that at 50 pr. cent discount = $245 a sum I would not like to give for in one years time I should consider it worth the $490 in almost any situation in western land and James if he had insisted on my giving him $200 I would have done it and he might have realized the whole sum out of it by the time this letter reaches him if fortune would have favored and by the end of 10 or 12 years it may be that it would have increased to $1000 instead of $490. I would not buy any of the shares of those thirds were it not that I do not wish to have any stranger to have any claim on fathers estate or me but if you and Agrippa will insist on selling I will give $200 each and pay next spring. As soon as James sends me a release in full of the whole estate including widows third in the land I will send him a draft on any Bank he wishes He must get the release made out by a good Clerk or attorney and acknowledged before a Notary Public or judge of the Court.

I would prefer a Notary. All that the writer of the release must know about father is where he lived and died and when he made his will as well as who was appointed executors: all of which James can tell him. Father made his will on the 13th of June 1832. Each child was to have an equal share after the payment of debts and special legacies. A release is good in Pennsylvania if its in full without mentioning any sum or what sum was paid but if the sum is mentioned you must add the $1100 already paid to the $496.46 to be paid at the decease of mother as the $200 I now give is to be considered as good as the $496.46 or the present worth of it. Witmer will not make 3 pr. cent on the farm this year. You behaved very ill in not calling to see brother in Pittsburg: he was not pleased and it would certainly seem very strange to Mr Sharon who informed him that he had saw you on your way to there and if I recollect right asked John if he had seen you. Certainly a son of ones father is worth calling to see [smudged by seal] did not know him and he were but half a brother â you could have seen him by calling where the afsembly met and inquiring of Mr Sharon. You can inform Mrs Sawyer that her relations are all well but her aunt Betsy Wolfersberger who is complaining and has lost half the speck she used to carry. Mrs Earley had a son Monday evening last. Mrs Grittinger had one about the 1st inst. Mrs Yawkey had one also a few days ago. Mrs Wolfersberger is noways confined but only feels somewhat ill and loses her flesh slowly. Julia Clendennen increased her family sometime in the spring by raising a daughter I believe â not sure son or daughter. Washington Moores wife has also done something in that way. Berryhill Bell came home a few days before me. He bought a house and lot in Ohio I am told for $1800 on which he paid $400 and from what I can learn is sick of his bargain. He had a fight with Jesee his bound boy and a Captain of a Canal boat and got whipt he put the boy to jail and had the Captain bound over to next count [court] for assault and battery. From what I can learn he tied the boy and then beat him which the Captain would not suffer When they had it and Berry was rather short at one end!!!

Mr Graydon did not pay Agrippa what you lent him but I advanced it. When he called: one of his children was sick and he got little satisfaction out him. Wheat is selling at $1.63 1/2 pr bu. The crops of Wheat and Rye are both very very little worth buth [but] the Oats is good and Corn so far very promising: Alls well Farewell

who may open it.